Ports in the global liner shipping network: Understanding their position, connectivity, and changes over time

In the 2nd quarter of 2020, there were 939 container ports in the world that received regular liner shipping services. If all ports had direct services between each-other, there would be 440,391 direct port-to-port liner shipping connections.[i] In reality, however, only 12,748 port pairs have such direct connections, i.e. 2.9 per cent of the theoretical total. For trade between the remaining 97.1 per cent of port pairs, containers need to be transhipped in other ports. The least connected port pairs require up to 6 transhipments, with 7 direct port-to-port services and 14 port moves for one trade transaction.[ii]

To examine the characteristics of the liner shipping network, we use data provided to UNCTAD by MDS Transmodal. The idea for this analysis was inspired by a recent article by Kenza Bouhaj on the most connected economists.

Ports as nodes in the shipping network

We describe a port’s position in the shipping network by the following two metrics: 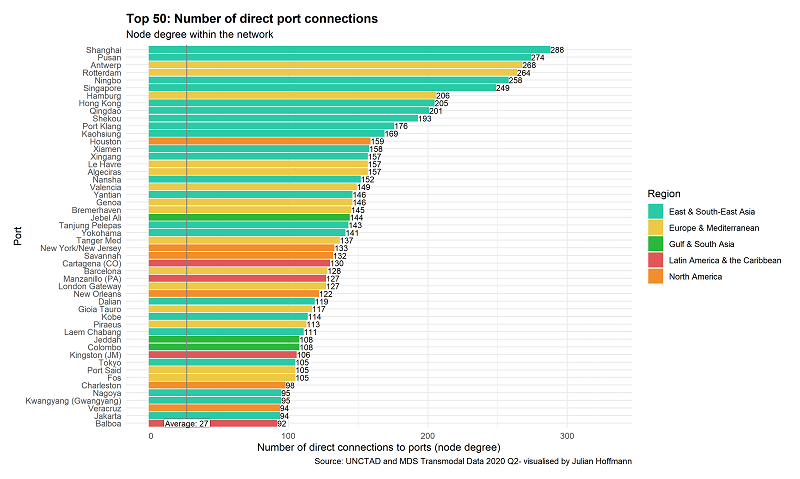 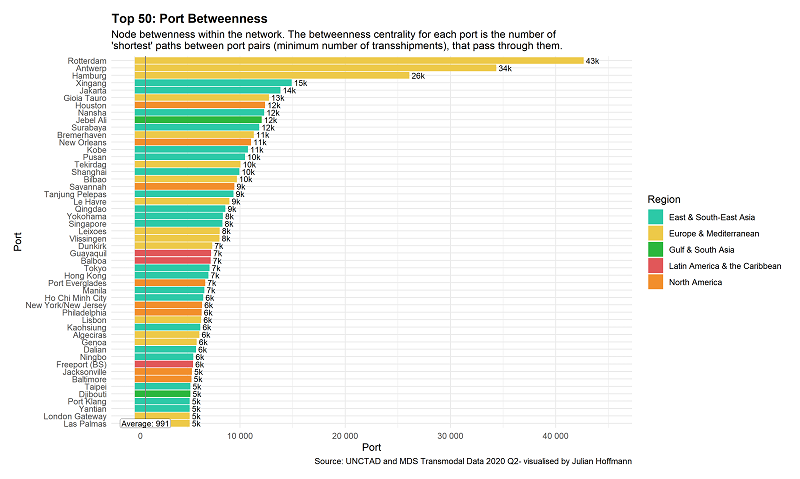 The best-connected ports in 2020

Under the criteria “betweenness”, the major European ports are better connected than the major Asian ports, while under the criteria “degree” Asian ports are better connected. Some of the ports with a high betweenness do not have a high number of direct connections. However, they are centrally located in their region and can be the ports best located to connect other ports through them (Figure 3). 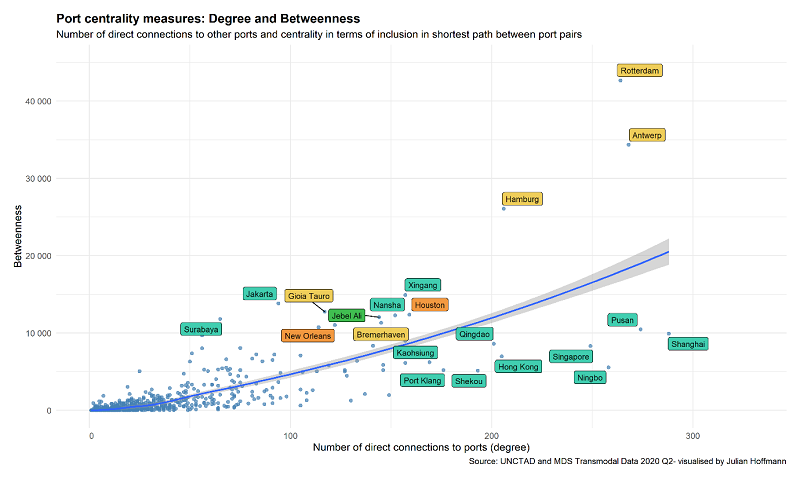 How much choice do shippers have?

Apart from the route choices for port-to-port connections discussed above, shippers may also have different carriers to choose from. Among the 12,748 direct port-to-port connections that do not require a transhipment in 2020, on 6,017 of them (47.2 per cent) services are provided by only one single company, while on 2,751 routes (21.6 per cent) there is competition among two providers, and on the remaining 3,980 port pairs (31.2 per cent) there are three or more carriers offering their container shipping services (Figure 4).

The port pair that is best connected through direct services is Ningbo-Shanghai, with 52 liner shipping companies providing direct services between the two ports. It is followed by Port Klang – Singapore (41 companies), Busan – Shanghai (38), and Shanghai – Quingdao (37).

All top 50 best connected port pairs are on intra-regional routes, almost exclusively intra-Asian, except for two intra-European connections, which are Antwerp – Rotterdam with 24 companies and Hamburg – Rotterdam with 23 companies. In other regions, too, it is mostly neighbouring ports that are best connected with each-other. These intra-regional connections do not carry much trade between the neighbouring ports, but the high connectivity is the result of being connected to the same overseas routes, combined with feedering and transhipment services.

Figure 4: Histogram of the number of companies providing direct services between port pairs, 2020 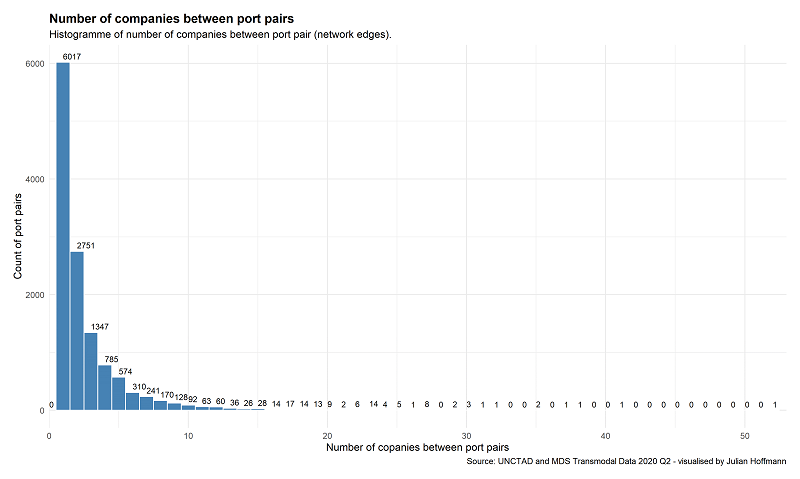 A map of the global shipping network

Figure 5 illustrates the world shipping network in 2020, with the following four dimensions.

The top twelve ports by degree (Figure 1) as well as ten other ports are labelled for illustration purposes. The major East Asian and European ports are clearly positioned at the centre of the network, and within each region close to each-other. Coatzacoalcos in Mexico and Malacca in Malaysia, on the other hand, are on opposite sides of the network and examples of port-to-port connections that would require a high number of transhipments.

Ports in the same geographical region are often also closely connected in the network, but by far not always; many ports from different regions (i.e. with different colours) may also be well connected with each-other through direct services and many common direct connections, which then places them close to each-other in the chart of the network. 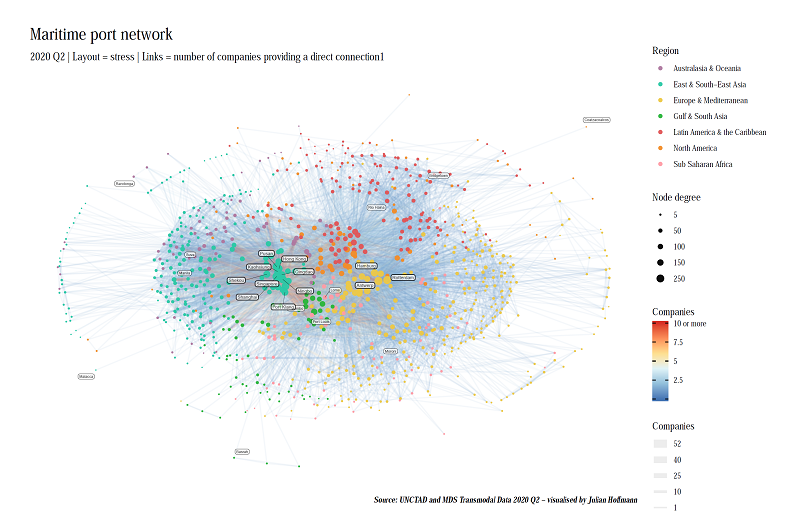 What has changed in the last 14 years?

In order to capture the position of a country or port in the global liner shipping network, UNCTAD in 2004 developed the Liner Shipping Connectivity Index (LSCI). The LSCI is today generated jointly by UNCTAD and MDS Transmodal, applying an updated methodology with six components.[i]

The six components from which the LSCI is generated include the number of companies that provide direct services, as well as the number of port or country pairs with direct connections, both of which we have also analysed in the present article.

The LSCI incorporates four further variables, notably 1) the size of the largest container ship, 2) the number of services, 3) the total deployed carrying capacity, and 4) the number of services, which we have not covered in the present article. For each one of these additional components, similar network analysis as presented in this article could be undertaken. However, most of the core metrics, such as the node degree and the node betweenness, or the overall structure of the network in terms of directly connected ports or the number of necessary transhipments, will not change if instead of the number of companies we incorporate any of the other four components of the LSCI.

[ii] When speaking about a “direct” service between two ports A and B, we mean that no transhipment of the container is necessary; it does not mean that the ship may not stop in other ports on its journey from A to B. For example, a container exported from Antofagasta to Bremerhaven may be put on a ship that provides a direct service, even though it stops in Callao on its way, or the container may be transhipped for example in Cartagena, to connect two different shipping services. In the former case, we speak about a direct service; in the letter case, we speak about a service that requires a transhipment. To be able to undertake this type of analysis, it is necessary to look at the complete shipping schedules; it would not be enough to look at port-to-port ship movements alone as provided for example by AIS data.

[iii] The chart and all metrics in this article are generated applying the packages in R iGraph (https://igraph.org/r/), ggraph (https://cran.r-project.org/web/packages/ggraph/index.html) and ggplot (https://ggplot2.tidyverse.org/reference/ggplot.html).

[iv] UNCTAD publishes the country level LSCI and the port level LSCI, as well as the bilateral country-to-country Liner Shipping Bilateral Connectivity Index (LSBCI) on-line (http://stats.unctad.org/maritime). MDS Transmodal also publishes the components of the LSCI for the top 100 ports (www.portlsci.com). A special chapter in the Review of Maritime Transport 2017 provides additional analysis of the LSCI and the LSBCI. 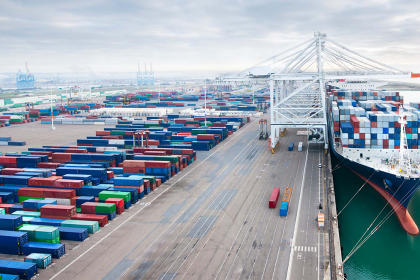