Trade Ministers from landlocked developing countries (LLDCs) meeting in Almaty, Kazakhstan praised UNCTAD's consistent support to their members and requested UNCTAD to continue to assist LLDCs in their efforts to become members of the World Trade Organization.

Out of the 31 LLDCs, 9 are not yet members of the WTO. Except for Turkmenistan, 8 of them are, however, in the accession process. They are Afghanistan, Azerbaijan, Bhutan, Ethiopia, Kazakhstan, the Lao People's Democratic Republic, Tajikistan and Uzbekistan. Half of the acceding LLDCs are also least developed countries (LDCs).

During the Ministerial meeting in Almaty, Ministers and senior officials from acceding countries expressed their appreciation of the valuable support that their respective countries have received from UNCTAD.

Ms. Gulchera Bazarova, Deputy Minister of Economic Development and Trade of Tajikistan said her country is grateful for the advisory missions and training courses organized by UNCTAD to help the economies of Central Asia that are in the process of accession to better understand the opportunities and challenges for acceding countries.

In order to accede to the WTO, each acceding country must undertake negotiations with trading partners that are WTO members. Such trade negotiations are complex and usually take many years to complete. The accession process requires considerable national policy reforms. It also requires that countries prepare themselves in advance with clear understanding of how the reforms they are willing to undertake affects their trade patterns and economic development. In this respect, UNCTAD’s unbiased advice and support helps countries to be informed negotiating partners.

In the Almaty Ministerial Declaration adopted at end of the Fourth Meeting of LLDCs' Trade Ministers on 14 September, the Ministers stated in paragraph 30: "LLDCs, including through their Missions in Geneva, should strengthen their substantive cooperation with UNCTAD on matters of particular interest to LLDCs, including trade, development and interrelated issues in the areas of finance, technology, investment and sustainable and inclusive development."

At the same conference, Ms. Anne Miroux, Director of UNCTAD's Division on Technology and Logistics, highlighted the importance of trade facilitation for LLDCs' access to world markets, crossing borders and overcoming distance. She pointed to the need for simplifying documentation and customs procedures, working for an ambitious trade facilitation agreement at the WTO, inclusion of trade facilitation. 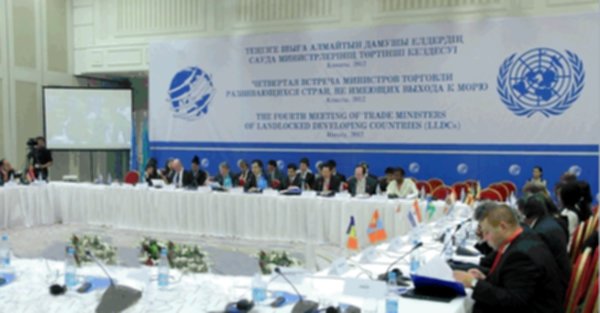