The four-year, €5.5 million ($6.9m) project will give strategic support to the oil-dependent African nation’s efforts to reignite growth and trade its way out of least developed country status.

The European Union and UNCTAD launched today in Luanda a four-year, €5.5 million ($6.9m) project aimed at helping Angola diversify its economy and reduce its dependence on oil, which accounts for a whopping 93% of total merchandise exports.

After decades of civil war ended in 2002, Angola’s economy took off thanks to abundant oil reserves, which fueled a decade of double-digit growth. The steady flow of petrodollars financed new roads and fancy skyscrapers in Luanda, the nation’s capital and now one of the world’s most expensive cities.

But when the price of oil crashed in 2014, the economy ground to a halt and growth flatlined, dropping below 1% in 2016. With fuel exports providing less revenue for the government, public debt has more than doubled since 2013 and sits above 60% according to the finance ministry. 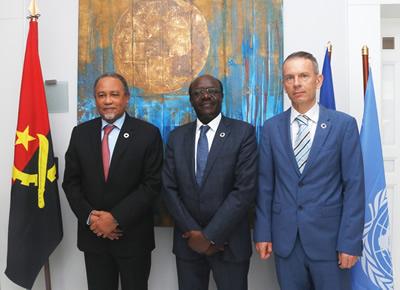 Speaking at a ceremony held at the Ministry of Commerce, UNCTAD Secretary-General Mukhisa Kituyi said the project, titled EU-UNCTAD Joint Programme for Angola: Train for Trade II, marked “an important step for Angola” in its efforts to restructure the economy.

“The objective of the EU-UNCTAD Joint Programme for Angola is to improve human and institutional capacities to foster appropriate economic diversification policies in Angola,” Dr. Kituyi said.

“Together with our European Union partners, UNCTAD is drawing on its wealth of expertise to provide targeted assistance and address development challenges from multiple angles,” he added.

“The process of diversifying the national expert basket includes the opening of new clusters identified in emerging global trends,” he added, hailing UNCTAD’s work on the creative economy and saying that Angola had great potential in the arts and handicraft sectors.

European Union Head of Delegation Tomás Ulicný underscored that the programme was part of a long-term relationship with Angola.

“The cooperation between the European Union and Angola over the past 20 years has essentially been based on capacity building both institutional and human resources,” Mr. Ulicný said.

“In the framework of Train for Trade, the strategic partnership with UNCTAD will provide personalized support, tailored to the needs of the country and corresponding to the priorities of the Government,” he added.

The project’s ceremonial start will help raise political awareness among key government institutions about the project’s components and implementation strategy and enhance coordination between the ministries and agencies involved.

Following the 11 April launch, Dr. Kituyi and UNCTAD experts were due to hold meetings with public and private sector actors in the country to discuss in greater detail the content and action plan for each component.

UNCTAD's role in the EU-funded project is to address the problems that the Angolan government has identified as major hurdles to economic diversification and to growth that is more inclusive and sustainable.

Support will focus on 6 strategic components:

For each component, UNCTAD will conduct studies and develop training courses and workshops for public and private sector actors.

For example, project managers have already identified with the government the need for a National Green Export Review – an in-depth assessment of less environmentally-harmful sectors for which Africa’s second biggest oil producer could have a competitive advantage. Such a study will be crucial to identify the right non-oil industries that the government should support and for which it should focus efforts to attract investment.

This is relatively high compared to other sub-Saharan African countries and remarkable for a least developed country (LDC), and Angola aims to become an upper-middle income country by 2020 and graduate from LDC status by 2021.

In 2015, the country was tipped for graduation based on the “income-only” criteria, which allows a country to leave the UN special category if its gross national income per capita is double the threshold level, which was $1,242 at the time.

But graduation based on income only would not necessarily mean that Angola’s economy – and population – is any less vulnerable to the whims of global oil markets, as the UNCTAD Least Developed Country Report 2016 pointed out.

"Graduation is not the winning post of a race to escape from the LDC category. It is the first milestone in the marathon of sustainable long-term development," Dr. Kituyi has said previously. "So how a country graduates is just as important as when it graduates."

That’s why UNCTAD promotes what it calls "graduation with momentum” – laying the economic foundations necessary for long-term development, the kind that lifts large segments of a population out of poverty.

Paul Akiwumi, director of UNCTAD's division for Africa and LDCs, said: “Despite Angola’s exceptional improvement in per capita earnings, mainly due to the country’s successful oil sector, progress in economic diversification and advancement in social and human-capital indicators has been limited.”

“The country needs reformulated policies and reinforced institutions to help diversify its economy and maximize regional and global trade opportunities,” he said.