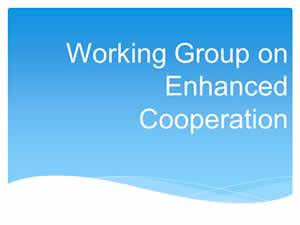 The sixty-seventh session of the General Assembly, held on 21 December 2012, adopted resolution 67/195 which invited the Chair of the CSTD to establish the Working Group on Enhanced Cooperation.

Download: Membership of the Working Group on Enhanced Cooperation

This meeting is the third in a series of meetings intended for an exchange of views among stakeholders and to report the outcomes to the CSTD at its seventeenth session in 2014.

Ms. Anne Miroux
Director of UNCTAD Division on Technology and Logistics and Head of the CSTD Secretariat
e-mail: [email protected]