What do honey, cashews and black-eyed peas have in common?

Besides being delicious, they’re all sustainable products that could help move the economic needle in countries that need to diversify their exports.

That’s why the UNCTAD National Green Export Review (NGER) project is working with nations as varied as Madagascar, Moldova and Senegal to identify the trade potential of such eco-friendly products.

But its review showed the landlocked Eastern European nation that it could triple production and make the sector a bigger source of export revenue and jobs. 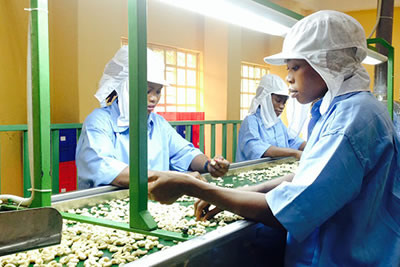 According to a recent evaluation of the project delivery in 10 countries, the NGER project has been successful in guiding policymakers toward export sectors that benefit the planet as much as people – an important move in the fight against environmental degradation.

“Our work is most rewarding when it brings meaningful change on the ground. The NGER project does exactly that,” said Pamela Coke-Hamilton, director of UNCTAD’s trade and commodities division, which manages the project.

“Government and private sector alike work together to create new policies and commit to cooperative actions. This changes people’s lives by generating a cleaner environment and new income opportunities.”

For example, Senegal currently exports more than three quarters of its cashews without any added value.

The review showed that the coastal West African country stood to capture more than 16% of the cashew retail price by investing in de-shelling and early processing operations – a strategy that would also boost local employment and incomes.

“The project demonstrates how countries can sustainably enhance gains from their rich commodity endowments by exploring green exports,” Ms. Coke-Hamilton said, adding that a recent UNCTAD report illustrates how challenging this is for developing nations.

More on the horizon

Since 2014, the project has been active in 7 countries in addition to Madagascar, Moldova and Senegal, including: Angola, Ecuador, Ethiopia, Lebanon, Morocco, Oman and Vanuatu.

These nations are pleased with the results.

The evaluation found that “the level of satisfaction with the quality of the project’s activities and products was very high,” adding that the NGERs “achieved concrete results by allowing national stakeholders to prioritize key issues, identify problems and craft solutions.”

“[The project] contributed to enhancing the capacity of beneficiaries to effectively plan and develop measures to improve productive and export capacity,” it said.

The project’s success has led almost 20 additional countries to ask for their own NGERs – a move in line with the evaluation report’s recommendation for UNCTAD to extend the project to other nations and sectors.

Eight of the reviews were funded by the United Nations Development Account.

Additional NGERs have been made possible with additional funding from the Islamic Development Bank, which financed the project in Senegal, and the European Union, which is funding the Angola NGER as part of a mega US$5.5-million project to support the country’s efforts to diversify its economy.