Twenty-five researchers from 16 countries in sub-Saharan Africa have taken part in an UNCTAD regional workshop on trade and gender analysis. The event was hosted by the North-West University in Potchefstroom, South Africa, on 15-19 June, and funded by the Government of Finland. 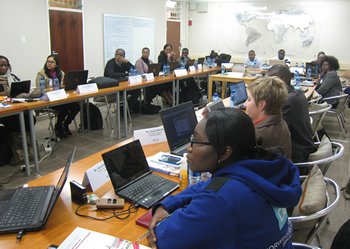 The workshop, jointly organized by UNCTAD's Virtual Institute and the Trade, Gender and Development Section, aimed to equip African researchers with the knowledge needed to analyze the two-way relationship between trade and gender and ultimately produce gender-aware policy recommendations.

The second volume of the UNCTAD teaching manual on trade and gender, "Empirical analysis of the trade and gender links" was the basis for the activities conducted in South Africa.

Participants were trained in state-of-the-art research methodologies on trade and gender and learned about the sources, data and indicators used in empirical analysis in this area.

They also had the opportunity to engage in hands-on practice using the Stata statistical software.

"What I have learnt in the workshop exceeded my expectations," Zibanani Kahaka of the University of Botswana said. "It provided a deeper insight into econometric models and the use of Stata both at the macro and micro levels."

In the words of Angela Kiconco, of the Uganda Bureau of Statistics: "The lectures were informative, the applied sessions enlightening, and the hands-on exercises fascinating."

"I have started working on a paper on climate-related changes in economic activities for men and women, with a special focus on women," Hellen Adzo Seshie-Nasser of the University of Ghana said. "The tools I have gotten from this workshop have given me a clear picture of how to go about the gender analysis in this paper."

All the participants left the workshop determined to use the newly acquired knowledge and skills in their work.

With regard to teaching, participants' plans include enriching academic courses on international trade and development economics with specific gender components.

The workshop also provided ideas for further study and UNCTAD stands ready to support this. Indeed, selected participants will be able to get financial support and expert guidance from UNCTAD in the form of mentored research projects.

Several participants intend to use the acquired knowledge to advise policymakers or provide them with research inputs. Belmondo Tanankem Voufo, of the Ministry of Economy, Planning and Regional Development, Cameroon, said: "My country is at the moment in the process of implementing the Economic Partnership Agreement with the European Union. With the knowledge acquired in the workshop, I will be in a position to advise my minister on the best options to envisage in the framework of this agreement with regard to gender."

Overall, the workshop was considered important - not only for participating academics, but also for their countries. As Alphonse Nkareng Letsie of the Policy Analysis and Research Institute of Lesotho put it: "There is a limited number of researchers who really understand the interplay between trade and gender. I therefore wish similar projects be extended to other parts of the world to sensitize developing countries on gender issues."