Amina J. Mohammed, Deputy Secretary-General of the United Nations, launched a unique policy compendium in Geneva today that aims to assist governments of the world’s most disadvantaged countries in boosting prosperity and meeting the Sustainable Development Goals.

The compendium – Achieving the Sustainable Development Goals in the Least Developed Countries (LDCs) – synthesizes nearly 15 years of UNCTAD research and policy options in a single resource that links potential development objectives with concrete steps and practical actions to achieve specific targets of the global goals.

"UNCTAD is, as it always has been, in the forefront of crafting vital policy options needed for the structural transformation of the world’s poorest and most fragile economies,” said Ms. Mohammed, who was instrumental in bringing about the 2030 Agenda for Sustainable Development, of which the 17 Sustainable Development Goals are at the core. 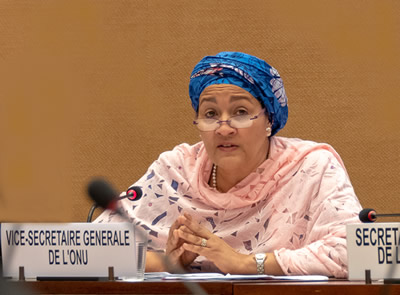 “Without concrete proposals to bring about this transformation, the development prospects of millions of people remain in jeopardy.”

“I welcome this UNCTAD compendium as a powerful resource for countries working to achieve the targets of the Sustainable Development Goals, and for their development partners worldwide.”

There are currently 47 LDCs, which are home to just over 1 billion people, or about 13% of the world’s population – but they account for only 1.2% of global GDP.

While LDCs have many challenges in common, UNCTAD underlines that there is no single recipe for success, with government needing to take a pragmatic approach that involves a combination of policy measures tailored to national conditions.

The compendium offers a wide range of ways for policymakers and international development partners to fashion targeted solutions for the social, economic and environmental challenges facing LDCs.

"UNCTAD has always been ahead of the curve, producing cutting-edge policy options with a special focus on the LDCs, based on sound analytical research. This compendium, rich in options for action and trendsetting in its approach to LDC challenges, is such an example of frontier research," UNCTAD Secretary-General Mukhisa Kituyi said.

Almost half of the population of LDCs still lives in extreme poverty. At the same time, LDCs have the world’s fastest population growth rate. The basic causes of persistent and widespread poverty in LDCs are low productivity, and high levels of unemployment and underemployment.

After 2014, GDP growth in LDCs fell to an average of less than 5%. That was below the average annual growth target of at least 7% set by intergovernmental processes such as the Istanbul Programme of Action for the Least Developed Countries for the Decade 2011-2020 and the 2030 Agenda for Sustainable Development.

The implementation of most policy options recommended in the compendium points toward the need for additional financial efforts on the part of LDCs, as well as additional support from LDC development partners and the international community (as specified in Sustainable Development Goal 17 on “partnerships for the goals”).

Because efforts to achieve the goals will eventually lead a growing number of countries to improve beyond the thresholds established for remaining in the LDC category, these countries should develop productive capacities in such a way that enables them to achieve “graduation with momentum”.

This means prioritizing measures that transform the structure of the economy by shifting production to higher-value-added products and sectors, upgrading technology, implementing diversification and raising productivity.

Since several targets under the Sustainable Development Goals refer to this process of “structural transformation”, industrialization, technological upgrading, economic diversification and productivity growth, policy choices should reflect a production- and employment-oriented approach to reducing poverty and achieving the social and human development-related goals like improved healthcare and education.