The trade community has a responsibility to make the trade in fisheries more inclusive and sustainable, including by ending pointless and harmful fishing subsidies, a top UNCTAD official said on Wednesday at a meeting of the World Trade Organization (WTO) in Geneva.

With exports of fish and seafood products growing tenfold over a decade to reach a record value of $146 billion in 2014, fish has become one of the world's most traded commodities. It is also essential to the development of many coastal developing countries and small island developing states (SIDS).

While some 90 percent of the world's marine fish stocks are now fully exploited, overexploited or depleted, governments still pay out an estimated $35 billion on fisheries subsidies, of which $20 billion contribute directly to overfishing.

"Subsidies to support the extraction of an already depleted resource make no economic, environmental, or social sense," Joakim Reiter, UNCTAD Deputy Secretary-General, said. "We are running a senseless race to the bottom where very soon, we will all be the losers."

"We the trade community have a responsibility to make trade in fisheries more inclusive, more sustainable," he said, outlining three actions to do so - ending fishing subsidies, supporting effective fisheries management, and the minimization of tariff and non-tariff measures.

In July, UNCTAD, FAO and UNEP joined forces to propose a roadmap to ending subsidies, a statement which was supported by more than 90 member States, four international and regional organizations and more than 10 global NGOs. 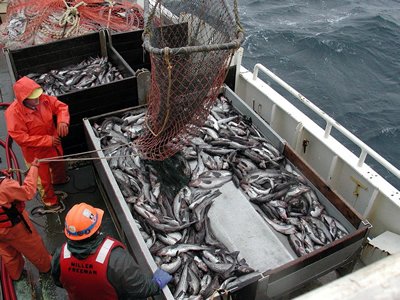 Reducing harmful fisheries subsidies could result in estimated economic gains of as much as $72 billion per year worldwide. This money should be spent instead on a Blue Development Fund to help SIDS and least developed countries (LDCS) to support bluer economies and more effective fisheries management, Mr. Reiter said.

Research is needed to better understand how some other trade measures can contribute to overfishing, Mr. Reiter said, noting that the nationality of an individual boat, not the origin of the fish, determines the trade policies applied.

"A Liberian fish is miraculously considered, say, European, if fished by a Spanish boat outside the coast of Monrovia," he said. "This situation distorts incentives in an important way."