Globalization backlash is clear but leaders say cooperation is key

The international political climate may be turning against globalization and threatening economic growth, but there is still a chance to channel money into sectors that can boost prosperity in poor countries, political and corporate leaders said at a Global Leaders Investment Summit during the World Investment Forum in Geneva, Switzerland, on 23 October.

The summit convened heads of state, government and giant corporations to share their vision of the future of multilateralism and how to ensure that a backlash against globalization does not derail the Sustainable Development Goals.

UNCTAD Secretary-General Mukhisa Kituyi said the political divide between the winners and losers of globalization could imperil not only global economic growth but efforts to manage climate change, migration and security.

“The stakes are high,” he said, explaining that, while investment flows had been stagnant for a decade, flows were acutely needed in sectors that boost development. Dr. Kituyi said policy responses were needed to unlock money that was trapped in the system but not channelled toward investments that brought the most benefit to the most people. 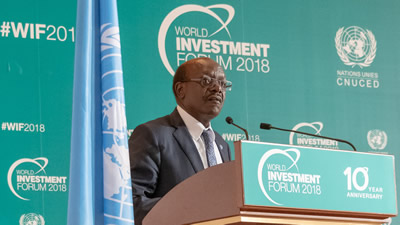 Abdul Hamid, President of the People’s Republic of Bangladesh, said globalization was not a recent phenomenon, but its “discontents” were. Technological change had boosted industrial and economic activity, but the dividends had not been spread equitably, he said.

Investment tended to sail into safe harbours but not necessarily to where it was most needed: policies needed to be adjusted to ameliorate this, and new ideas injected into the design of the global investment architecture, including for Least Developed Countries like Bangladesh.

“We must act today for a better a tomorrow!” President Hamid said.

Khaltmaagiin Battulga, President of Mongolia, said that despite the adoption of the Sustainable Development Goals in 2015, political and economic developments since were pushing them “off the edge of a cliff” unless urgent action was taken.

For landlocked developing states like Mongolia, foreign direct investment was a vital ingredient in its national development plan, and it had been increasing in recent years. More was needed, however, in sectors like agriculture, renewable energy and tourism, he said.

“Today we find ourselves at the crossroads in the future of humankind. Are we going forward or backwards?” said President Battulga, noting that the World Investment Forum was just the venue to answer such questions.

Milo Ðukanovic, President of Montenegro, said the market economy did not divide countries into large or small but into successful and unsuccessful, and it was a nation’s commitment to upholding the rules that determined this distinction. In this respect, Montenegro was a team player in the multilateral system and committed to building a progressive and transparent investment climate based on clear rules. This approach was bearing fruit, with $5.5 billion invested in South East Europe, including Montenegro, in 2017.

Novartis’ chief executive officer, Vasant Narasimhan, said the goal of the pharmaceutical giant was to “reimagine medicine” and that it made significant investments all around the world in order to do this.

Novartis was committed to creating “innovation ecosystems” and “investment virtuous cycles” in developing countries, he said. In Hyderabad, India, for example, it employed more than 5,000 people working in drug development and administration – thanks to a commitment from the local mayor.

“An integrated world is better than a disintegrated world,” while it was clear not everyone had benefitted, the project of free trade and globalization “was not done yet”, he said.

The private sector sought the “maximum output in the most efficient way” and this energy could be put to the common good if the public sector created “an enabling environment” that was “stable over time”.

Nestle had 450 factories in almost 100 countries and was making billion-dollar investments all over the developing world, with a commitment to creating shared value, he underscored.

Hage Geingob, President of the Republic of Namibia, echoed the concerns of his fellow leaders but made a special appeal on behalf of African countries, particularly concerning investment in infrastructure. Inclusivity spelt peace and prosperity, and the reverse was true, he said, leading to the inexorable conclusion that multilateralism, midwifed by the United Nations, was the only course his country would pursue.

The Prime Minister of the Kingdom of Cambodia, Samdech Akka Moha Sena Padei Techo Hun Sen, said his country was remained open, as it had for two decades, for inward investment in strategic sectors. His government planned to improve hard and soft infrastructure, enhance trading terms and train up its people to attract further investments, he said. He called on development partners to help Least Developed Countries like Cambodia to do their utmost in promoting sustainable development through investment.

Kocho Angjushev, Deputy Prime Minister of the Former Yugoslav Republic of Macedonia, meanwhile said that the rule of law and stability were paramount if a small nation like his was to attract enough investment. This was achieved by joining regional partners in security and political structures, on the one hand, he said and reforming domestic legal and regulatory regimes on the other. His government was committed to improving trade and infrastructure links with Europe and the world, he added.

The World Federation of Exchanges’ chief executive officer, Nandini Sukumar, said that her members – stock, commodities and derivatives exchanges – was home to 45,000 companies which were participants in the “real economy”. High on the agenda for international investors were regulatory coherence across borders, now under threat from nationalism, cybersecurity and systemic risk.

Roland Chalons-Browne, Siemens Financial Services chief executive officer – “the man with the money” according to moderator Nisha Pillai – said that tit-for-tat tariff tensions between China and the United States were not helping the investment climate. He said investing in developing countries was critical not least to create opportunities for people who might otherwise migrate to find better conditions elsewhere.

Siemens Financial Services was an institutional investor in many large infrastructure projects, such as a power generation drive in Egypt, that were dynamic job creators, Mr. Chalons-Browne said. He said that liquidity in the market was often held by funds that were risk averse and were not necessarily interested in the very long-term investment commitment that infrastructure often required.

The Global Leaders Investment Summit, which was livestreamed by UNCTAD on Facebook and broadcast on United Nations Web TV, was set to continue with a second session on industrialization on 24 October.