Technology is a job creator for development, say innovators

Speakers at a meeting of 'gamechangers' at the World Investment Forum addressed the shifting ground of the world economy but agreed that technology was more saviour than saboteur.

Channelling investment into economic activities to propel countries to achieve the Sustainable Development Goals requires new ideas for concrete solutions, while technology must not be feared, speakers said at a meeting on the first day of UNCTAD’s World Investment Forum on 22 October.

The debate kicked off with a look at the business case for investing in green and clean technology as one part of the sustainable development scenario. 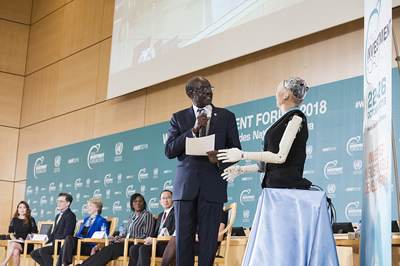 “Companies have clearly seen the risks and opportunities of green technologies,” Barbara Kux, a former member of the managing board of industrial conglomerate Siemens, said. “My experience with Phillips, and then Siemens, was to position green technology as a business opportunity.”

Finding ways to boost sustainable businesses in developing countries was another plank of development, speakers said, with the spotlight turning to e-commerce opportunities.

Juliet Anammah, chief executive officer of e-commerce giant Jumia Nigeria, said building trust among consumers and bringing down the cost of entry to technological solutions was vital in African markets.

Mr. Hanson allayed fears that robots will replace people and said that automation spurs economies and creates more jobs than it destroys. But there may well be a displacement effect, he said, especially for young people.

Beyond job creation, Alexandra ‘Santu’ Boëtius, co-founder of Impact Hub Geneva and head of Accelerate 2030, said young people hold the key to the future and their contribution to resolving the Sustainable Development Goals was critical.

Ms. Anammah said e-commerce could be a potent driver of prosperity in developing countries because it spurs entire “eco-systems” of interrelated steps forward in laws, logistics and infrastructure. Mr. Kawada agreed that technology was a job creator, mentioning examples of technological change in the past such as the replacement of horses by automobiles.

The panellists all agreed that the full participation of women in the global workforce including in creating and running new businesses would be the single most powerful “gamechanger” in the attainment of the Sustainable Development Goals and human prosperity and progress in general.

Sophia, a well-known humanoid robot named the world’s first United Nations Innovation Champion by the United Nations Development Programme, also participated in the summit. UNCTAD Secretary-General Mukhisa Kituyi held a mock interview with it at the start of the session.