A good overview of the accountability framework can also be found in annex 1 of the Secretary General's report "Towards an accountability system in the United Nations Secretariat" (A/64/640).

The accountability system of UNCTAD has seven main components: 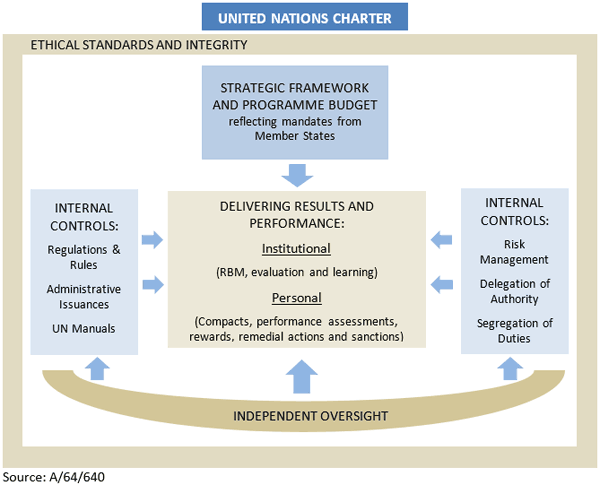 The basis of the UNCTAD accountability system is the United Nations Charter. According to the Charter, Member States are responsible for giving mandates (directives, priorities and targets) to the secretariat through the resolutions and decisions. The UNCTAD Secretary-General is responsible for implementing these mandates and reporting on outcomes and resources used.

In discharging responsibilities, the UNCTAD Secretary-General reflects these mandates in the programme and planning documents of the organization (the strategic framework and the programme budget). Programme managers and individual staff members — down the chain of responsibility —prepare their respective workplans with the purpose of achieving the results established therein.

2. The strategic framework and the programme budget

At the core of the accountability system is the UNCTAD biennial strategic framework [A/69/6 (Prog. 10)] and the programme budget [A/70/6 (Sect. 12)]. These documents represent the agreement with Member States on the results to be achieved (barring exogenous impacts) in a given cycle with the resources allocated by Member States. The strategic framework contains the overall orientation of UNCTAD and for each of the five subprogrammes, their objective, expected accomplishments (medium to long term), indicators of achievement and strategy for achieving results. The programme budget adds the outputs that deliver the expected accomplishments and the resources (post and non-post; regular and extra-budgetary) allocated by Member States to deliver the outputs. For each indicator of achievement, UNCTAD provides a baseline and target value.

Preparations for the UNCTAD strategic framework and programme budget start three years before the start of the biennium. The documents are reviewed in Geneva by the UNCTAD Working Party on the Strategic Framework and the Programme Budget and endorsed by the Trade and Development Board. They then go to the Committee for Programme Coordination (CPC) in New York before final review and approval by the Fifth Committee of the General Assembly.

Programme managers are accountable for the delivery of outputs and results contained in the strategic framework and programme budget. They are also responsible for fairly and accurately reporting on this, including through the web-based UN Secretariat platform IMDIS. The information reported is consolidated by the UN Department of Management and provided to Committee for Programme and Coordination through the biennial Programme Performance Report (2014-2015 report) as per the Regulations and Rules Governing Programme Planning, the Programme Aspects of the Budget, the Monitoring of Implementation and the Methods of Evaluation (ST/SGB/2016/6).

Results-based management (RBM) In 2006, the General Assembly mandated the United Nations Secretariat to implement RBM (A/RES/60/257). RBM is an overall approach to managing projects and programmes that goes beyond the achievement of outputs (publications, training workshops, intergovernmental meetings, etc.) to focus on their results (did we achieve what was intended with these outputs, what was the impact, how can we adapt or change to have greater impact, and so on).

It supports better performance and greater accountability by applying a clear logic: plan, manage and measure your intervention with a focus on the results you want to achieve. For UNCTAD, this means:

The benchmarks and methodologies for implementing RBM have evolved over the last decade.

While key policies and standards on which to build a more results-oriented Secretariat already exist, the United Nations Secretary General has acknowledged that the availability of support, consistent guidance and procedures, tools and training needs to be increased (A/64/640, p.31).

For technical cooperation activities, the UNCTAD Deputy Secretary General launched on 1 July 2016 the Technical cooperation results framework (PDF) and a set of 'minimum requirements for RBM' (PDF). These are basic steps to be taken to ensure a focus on results throughout the project cycle. For example,

By the end of 2016, UNCTAD is aiming to also launch initiatives to improve RBM for its research and analysis work, and support to intergovernmental meetings.

The UNEG norms seek to facilitate system-wide collaboration on evaluation by ensuring that evaluation entities within the UN follow agreed basic principles. They provide a reference for strengthening, professionalizing and improving the quality of evaluation in all entities of the United Nations system. The UNEG standards build upon the Norms for evaluation for the UN system and are drawn from best practice of UNEG members.

The main types of evaluations conducted by UNCTAD are:

The annual report of EMU, 'Evaluation of UNCTAD activities: Overview' (2020, PDF), consolidates the main evaluation findings and lessons learned and is presented to the UNCTAD Working Party on the Strategic Framework and the Programme Budget.

In achieving our objectives, UNCTAD staff members respect the regulations, rules and policies and follow the processes and procedures (i.e. the set of internal systems and controls) that guarantee the correct functioning of the organization.

These systems and controls provide reasonable assurance regarding operational effectiveness, adequate resource utilization, reliable financial reporting and compliance with relevant regulations, rules and policies. They include:

UNCTAD also has a system of segregation of duties to strengthen internal controls and reduce the risk of errors and irregularities. Under this system, no single individual has control over all phases of a decision or transaction that involves organizational resources. This reduces the possibility that a single individual can breach the regulations, rules or procedures causing financial loss to the organization.

The core values and principles governing staff conduct and behaviour (ST/SGB/2002/13) are contained in the Charter of the United Nations, the standards of conduct for the international civil service, and the Staff Regulations and Rules. In addition, the Code of Ethics (A/64/316, annex) outlines the fundamental values and principles applicable to the discharge of official UNCTAD duties and responsibilities.

Additional information can be found on the Ethics Office website.

The Secretariat Ethics Office develops standards, training and provides confidential advice and guidance to staff on ethical issues such as conflicts of interest. The Office also oversees the ethics helpline, has responsibilities related to the protection of staff against retaliation for reporting misconduct or cooperating with duly authorized investigations, and administers the United Nations financial disclosure programme.

Independent oversight of UNCTAD is carried out by four main bodies: the Office of Internal Oversight Services, the Joint Inspection Unit, the Board of Auditors and the Independent Audit Advisory Committee. A description of these four bodies follows.

The UN Secretariat Office of Internal Oversight Services (OIOS)
The mandate of OIOS is to promote good governance and accountability in the Organization by providing independent and objective oversight. It covers 38 UN Secretariat departments and programmes, as well as peacekeeping operations and special political missions. It is comprised of 1) internal audit, 2) inspection and evaluation, and 3) investigations. Internal audit and evaluation have a risk-based workplan that ensures cyclical coverage of UNCTAD. The Office looks at a range of areas e.g. internal controls, strategic planning, risk-management and programme performance. Audits, inspections and evaluations covering UNCTAD are either programme-based (e.g. Audit of UNCTAD projects on strengthening institution and capacity building in the area of competition and consumer protection) or theme-based (e.g. Evaluation of gender mainstreaming in the UN Secretariat). OIOS reports are public and reviewed by various UN governing bodies, including subsidiary bodies of the General Assembly and Economic and Social Council (such as the Committee for Programme and Coordination) and the Advisory Committee on Administrative and Budgetary Questions (ACABQ).

The UN Joint Inspection Unit (JIU)
Coverage of the JIU extends beyond the UN Secretariat to UN Funds, Programs and Specialized agencies. The JIU is the only independent UN oversight body mandated to conduct evaluations, inspections and investigations across the UN system. It reports to the General Assembly and to the 28 legislative organs of the specialized agencies and other international organizations within the United Nations system that have accepted its Statute (which includes UNCTAD). It is comprised of 11 Inspectors appointed by the General Assembly for a maximum of 10 years. The Unit has a strong focus on management and administration issues, but also reviews other system-wide issues of importance to the UN. Reports of the JIU can cover single organizations, multiple organizations or the UN system as a whole. They are addressed to the respective governing bodies of the organizations or to the Executive Heads. JIU reports often provide comparisons and good practices across the UN system.

The Board of Auditors (BoA)
The BoA is the external auditor of the United Nations, mandated to certify the financial accounts of the UN Secretariat and the Funds and Programmes, and report its findings and recommendations to the General Assembly. It is comprised of the heads of the Supreme Audit Institutions from three Member States, with a non-consecutive term of six years each. BoA recommendations are aimed at strengthening accountability for the use of public resources and improving the delivery of international public services. It reports its findings and recommendations to the General Assembly through the Advisory Committee on Administrative and Budgetary Questions.

The UN Independent Audit Advisory Committee (IAAC)
The IAAC serves in an expert advisory rather than operational capacity and assists the General Assembly in fulfilling its oversight responsibilities. It comprises five members (with a mix of UN, audit, private sector and geographic backgrounds) appointed by the General Assembly, for up to six years, to advise the latter on the scope, results and effectiveness of audit and other oversight functions; and on measures to ensure the compliance of management with audit and other oversight recommendations.