Leaders must 'walk the talk' at World Investment Forum

Influential global investment actors gather in Geneva from 22-26 October and during a crucial moment for the development aspirations of the international community.

UNCTAD’s biennial World Investment Forum was formally opened by Swiss president Alain Berset in the company of a host of heads of state and government, United Nations officials, private sector leaders and investment stakeholders in the Palais des Nations, Geneva, Switzerland on 22 October.

More than 6,000 participants from 160 countries gathered to address significant new investment-for-development initiatives and issues until 26 October.

Opening the conference, UNCTAD Secretary-General Mukhisa Kituyi looked back at patchy progress since the adoption in 2015 of the 2030 Agenda for Sustainable Development, the Paris Climate Change Agreement and the Addis Ababa Action Agenda on financing sustainable development.

Over the past three years since the triple promise made in New York, Paris, and Addis, he said, the international community had tended to talk to itself about the missing millions needed to make the Sustainable Development Goals a reality. 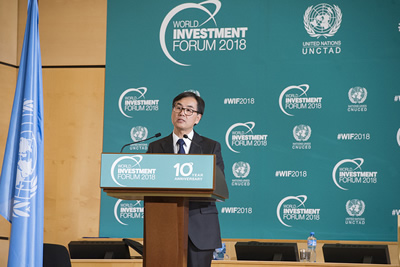 James Zhan, Master of Ceremonies at the opening of the WIF 2018

“But I am humbled today to see entrepreneurs, businesspeople and visionaries here to walk the talk,” he said.

President Berset said that Switzerland was proud to be a key player in mobilizing finance for sustainable development.

“The need for greater cooperation to face our common challenges is greater than ever, but it is a paradox that this is the time multilateralism is weakening,” he said.

“However, international investment is crucial for developing countries, so it is important to support a transparent and non-discriminatory investment climate,” Mr. Berset said. “The World Investment Forum is critical in bringing forward innovative solutions and stakeholders who otherwise might not meet.”

María Fernanda Espinosa Garcés, president of the 73rd session of the United Nations General Assembly, underscored the importance of the private sector in achieving the Sustainable Development Goals, emphasized the empowered role of women and young people in building peaceful and prosperous societies, and made the case for investing in environmental protection and climate change mitigation.

“The private sector has a moral responsibility,” to do this, she said.

In a video message, United Nations Deputy Secretary-General Amina Mohammed said that the public sector had a role in creating the investment climate and “unlock meaningful investment flows” into sustainable development sectors.

Michael Møller, Director-General, United Nations Office at Geneva, welcomed the World Investment Forum back to Geneva and warned of a “perfect storm of dichotomies” facing the international community.

But the Sustainable Development Goals were a “roadmap” that gave to directions to investors about where to invest capital for development impact, he said.

“The sustainability train has left the station. Get on board or get left behind,” Mr. Møller said.

Inter-Parliamentary Union President Gabriela Cuevas Barron said on behalf of the world’s lawmakers that it was a measure of the importance of national governments in bringing the Sustainable Development Goals to fruition that she had been invited to address the World Investment Forum.

Partnerships between governments and the private sector, she said, were among the most critical to ensure the success of the 2030 Agenda.

Nandini Sukumar, chief executive officer of the World Federation of Exchanges, said on behalf of the nearly 45,000 companies listed on the stock exchanges her body represents that there was a growing consensus on sustainable economic growth.

Guests of honour at the grand opening were:

Participants were serenaded by traditional Swiss alphorn players at the start of the event, which was also livestreamed by UNCTAD on Facebook and broadcast on United Nations Web TV.