Heads of state, private sector and international leaders are meeting at the World Investment Forum in Geneva to close the $2.5 trillion gap needed to achieve the Sustainable Development Goals.

More than 5,000 participants from 160 countries will meet in Geneva to thrash out major new investment-for-development initiatives at UNCTAD’s World Investment Forum 2018 in the Palais des Nations, Geneva, Switzerland from 22–26 October.

The high-level conference comes amid mounting disquiet about declining investment flows and their impact on efforts to meet the ambition of the 2030 Agenda for Sustainable Development, adopted by the international community three years ago.

“Global flows of foreign direct investment fell by 23% in 2017,” United Nations Secretary-General Antonio Guterres said. “Cross-border investment in developed and transition economies dropped sharply, while growth was near zero in developing economies. With only a very modest recovery predicted for 2018, this negative trend is a long-term concern for policymakers worldwide, especially for developing countries.”

Private sector investment in developing countries totalling $3.9 trillion a year is needed to generate economic activity to meet the Sustainable Development Goals – the core of the 2030 Agenda – according to UNCTAD research. Current levels leave an investment gap of some $2.5 trillion. 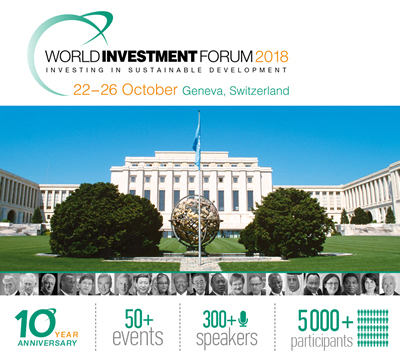 Marking its 10th anniversary, the biennial World Investment Forum remains the premier venue to forge partnerships between investment and development stakeholders to close this gap.

A unique gathering of leaders from the global investment and development communities, the forum provides an opportunity to hold an open dialogue, brainstorm solution-oriented initiatives and foster global alliances to advance prosperity for all. This year’s event comprises some 60 events, including three summits, five ministerial round tables, private-sector led sessions and several awards ceremonies.

Besides giving participants a chance to spotlight priorities for attracting and channelling investment that will drive sustainable development, the forum sessions will also focus on transformative actions and innovative financing modes for development, such as blockchain, sustainability bonds and blended finance.

Speakers from business and special guests include more than 30 top executives of multinationals, among them Aviva, De Beers, Coca Cola, ContourGlobal, Jumia, Lavazza, PwC, Siemens Financial Services, and UBS, and the heads of the Bombay, Johannesburg, Luxembourg, Nasdaq Nordic, SIX and Shenzen stock exchanges, as well as the leaders of sovereign wealth and pension funds.

Fourteen heads of state and government have confirmed they will attend, including those from Armenia, Bangladesh, Botswana, Cambodia, the Central African Republic, Kenya, Lesotho, the Former Yugoslav Republic of Macedonia, Malawi, Mongolia, Montenegro, Namibia, Sierra Leone and Switzerland.

They will be joined by more than fifty ministers from developed and developing countries and 21 heads of international organizations.

The topicality of the forum for the international investment and development communities is reflected in the number and diversity of organizations that have partnered with UNCTAD for the event.

These partnerships have generated exciting new content for this year’s participants, including an in-depth look at the relationship between sport and development, co-hosted with the International Olympic Committee and, on the annual United Nations Day, 24 October, a session on the role of investment in peace and security.

Five independent tracks will run in parallel with the main forum, with a special programme for parliamentarians, a multidisciplinary academic conference, an investment village, the 35th anniversary session of the Intergovernmental Working Group of Experts on International Standards of Accounting and Reporting (ISAR), and the 2018 UNCTAD Youth Forum, taking youth entrepreneurship as its theme.