Women’s rights have not fallen from the sky. They have been earned. International Women’s Day, celebrated annually on 8 of March, acts as a reminder that we all stand on the shoulders of those women and men who fought, struggled, protested and negotiated for these rights and continue to do so.

These negotiations are ongoing, and the United Nations is an important platform for such discussions. Yet, at many negotiation tables women are still underrepresented.

Women representation in high positions has been increasing, but at a slow pace and despite the gender parity goals we aspire to in the Sustainable Development Goals.

Why is this change so painfully slow?

The truth is that for most women career progression remains slower than for men. 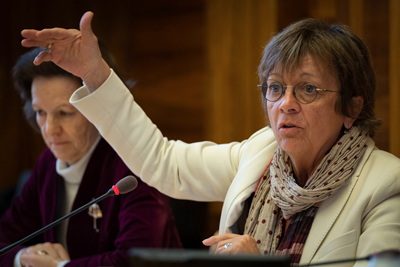 The lack of enough women in diplomacy, and more generally in economics, politics, and the sciences, is associated with underlying gender norms. In societies marked by more traditional gender role attitudes, fewer women will be in the workforce and rise to positions of power because the talent pool of women to draw on is often smaller.

What’s happening at the table

There is hope however, and several women ambassadors are playing an active role at the negotiating table at the United Nations’ European headquarters in Geneva.

At a recent UNCTAD event for International Women’s Day 2020, these women negotiators shared their views on why the status quo remains and what can be done to shift it.

Ms. Silvia Alfaro Espinosa, the Peruvian ambassador, commented that in many parts of the world, girls still grow up thinking that they are less valuable than boys. These attitudes are often tacit. The newly released UNDP Gender Social Norms Index shows that nearly 90% of men and women hold some level of bias against women. Yet, in many countries, attitudes and the gender balance in offices are changing, especially where women candidates are being actively sought out.

There are costs in the journey to gender parity, and though necessary, can hurt in the short-term. Austrian ambassador, Ms. Elisabeth Tichy-Fisslberger, emphasized that more equality for one group means you take something away from another. She made an important point that while men tend to comment on their lost opportunities now, they did not comment on the composition of the negotiation table when it was made up only of men.

Getting more women at the table is not only an ethical imperative but a rational economic choice. Having the talents of all genders allows us to draw from more diverse experiences which fosters innovation and creativity. These are important aspects for tabling outcomes and reaching agreements.

Moreover, women typically bring to the table certain characteristics which are ingredients for consensus building. According to research[i], women are more emphatic, agreeable and sociable. They also tend to think more about society’s vulnerable and disadvantaged.

Women are also more future orientated, possibly because we’ve not been part of past debates and conflicts nor are we nostalgic for a past that was not such a great place for women. This future orientation is essential for peace negotiations.

How can we trigger needed change?

Many countries have adopted gender parity objectives. But to bring real change, this is not enough. A favorable institutional framework is needed.

The case of the Philippines is inspiring. Philippines ambassador, Ms. Maria Teresa Almojuela pointed to the fact that her government has embraced feminist policy. It allocates a specific budget for gender promotion, and 95% of private sector businesses have programmes to reduce barriers for women.

Zambia has also taken steps to heighten the importance to gender by establishing a Ministry of Gender. Its former Director, Ms. Martha Mwitumwa, is now an ambassador in Geneva. While highlighting Zambia's gender parity wins, she said there's still a long way to go to get women to be signatories of deals: “Historically women do not aspire to diplomatic office. This must change through deliberate policy.”

Policy is helpful. But confidence is critical. Women themselves must believe that they can make it to the table. Mentors play a critical role guiding and supporting women that aspire to these positions. A social network, and in particular a supportive family, play an important role, as emphasized Ms. Tichy-Fisslberger.

Attitude change happens slowly, but it does happen. Awareness of the contribution of women to the economy and society is a critical factor. This calls for valuing not only the contributions measured in economic terms but also the invisible work that is mostly performed by women.

In the end, we need a balanced negotiation table. We also need to ensure that negotiation actually happens at the table – not in cigar lounges, bars, backrooms, or someone’s house, a point highlighted by Ms. Pamela Coke-Hamilton, UNCTAD’s trade director and a former trade negotiator.

Until this is achieved, the discussion must go on. We will not wait until 8 March 2021 to start more concrete work towards what Margot Wallström calls a “feminist diplomacy”.