Webinar on the launch of the UNCTAD publication: “Implications of the African Continental Free Trade Area for BioTrade, Challenges and Opportunities” 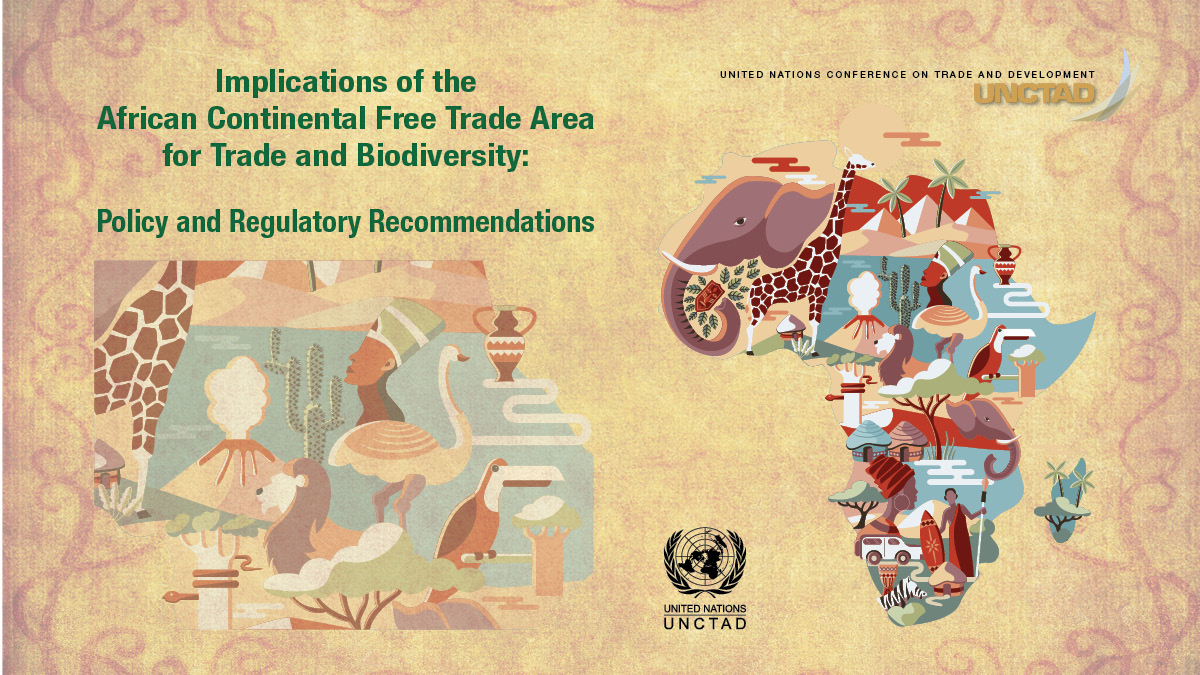 The African Continental Free Trade Area (AfCFTA) Agreement came into force in 2019 and has been signed by 54 out of 55 countries and ratified by 37 countries in the African region to date. Its establishment culminates the creation of an African economic community in line with the Abuja Treaty of 1991 and in harmony with Agenda 2063 – both of which envisage a continent that prioritises, amongst other things,  inclusive social and economic development through continental and regional economic integration.

As the largest global free trade area in terms of the number of participating countries since the formation of the World Trade Organization (WTO), AfCFTA indeed has the greatest potential to drive Africa’s aim to attain inclusive and sustainable development in the next 50 years. With the key objective to  create a single pan-African market for [agricultural] goods and services coupled with free movement of business people and capital, the AfCFTA is envisaged to mainstream trade as a tool for industrial diversification and development.

This shift to a new policy and regulatory paradigm coincides with the significant urbanisation, population growth and economic development in Africa in the last decades. Such impressive development has had unsustainable and negative consequences on the environment though. The continent has seen progressive (and rapid)  decline of biodiversity, loss of species and habitats and ecosystem degradation exacerbated by human-induced factors and negative impacts of climate change and the COVID-19 pandemic. The link between social and economic development and natural capital in Africa has never been so explicit.

Yet, commitments negotiated so far under the landmark AFCTA barely mention the environment.

UNCTAD’s recently e-published study “Implications of the African Continental Free Trade Area for Trade and Biodiversity: Policy and Regulatory Recommendations  presents this current context as a potential missed opportunity to achieve sustainable development through trade integration in Africa. The study investigates the link between trade and biodiversity and the existing parties’ commitments under the AfCFTA as well as recommends ways of transforming AfCFTA into an enabler of sustainable trade in biodiversity, creator of a ‘green’ development pathway and a key driver of post-COVID

The webinar will focus on specific topics related to trade including tariffs and non-tariff measures (NTMs), intellectual property rights, investment, competition policy as well as analyses of treaty provisions from a trade in biodiversity/BioTrade perspective. Specifically, it aims to:

This 3-hour virtual webinar will be hosted by UNCTAD and ABS Capacity Development Initiative and will consist of two round table formats featuring the main authors, contributing authors/organizations, experts, and academics as speakers.

This online event is organized under the global BioTrade programme “Linking trade, biodiversity and sustainable development” with the financial support of the Swiss State Secretariat for Economic Affairs SECO. UNCTAD also gratefully acknowledges the contributions of the Deutsche Gesellschaft für Internationale Zusammenarbeit, GIZ, under the ABS Capacity Development Initiative / the ABS compliant Biotrade in Southern Africa Project (supported by Germany, the European Commission, Norway and Switzerland) and the BioInnovation Africa Project (supported by Germany).