Benchmarking is a powerful tool to make mining responsible

The initiator of the new Responsible Mining Index says he hopes it will fuel change by showcasing the best-in-class and spotlighting those that need to raise their game.

Dutch diplomat Prince Jaime de Bourbon de Parme is currently the Chair of the Advisory Board of the Responsible Mining Index, a brand-new ranking of 30 big companies in the global extractive sector.

Five years in the making, the index was conceived when Prince Jaime was serving at the Netherlands’ special envoy for natural resources.

The inaugural ranking was unveiled ahead of UNCTAD’s Global Commodities Forum in Geneva, where we sat down with him to find out more. 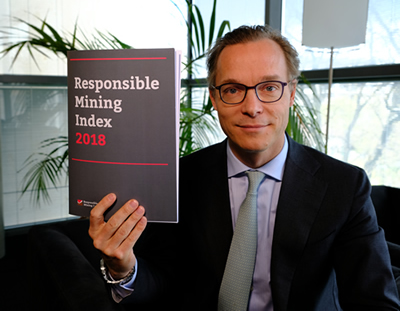 Q:   What’s behind the creation of the Responsible Mining Index?

A:   I was serving as the special envoy for natural resources for the Kingdom of the Netherlands. What a special envoy does is look at security of supply, in this case minerals and metals, for the Dutch and broader European market, mostly to see if we can source it responsibly.

But when we look at the mining industry that produces those minerals and metals, we don’t think of something precious. We often associate mining with human rights abuses, environmental degradation, tough labour conditions, etcetera.

We believe that minerals and metals mining should benefit the economies, improve the lives of people and respect the environments of producing countries, while also benefiting mining companies in a fair and viable way.

What we’ve tried to do with the Responsible Mining Index is to look at the 30 biggest mining companies working in sensitive areas in the world. These 30 companies represent 25% of all mining and operate in more than 700 sites in over 40 producing countries. The index wants to encourage continuous improvement in responsible mining across the industry by transparently assessing the policies and practices of these mining companies on a range of economic, environmental, social and governance issues. We not only look at what policies are in place, because many companies have very good policies, but what is the actual proof of implementation and impact of these policies.

Q:   Can you explain the steps towards the April 2018 roll-out of the Responsible Mining Index?

A:   As special envoy for natural resources, I first went to Congo to work with artisanal miners to set up a conflict-free supply chain of minerals in the war-affected areas in the east of that country. We managed to set up a traceable mineral chain there to make sure that no minerals trade would benefit warlords with income. This was the start of a peace economy instead of a war economy. If you can set up a transparent system there, then you can do that anywhere in the world. That went from one pilot mine that employed about 1,000 miners, to what is now more than 800 mine sites that employ over 70,000 people in eastern Congo.

I thought, “What's another place we can have an impact?” Instead of working with small artisanal mining cooperatives, why not work with the very big corporations, because they have a huge potential to improve the social and environmental impact. At the World Economic Forum, I went to a meeting of the mining companies. They were talking about responsible mining initiatives and someone suggested, “Shouldn't we start with an index?” Industry CEOs seriously considered it and concluded that it was a bit too soon. But it stuck in my mind.

Later I met someone who introduced me to the Access to Medicine Index. I spoke to the founder, a Dutchman called Wim Leereveld, and he showed me how one can build an independent and impactful index. So that started it. We then got money from the Ministry of Foreign Affairs of the Netherlands and Cordaid, a Dutch NGO, to do a feasibility study. The study indicated that making an index would be very difficult because it’s very complex, but that it was feasible, and it would have a big impact.

Next, we created an independent foundation and they started to build the index. The Dutch and Swiss governments are the main funders. No funds come from the mining industry, to avoid conflicts of interest. And five years later, after very thorough research and thoughtful work, Responsible Mining Index is a reality.

Q:   Are you hoping to create an aspiration to be on the index, and to be well-ranked on the index?

A:   The index aims to be very realistic. We build on existing international standards and look at the current leading practice. The sum of the very best practice creates the benchmark for the rest of the industry. There is always a company that is best-in-class in a specific area, then that's the example for the rest. The index shows that ambitious goals in responsible mining are achievable. There is a clear interest in the mining industry to improve their standards. They want to get recognition for what's going well. They can now also see where there is room for improvement.

Q:   Do you hope that comparative rankings will act as a form of peer pressure?

A:   What you see in the index is that each of the 30 companies does better in a different topic. This shows that they can learn a lot from each other. Even the lower-ranking companies might have one particular mine that is way outperforming the other ones on social or environmental impact. So even they have something to show to the rest of the industry. This is very good for peer-to-peer learning.

We see that those mining enterprises that have standardized social and environmental policies and evaluations for the whole company often rank high on the index. Implementing a standardized practice is an easy win. Companies can first learn what is best practice in their own mines, and then learn from their competitors.

Q:   How often will the index be updated?

A:   Every two years. This gives the industry the time to adapt its policy and show what it can do. The ones who score highest on the index are the ones who shared more information. If they rank lower on the index, that can mean either that they're lower-performing or that less information was shared that proved their positive impact on society. An easy win for companies to score better is to just provide the necessary information.

That's the whole thing: whatever gets measured, gets done. If the companies are actually measuring what they're doing, they can move to action. And if they are not willing or they can't provide us information, then there's a serious question as to whether they're actually having the impact that they're hoping to get.

Q:   Do you have any involvement with the United Nations in this?

A: I think the UN is very important. Most if not all the relevant standards developed by the UN are reflected in this index. One example is the UN Guiding Principles on Business and Human Rights.

Q:   You mentioned that you were inspired by the Access to Medicine Index. Do you see other sectors where the lessons of your indexing could be applied?

A:   Indexes are becoming a bit fashionable. Industries closer to consumers are often more concerned with how they are perceived and thus would be fast to react to an index. Though there is also a great need for indexes for industries further away from the limelight, such as mining. Think of a mine: it’s seven layers away from a consumer. There are seven different companies between a mine and a finished product that's been sold to consumers. The mines are often in faraway places, sometimes in countries where maybe governance or the press doesn't work well, so it doesn’t hit home. An index can bring such sectors into the spotlight.

I hope that indexes being developed in other sectors go through such rigorous thought as ours. A lesson we learned is that to have impact, it is often better not to strive to blame or shame. An index can be useful as a consultancy tool, in a sense, to promote continuous improvement within companies. This index will also create a fantastic platform to talk with local communities, governments, investors and all the other interested parties in mining on how the sector can advance on economic, environmental, social and governance issues.

Q:   How do you walk the line between collaborating with the industry – raising the risk of what in the environmental sector is dubbed “greenwashing” – and being critical?

A:   This is about being incredibly transparent, publishing everything, from the methodology to the information gathered. Everything is online and usable by third parties. The information can be verified and used by third parties. That’s quite critical. Also important is to keep setting achievable, but high standards. Not one company has reached the maximum of what can be done.

When we talk about mining, most people think, “So what does it have to do with me?” But if then you think how much metal and mineral you use in everyday life, and that you couldn't live without them, then you understand that this is something worthwhile thinking about. I hope that in the future you not only associate minerals and metals as something precious, but the industry as something precious as well.