Developing countries that depend on commodities ought to pursue diversification strategies to address the adverse effects of price volatility in international markets, said speakers at UNCTAD’s meeting of experts on commodities and development on 15 April at the UN’s European headquarters in Geneva, Switzerland.

Today 67% of developing countries (91 out of 135 countries) are dependent on commodities, a situation that has changed little in the last two decades, UNCTAD Deputy Secretary-General Isabelle Durant told attendees.

Least developed countries are even more dependent, as more than 80% of their export earnings come from commodities.

“Heavy dependence on commodities makes these countries vulnerable to shocks and price fluctuations,” Ms. Durant said, adding that a decline in commodity prices can have a negative impact on export and fiscal revenues and may slow down economic growth and development. 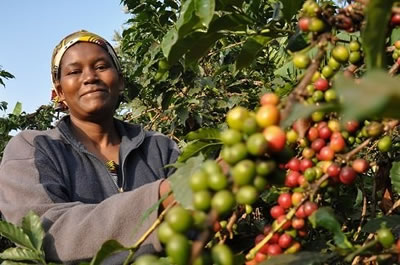 As in previous years, commodity prices in 2018 were volatile, but generally followed a downward trend, with variations between commodities, said UNCTAD’s commodities head, Janvier Nkurunziza.

Overall, agricultural products saw falling prices, a trend that began when the most recent commodity boom ended in 2011. Mineral prices, for their part, dropped after an upturn in 2016 and 2017 for ores such as gold, nickel and zinc.

The prices of crude oil and natural gas fuels were the exception in 2018. The price index for energy products increased, particularly from its low level in 2016.

As a result of the downward trend of most commodity prices, countries have been losing crucial import/export revenues.

“The continued fall in commodity prices since their peak in the early part of the decade has affected the ability of countries dependent on these commodities to ensure their socio-economic development,” Mr. Nkurunziza said.

Many commodity-dependent developing countries rely heavily on the production and export of a few commodities with minimal value addition and even fewer forward and backward linkages with other sectors of the economy.

The drop in export earnings has not only affected state budgets, but also the lives of farmers producing crops such as coffee and cocoa.

In the last five years, the prices per tonne of coffee and cocoa have fallen by 48% and 46% respectively, according to Laurent Pipitone, a director at advisory firm FarmBridge International.

This downward trend caused by production increases and trade uncertainties has impoverished many coffee and cocoa farmers, especially in countries such as Cote d’Ivoire and Ghana.

“A cup of coffee creates the image of conviviality and makes people look trendy and glamorous, while cocoa and chocolate products are associated with the celebration of joyful events, romance and pleasure. Behind the scene is the unglamorous reality of the lives of most coffee and cocoa farmers,” Mr. Pipitone said.

In the 1950s, recalled Mr. Pipitone, a Ghanaian song praised cocoa for its power to lift its farmers out of poverty. Today, price volatility has put paid to those dreams.

Equally hit by price volatility are minerals such as cobalt, a key component of lithium-ion batteries widely used in electric cars.

After years of relative calm in cobalt markets, prices per tonne surged by 129% by the end of 2017, driven by increased demand for lithium-ion batteries and other factors.

But the upward trajectory was reversed in the second quarter of 2018, when prices fell by 16%, largely due to excess supply.

The price per tonne of cobalt fell from $90,000 at the beginning of 2018 to $30,000 by the end of the year, a substantial loss in value, said Guillaume Albasini, an energy and mining analyst.

As a result, revenues of cobalt-exporting countries such as the Democratic Republic of the Congo have fallen precipitously, affecting their ability to deliver basic goods and services.

“Cobalt is a key component of lithium-ion batteries widely used in electric cars…electric cars are booming yet in Congo we have a crisis,” observed UNCTAD’s director of international trade and commodities, Pamela Coke-Hamilton.

The big picture: 2 out of 3 developing countries are commodity-dependent 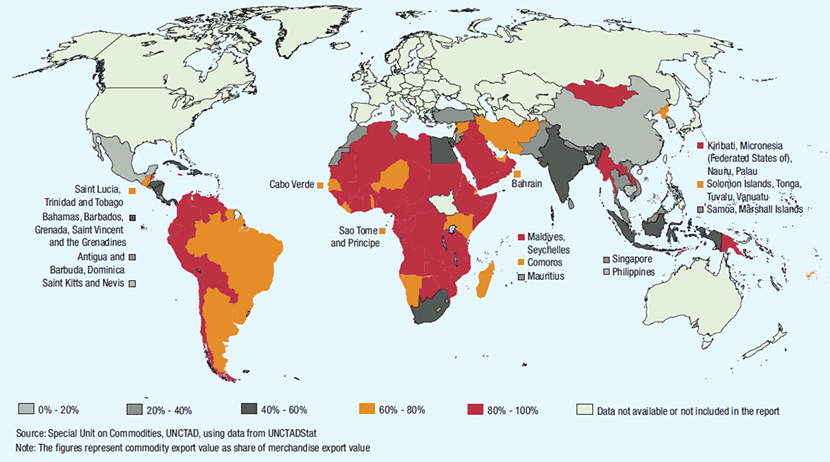 There are two main diversification strategies that can be used by commodity dependent developing countries. One approach is to diversify horizontally by exporting different types of commodities and other products. The other is to diversify vertically through value addition.

“Reducing dependence on commodities through vertical and horizontal diversification remains the surest way to avoid the vulnerability of producing countries to changes in commodity prices. Only diversification of exports and the economy can lead to sustainable development,” Ms. Durant said.

The eleventh edition of UNCTAD’s Multi-year Expert Meeting on Commodities and Development, takes place on 15 and 16 April, and brings together experts to discuss policy options for managing risk in the commodity sector of commodity-dependent developing countries.