High-street retailers in Western Europe held their breath in September 2016 when container ships bringing goods from Asia due to fill their shelves at the peak Christmas shopping season were suddenly left stuck in ports halfway. Some ships were even stranded at sea.

To avoid this fate, shipping companies have for many years increasingly merged or bought each other in a classic process of consolidation that is having profound effects on the efforts of developing countries to better engage with global trade. 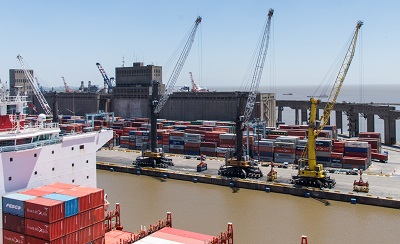 On the one hand, global trade benefits from low freight costs and improved shipping connectivity that result from economies of scale and technological advances, yet on the other hand the mergers among shipping lines and their investments in ever larger ships also pose serious challenges to smaller trading nations and their seaports.

The challenge for policymakers - the focus of a session at the Intergovernmental Group of Experts on Competition Law and Policy convened by UNCTAD on 13 July - is to ensure that the benefits of lower costs and improved connectivity will be passed on to the smaller shippers and ports, while also responding to concentrated markets so that players are discouraged from abusing dominant positions.

The challenge for competition authorities

For example, when shipping giant Maersk acquired competitor Hamburg Süd, the latter's services may switch from their previous terminal in Buenos Aires to the one operated by APM Terminals - which belongs to the same group as Maersk.

But there are several other phenomena shaping shipping in the 21st century that the national watchdogs must also monitor to ensure that trade continues to boost economic progress in developing countries.

Ports are under pressure to dredge, expand yards and invest in ever larger ship-to-shore container cranes, often without any additional cargo throughput. Trucking, train and barge operators will incur additional expenses as vessel sizes and thus peak demand go up.

Port authorities and local governments need to carefully consider if the additional dredging and investment in berth, yard and hinterland transport capacity that shipping lines demand is worthwhile.

Many countries impose restrictions on international operators transporting goods domestically. In container shipping, this leads to situations in which a ship may call at two ports within the same country but is not allowed to transport cargo between these two ports.

Countries find themselves in the scenario where ports in neighbouring countries become the hub ports for their own cabotage or feedering services.

Montevideo, Uruguay, for example, acts as a relay port for services that connect two ports in Argentina. Sri Lanka benefits from cabotage restrictions in India as ships call at the port of Colombo, and from there international feedering services connect to seaports in India.

In response, policymakers should analyse the potential of opening up selected shipping services to international service providers to ensure competitive markets.

Closer distances usually involve lower transport costs and thus fewer negative externalities. However, in view of the need to fill ever larger ships, and the desire to keep alternative options open for shippers, policymakers may also want to expand each port's hinterland.

The resulting competitive pressures will encourage port operators to maximize their efficiency and pass on those efficiency gains to their clients, shippers and shipping lines.

Ideally, such collaborative platforms should go beyond compliance issues, aiming instead at all necessary reforms to facilitate international trade and its transport. Transit should be facilitated in line with international standards and recommendations, including those of the United Nations, the World Customs Organization and the World Trade Organization.

Container shipping is a cornerstone of globalization. Thanks to the container shipping network, maritime transport connectivity has improved, and real freight costs have gone down. The operational efficiency gains achieved thanks to alliances have helped increase load factors and added further downward pressures on freight rates.

However, we have reached a situation where the reduced number of companies on some trade routes can result in oligopolistic market structures. This poses challenges to importers and exporters, who have less choice with whom to transport their goods. Larger ships and the combined bargaining power of lines in alliances also pose challenges to seaports which will have to invest ever more heavily in port infra- and superstructure.

National competition watchdogs will need to carefully monitor market developments and strengthen competition law enforcement against possible anticompetitive practices to ensure that limited competition does not lead to detrimental effects on costs, connectivity and economic growth in developing countries.

Jan Hoffmann will participate in a roundtable on challenges faced by developing countries in competition and regulation in the maritime transport sector at the Palais des Nations, Room XVII, on 13 July (10:00-13:00).