The coronavirus speeds up the transition to a digital economy while exposing the digital gap between countries and societies.

The global crisis brought on by the coronavirus pandemic has pushed us further into a digital world, and changes in behaviour are likely to have lasting effects when the economy starts to pick up. But not everyone is ready to embrace a more digitized existence.

A new analysis from UNCTAD maps the changing digital landscape since the last major global calamity, the 2008/09 financial crisis. It looks at how a digitally enabled world is working for some, but not all equally.

According to the analysis, the coronavirus crisis has accelerated the uptake of digital solutions, tools, and services, speeding up the global transition towards a digital economy.

However, it has also exposed the wide chasm between the connected and the unconnected, revealing just how far behind many are on digital uptake.

“Inequalities in digital readiness hamper the ability of large parts of the world to take advantage of technologies that help us cope with the coronavirus pandemic by staying at home,” said UNCTAD’s technology and logistics director, Shamika Sirimanne. 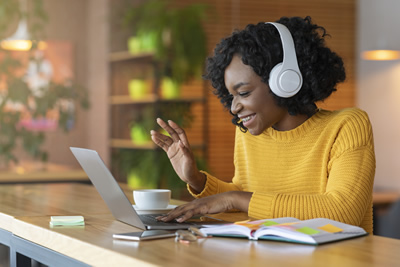 “This situation has significant development implications that cannot be ignored. We need to ensure that we do not leave those who are less digitally equipped even further behind in a post-coronavirus world.”

The power of digital revealed

The analysis provides snapshots of how technology is being used as a critical tool in maintaining business and life continuity.

Measures to contain the coronavirus pandemic have seen more businesses and governments move their operations and services online to limit physical interaction to contain the spread of COVID-19.

Digital platforms are also thriving as consumers seek entertainment, shopping opportunities and new ways of connecting during the crisis.

“There are incredible positives emerging that show the potential of a digitally transformed world,” notes Ms. Sirimanne.

Digitalization is allowing telemedicine, telework and online education to proliferate. It is also generating more data on the expansion of the virus and helping information exchanges for research.

According to Microsoft, the number of people using its software for online collaboration climbed nearly 40% in a week.

In China, the use of digital work applications from WeChat, Tencent and Ding took off at the end of January when lockdown measures started to take effect.

Use of selected remote work applications in China
1 January – 5 March 2020, number of users 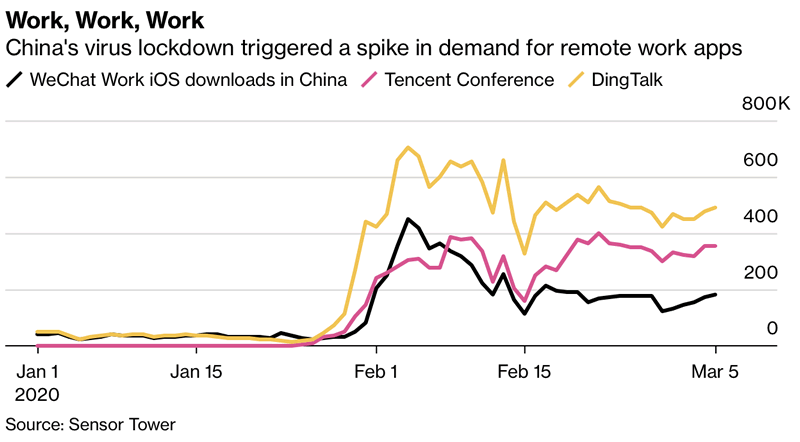 Other benefits include using artificial intelligence to help find a cure and a significant shift to e-commerce, benefitting small and big businesses alike.

However not all technology companies are profiting and there are some serious consequences of the rush to online platforms. These include mounting security and privacy concerns, according to UNCTAD.

The downside and the digital divide

The fast-paced shift towards digitalization is likely to strengthen the market positions of a few mega-digital platforms, the analysis finds.

This finding echoes the conclusions drawn in UNCTAD’s 2019 Digital Economy Report, which pointed out that the world’s top seven digital platforms already accounted for two-thirds of the value of digital platforms globally in 2017.

They have benefitted from network effects and from their ability to extract, control and analyse data, then transform it into digital intelligence that can be monetized.

“This situation will now be amplified as more people come or are forced online due to the coronavirus crisis,” said Torbjörn Fredriksson, UNCTAD’s digital economy head. “Those that do not have access are at risk of being left further behind as digital transformation accelerates, especially those in least developed countries.”

The least developed countries (LDCs) are the most vulnerable to the human and economic consequences of the pandemic, and they also lag farthest behind in digital readiness.

Only one in five people in LDCs use the Internet, and in most developing countries, well below 5% of the population currently buy goods or services online.

Lack of Internet access at home also limits connectivity, cramping, for example, the possibilities for students to be connected if schools are closed. “The education gap may also expand in developing countries, compounding inequalities,” said Sirimanne.

The coronavirus pandemic’s ability to show fractures can, hopefully, be turned into an opportunity, said Ms. Sirimanne. “More developing countries are exploring e-commerce and other digital solutions that can help build local resilience to future shocks,” she said.

The main policy takeaway from the analysis is that much more attention should be given to bridging existing and emerging digital divides to allow more countries to take advantage of digitalization.

New policies and regulations are needed to ensure a fair distribution of the gains from digital disruptions.

“If left unaddressed, the yawning gap between under-connected and hyper-digitalized countries will widen, thereby exacerbating existing inequalities,” she added.

“As with the coronavirus crisis and other development challenges, the world will need a coordinated multilateral response to deal with the challenge of digitalization.”