Ministerial roundtable meetings have discussed how to use the information society and scientific and technological advances to speed economic progress in developing countries.

The round tables featured on the opening day of the sixteenth session of the United Nations Commission on Science and Technology for Development (CSTD), which runs until 7 June.

The first panel focused on a review of progress made in implementation of the outcomes of the 2005 World Summit on the Information Society (WSIS). The second group debated the topic of "Harnessing science and technology to address development challenges". 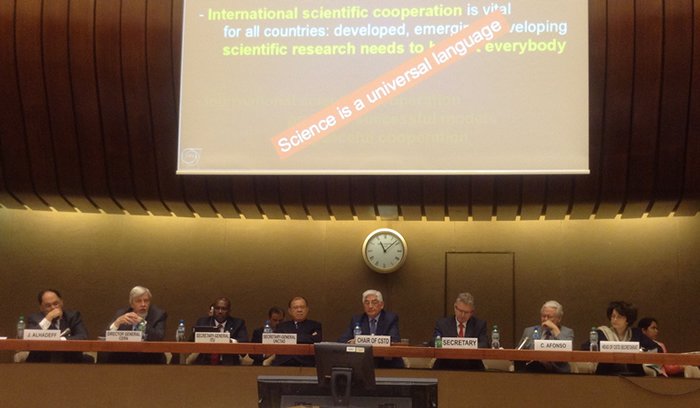 Also speaking were Joseph Alhadeff, Vice-Chairman of the International Chamber of Commerce's Business Action to Support the Information Society (ICC-BASIS), and Carlos Afonso, Executive Director of the NUPEF Institute of Brazil.

UNCTAD Secretary-General Supachai Panitchpakdi said that the Commission on Science and Technology for Development played a key role as the UN system's torch-bearer for science, technology and innovation issues.

ITU Secretary-General Hamadoun Touré told the meeting that broadband Internet had a crucial role to play in accelerating progress towards meeting the United Nations Millennium Development Goals. He also provided information on the highlights of the WSIS Forum 2013, and the World Telecommunication Policy Forum held in May in Geneva.

Professor Heuer, the Director-General of CERN, said that science was universal, and that all regions needed to step up their support for research and innovation in order to ensure progress in a globally competitive environment.

Mr. Alhadeff, of ICC-BASIS, expressed strong support for the priority themes of the Commission on Science and Technology for Development, and stressed the importance of close cooperation between governments and business to enable achievement of the full potential offered by technology.

And Mr. Afonso, of the NUPEF Institute, highlighted the importance of multi-stakeholder governance of the Internet, and of guaranteeing the fundamental right of access to an open and neutral Internet. He warned that the "digital divide" was continuing to widen, with only 6 per cent of people in least developed countries (LDCs) enjoying Internet access in 2011.

Presiding over the Commission on Science and Technology for Development was Chairman Miguel Palomino de la Gala, Ambassador of Peru.