The global economy will continue to grow at a steady pace of around 3% in 2019 and 2020 amid signs that global growth has peaked. However, a worrisome combination of development challenges could further undermine growth, according to the United Nations World Economic Situation and Prospects 2019, which was launched on 21 January.

He said the World Economic Situation and Prospects 2019 “raises concerns over the sustainability of global economic growth in the face of rising financial, social and environmental challenges.” 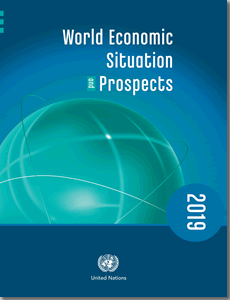 Growth in the United States is projected to decelerate to 2.5% in 2019 and 2% in 2020, as the impulse from fiscal stimulus in 2018 wanes. Steady growth of 2.0% is projected for the European Union, although risks are tilted to the downside, including a potential fallout from Brexit.

Growth in China is expected to moderate from 6.6% in 2018 to 6.3% in 2019, with policy support partly offsetting the negative impact of trade tensions. Several large commodity-exporting countries, such as Brazil, Nigeria and the Russian Federation, are projected to see a moderate pickup in growth in 2019–2020, albeit from a low base.

However, economic growth is uneven and is often failing to reach where it is most needed. Per capita incomes will stagnate or grow only marginally in 2019 in several parts of Africa, Western Asia, and Latin America and the Caribbean. Even where per capita growth is strong, economic activity is often driven by core industrial and urban regions, leaving peripheral and rural areas behind. Eradicating poverty by 2030 will require both double-digit growth in Africa and steep reductions in income inequality.

Further clouding the prospects are a confluence of risks with the potential to severely disrupt economic activity and inflict significant damage on longer-term development prospects. These risks include waning support for multilateral approaches; the escalation of trade policy disputes; financial instabilities linked to elevated levels of debt; and rising climate risks, as the world experiences an increasing number of extreme weather events.

The contemporaneous appearance of several important risks endangers efforts to achieve the 2030 Agenda for Sustainable Development – the universally adopted plan containing 17 specific goals to promote prosperity and social well-being while protecting the environment.

“Alongside various short-term risks, there is an increasing urgency to deal with much more fundamental problems. What we have hitherto viewed as long-term challenges, such as climate change, have become immediate short-term risks,” Elliott Harris, UN Chief Economist and Assistant Secretary-General for Economic Development, said.

The report underscores that strengthening global cooperation is central to advancing sustainable development. The multilateral approach to global policymaking is facing significant challenges, including a trend toward greater unilateral actions. Pressures have materialized in the areas of international trade, international development finance and tackling climate change. These threats come at a time when international cooperation and governance are more important than ever – many of the challenges laid out in the 2030 Agenda for Sustainable Development are global by nature and require collective and cooperative action.

Waning support for multilateralism also raises questions around the capacity for collaborative policy action in the event of a widespread global shock.

Amid the rise in global trade tensions, global trade growth moderated over the course of 2018, from growth of 5.3% in 2017 to 3.8%. While tensions have materially impacted some specific sectors, stimulus measures and direct subsidies have so far offset much of the direct economic impacts on China and the United States.

These impacts can be expected to spread through global value chains, particularly in East Asia. Slower growth in China and the United States could also reduce the demand for commodities, affecting commodity exporters from Africa and Latin America.

As global financial conditions tighten, an unexpectedly rapid rise in interest rates or a significant strengthening of the US dollar could exacerbate emerging market fragilities, leading to a heightened risk of debt distress.

A fundamental shift in the way the world powers economic growth is imperative. Economic decision-making must fully integrate the negative climate risks associated with emissions. This can be achieved through tools such as carbon pricing measures, energy efficiency regulations such as minimum performance standards and building codes, and reduction of socially inefficient fossil fuel subsidy regimes.

Governments can also promote policies to stimulate new energy-saving technologies, such as research and development subsidies. In countries that remain highly reliant on fossil fuel production, economic diversification is vital.