Contraction largely caused by US multinationals repatriating earnings from abroad.

Global foreign direct investment (FDI) flows slid by 13% in 2018, to US$1.3 trillion from $1.5 trillion the previous year – the third consecutive annual decline, according to UNCTAD’s World Investment Report 2019.

The contraction was largely precipitated by United States multinational enterprises (MNEs) repatriating earnings from abroad, making use of tax reforms introduced by the country in 2017, designed for that purpose.

Hardest hit by the earnings repatriation were developed countries, where flows fell by a quarter to $557 billion - levels last seen in 2004.

“FDI continues to be trapped, confined to post-crisis lows. This does not bode well for the international community’s promise to tackle urgent global challenges, such as abject poverty and the climate crisis,” UNCTAD Secretary-General Mukhisa Kituyi said.

“Geopolitics and trade tensions risk continuing to weigh on FDI in 2019 and beyond,” he cautioned.

The tax-driven fall in FDI, which occurred in the first two quarters, was cushioned by increased transaction activity in the second half of 2018. The value of cross-border merger and acquisitions (M&As) rose by 18%, fueled by United States MNEs using liquidity in their foreign affiliates. 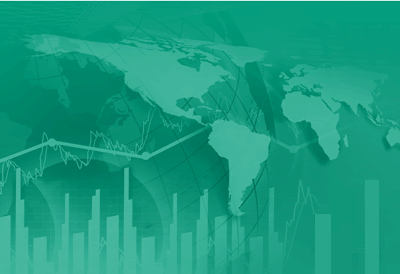 Developing country flows managed to hold steady (rising by 2%), which helped push flows to the developing world to more than half (54%) of global flows, from 46% in 2017 and just over a third before the financial crisis.

Half of the top 20 host economies in the world are developing and transition economies.

Despite the FDI decline, the United States remained the largest recipient of FDI, followed by China, Hong Kong (China) and Singapore.

In terms of outward investors, Japan became the largest followed by China and France. The United States was out of the top 20 list, due to its MNEs massive repatriation of investment earnings.

In 2019, FDI is expected to recover in developed economies as the effect of the U.S. tax reforms winds down.

Greenfield project announcements – indicating forward spending plans – also point to a rise, as they were up 41% in 2018 from a low in 2017.

Nevertheless, the weak underlying FDI trend indicates that a rise in FDI may be relatively modest and may be further reined in by other factors, such as geopolitical risk, escalating trade tensions and a global shift towards more protectionist policies.

The underlying FDI growth trend has been anemic since 2008. If one-off factors such as tax reforms, megadeals and volatile financial flows are stripped out, FDI over the past decade averaged only 1% growth per year, compared with 8% between 2000 and 2007, and more than 20% before 2000.

“The stagnating trend of the decade is ascribed to a range of factors that include declining rates of return on FDI, the increasingly asset-light forms of investment and a generally less favourable investment policy climate,” said UNCTAD’s investment and enterprise director, James Zhan.

“However, the current trend is more of policy driven than economic cycle driven,” he emphasized.

State-owned MNEs are close to 1,500, with their presence in the top 100 global MNEs increased by one to 16.

The value of their M&A activity shrank to 4% of total M&As in 2018, following a gradual decline from more than 10% on average in 2008–2013. Much of the continued expansion of international production is driven by intangibles.

The longer-term trend also shows the growth of non-equity modes of international production outpacing FDI, as evidenced by the relative growth rates of royalties, licensing fees and services trade.

The top 100 MNE ranking for 2018 shows the importance of industrial MNEs sliding, with some dropping out of the list.

MNEs in the global top 100 account for more than one third of business-funded R&D worldwide. International greenfield investment in R&D activities is sizeable and growing.

A significant part of investment between developing countries (South–South FDI) is, however, ultimately owned by developed-country MNEs.

Foreign direct investment inflows, global and by group of economies, 2007-2018
(Billions of dollars and per cent) 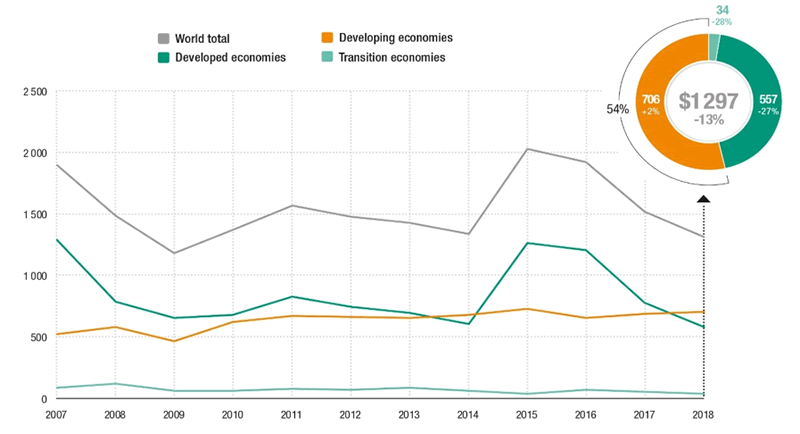 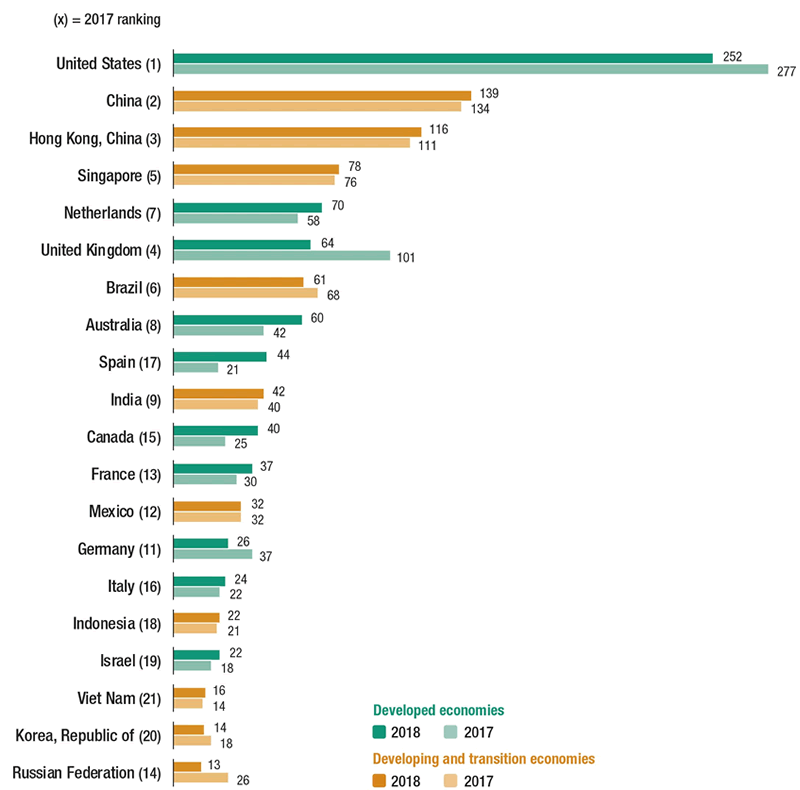 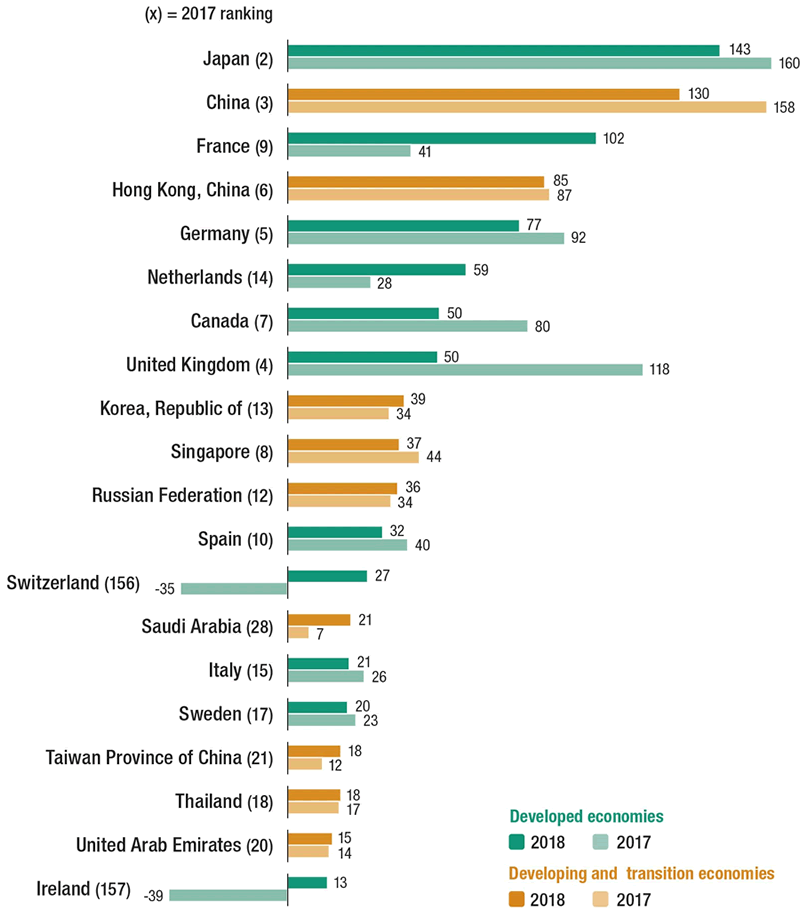