An UNCTAD review of Lebanon’s investment policy has underscored areas where the Middle Eastern nation can improve and amplify foreign direct investment (FDI) beyond the sizable $2 billion it has secured annually since 2003.

The Lebanese real estate and construction sectors have been the big FDI winners over this time and experienced higher growth. In general, FDI has fuelled job creation, and new sectors such as information technology and industry 4.0 are expanding.

Lebanese Prime Minister Saad Hariri said his government “is pushing for change” that will see Lebanon leverage a competitive advantage that has made it a regional success story over more than a decade. 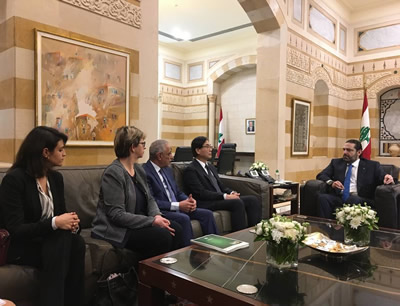 Mr. Hariri endorsed the UNCTAD Investment Policy Review (IPR) recommendations and indicated that Lebanon would work with UNCTAD to implement them.

The review makes a set of recommendations to help Lebanon reform its investment climate and adopt a strategic approach to investment promotion with a focus on the information economy.

Chief among these are measures to correct regulatory issues. Lebanon could, for example, remove restrictions on investor entry and address the high level of market concentration by adopting a competition framework.

The IPR also encourages Lebanon to focus on competitiveness by adopting a series of eGovernance solutions.

The Investment Policy Review of Lebanon was discussed at the United Nations in Geneva in December 2018 and officially presented at an in-country launch of the IPR in Beirut on 6 March 2019.

Here Lebanon’s minister of information, Jamal Jarrah, standing for Mr. Hariri, stressed it would implement reforms for economic growth and job creation, especially for youth. He added these objectives aligned with the IPR recommendations.

Speaking about the main findings and recommendations, UNCTAD investment and enterprise director, James Zhan, highlighted the importance of a strong leadership, a strategic approach, a sound regulatory and institutional framework, as well as the involvement of all stakeholders.

“Outdated processes hold back competitiveness, such as business establishment, land title registration or land valuation. In the area of taxation, despite efforts to introduce eGovernment initiatives, paying taxes remains a lengthy process.”

Business was hopeful that the IRP could support growth.

The chairman of the Investment Development Authority of Lebanon (IDAL), Nabil Itani said: “Our hope is that the IPR accompanies the development efforts of Lebanon”.

The IPR proposes several reforms to the structure and functions of IDAL, to position the country as a leading regional and global destination for investors in the information economy.

Key priorities include a focus on capacities, awareness and institutional cooperation, the preparation of the investment promotion strategy, and the expansion of knowledge and networks for targeted activities.

The launch was attended by a cross-section of Lebanon’s most senior leadership, including ministers and directors-general from different ministries and the prime minister’s office, and representatives of development partners and private sector.

These include support for entrepreneurship, the enhancement of the competition and consumer protection legal frameworks, and capacity-building.

In parallel to the official launch, a capacity-building workshop was organized to assist Lebanon's government with the amendment of investment regulatory framework.

To date, UNCTAD has supported more than 50 developing countries and economies in transition by conducting investment policy reviews. It has also provided technical support to implement the reviews’ recommendations.