Solomon Islands and Vanuatu gear up for e-commerce

They are among the poorest and most remote countries in the world but opportunities to benefit from the digital economy are within reach according to two new UNCTAD reports.

Consumers and businesses in two remote Pacific island nations can look forward to a better connected and more prosperous future according to assessments made by UNCTAD of their readiness to benefit from electronic commerce.

Part of the eTrade for all Initiative, UNCTAD presented Rapid eTrade Readiness Reports to the governments of the Solomon Islands and Vanuatu in the region on 16 and 18 July.

For the Solomon Islands, made up of more than 900 islands some 2,000 kilometres northeast of Australia, the report came a week after a deal was signed with the Australian government to lay an undersea cable that will significantly boost internet speeds.

“We spend billions of dollars a year on foreign aid and this is a very practical way of investing in the future economic growth of our neighbours in the Pacific,” Australian Prime Minister Malcolm Turnbull said. 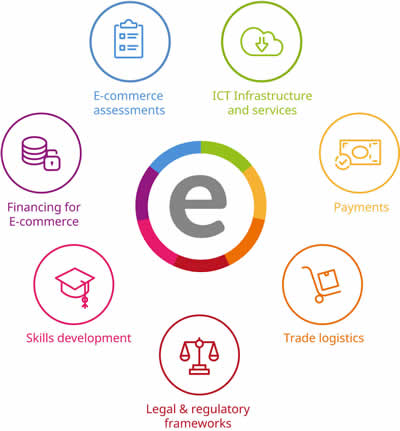 The project will link the two nations to the Australian mainland, as well as connecting the Solomon Islands’ capital Honiara with the archipelago’s outer islands.

The move comes as the Solomon Islands seeks to diversify its economy so that sectors like timber and mining can be supplemented with strengthened e-commerce-enabled sectors such as agriculture, fisheries and tourism.

“The liberalization of the telecommunications sector in 2009 led to high mobile telephony penetration and a revolution in terms of connecting people in remote areas to the government, banking services and with each other,” the UNCTAD report notes.

Speaking at the launch of the report, acting permanent secretary and trade commissioner for the foreign ministry Joseph Ma’ahanua said “the e-trade sector provides numerous and far-reaching benefits for the country,” reported The Island Sun newspaper.

UNCTAD consultant Sven Callebaut said trade was a lifeline for the Solomon Islands and e-commerce is the lever by which private sector development and trade competitiveness can be realized.

“By undertaking this assessment, the government has demonstrated its commitment and can take an initial step toward developing a robust e-commerce ecosystem,” he told Solomon Fresh Beat Online.

The assessment also notes that since its deployment in 2015, UNCTAD’s ASYCUDA automated customs system has helped the Solomons’ customs agency collect an estimated $130 million (1 billion Solomon Island dollars) in revenue.

The system automates customs procedures, improving processing times, transparency, and time to shelf for many of the country’s imported products including food items.

Meanwhile, about 1,000 kilometres southeast of the Solomons, the tiny nation of Vanuatu is also looking toward an online economy by considering its own Rapid eTrade Readiness Assessment.

The report was launched in Porta Vila in the presence of Deputy Prime Minister Bob Loughman.

“Yet, the combination of government willingness and efforts, public investments in information, technology and communications (ICT) infrastructure (with a goal of 98% of the population covered by a mobile signal by 2018) and trade facilitation on top of a favourable regulatory regime in recent years have created solid foundations for the country to benefit from the digital revolution other economies in the region have started to enjoy.”

As well as being “sealocked” (in the words of the report), Vanuatu has several challenges its government will need to overcome to make the most of the digital future.

“E-commerce adoption by businesses, especially micro, small, and medium-sized enterprises, in Vanuatu will require confidence and trust in electronic payment solutions, which are not yet widespread,” the report says.

“Similarly, in order to invest in ICT solutions towards moving to online solutions later, banks and microfinance institutions must work hand in hand with the government and leading business associations to ensure that financing gaps are bridged. This could also motivate business incubators and venture capital from Australia, New Zealand and other Pacific Islands nations to put Vanuatu e-commerce on their investment map.”

The Solomon Islands and Vanuatu assessments are part of UNCTAD’s commitment to help integrate small island developing states into the global trading system and support them in mitigating their economic and geo-climatic vulnerabilities.

“The Rapid eTrade Readiness Assessments for Vanuatu and Solomon Islands enable the development of a coherent vision by the governments to develop their e-commerce ecosystems and better integration with regional and global economies,” Shamika N. Sirimanne, director of UNCTAD's technology and logistics division, said.

“They will also support broader efforts among the Pacific Island Forum states to leverage the potential for e-commerce for national trade and private sector development.”

The Rapid eTrade Readiness Assessments were the ninth and tenth conducted by UNCTAD and the second and third for a Pacific islands nation after Samoa in July 2017.

“The launch of these new assessments represents an important milestone, but the real impact will be secured when the concrete recommendations included are effectively implemented,” Ms. Sirimanne said.

“Together with other partners of the eTrade for all initiative, UNCTAD stands ready to assist Vanuatu and Solomon Islands in this context."

Requests for eTrade Readiness Assessments have also been received from Kiribati and Tuvalu, which UNCTAD hopes to support in coming months.

The Solomon Islands is scheduled to leave behind its Least Developed Country status – after an improvement in fundamental economic indicators but entailing loss of some preferential treatment – with Vanuatu likewise recommended by the United Nations to graduate in 2020.

UNCTAD held a workshop on achieving structural economic progress toward and beyond graduation from Least Developed Country status in the Pacific in the Vanuatu capital Porta Vila on 20–21 June.