The State of Palestine's envoy to the UN in Geneva, Ibrahim Khraishi, has officially submitted a letter from President Mahmoud Abbas seeking membership of the UN Conference on Trade and Development (UNCTAD).

Mr. Khraishi, who is the Palestinian Ambassador Extraordinary and Plenipotentiary Permanent Observer, hand delivered the letter from President Abbas on 24 May to UNCTAD Secretary-General Mukhisa Kituyi. The letter expresses the State of Palestine's intention to become a member of UNCTAD.

As part of the UN Secretariat, rather than a specialized agency, UNCTAD's responses to all major international issues are based on consultations with the global secretariat of the United Nations and, following the State of Palestine's request, it has begun these with UN headquarters in New York. 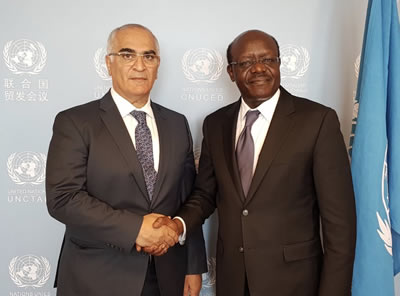 Under UNCTAD's rules of procedure, the Geneva-based organization's members are states which are already members of the United Nations -- or of the world body's specialized agencies, which is the case of the State of Palestine, part of the UN Education, Scientific and Cultural Organization (UNESCO).

The request to join UNCTAD comes as the State of Palestine has also applied to be part of the UN Industrial Development Organization (UNIDO) and the Organization for the Prohibition of Chemical Weapons (OPCW).