Over 700 participants came together in Brasilia for the Consumers International (CI) World Congress set to “unlocking consumer power.” The implementation of the UN Guidelines for consumer protection and UNCTAD’s upcoming meeting on consumer protection were the two major issues for discussion.

“The revised United Nations Guidelines for Consumer Protection and the Sustainable Development Goals(SDGs) go hand in hand to ensure consumer welfare worldwide,” said President Dilma Rousseff at the opening ceremony of the 20th Consumers International Word Congress, on 19 and 20 November 2015 in Brasilia. 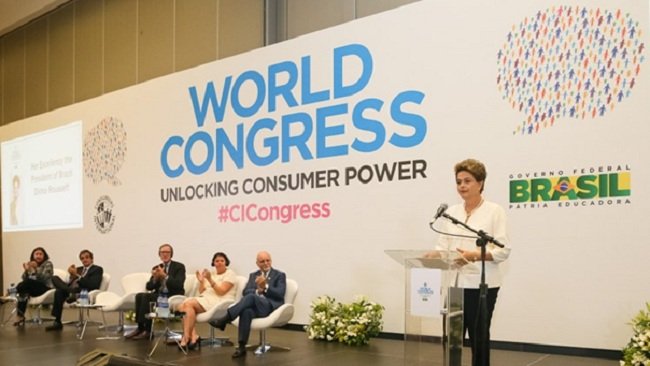 In his statement, the United Nations Secretary General Ban Ki-moon affirmed “empowered consumers must continue to be on the leading edge of change as we implement Agenda 2030” and thanked “UNCTAD for supporting negotiations to revise the UN Guidelines for Consumer Protection”.

The event brought together over 700 delegates from governments, private sector and CI member consumer groups for two days of discussions on “Unlocking consumer power.”

The first day the High Level panel looked at “opportunities and challenges in a fast changing world.” Claudia Plitanski, Itaú Bank Vice-President, noted a change of approach between governmental agencies for consumer protection and businesses: confrontation has given way to collaboration, and a conscience of shared interests among governments, consumers and business has emerged.

In the global context, Nathalie Homobono, Director General for Consumer Affairs of France, praised the “collective work among all relevant stakeholders in revising the UN Guidelines for consumer protection”. As a result, she hopes “UNCTAD will channel multilateral efforts for a more coordinated global consumer protection in achieving the SDGs.”

State Secretary for Justice and Consumer Protection of Germany Gerd Billen noted nevertheless that “consumer issues are not at the top of the political agenda yet, so it is time to roll the drums.”

The High-Level Panel was followed by a discussion on “Delivering positive change – bringing alive the newly revised UN Guidelines for Consumer Protection.”

Panellists reflected on the expectations for the upcoming Intergovernmental group of experts on consumer protection law and policy (IGE), under the auspices of UNCTAD. One of the major expectations is the institutionalization of discussions on global consumer challenges, such as cross-border deceptive practices, double standards and redress.

Mirroring the existing and successful IGE on competition, Member States wish the IGE on consumer protection to serve as a forum for the exchange of best practices, build national capacities, and conduct voluntary peer reviews.

All participants agreed on the need to ensure that consumer groups and business are involved in building a global agenda for the benefit of citizens.

The last panel discussion on 20 November looked at “International trade – placing consumers at the heart of trade: towards a positive consumer agenda for global trade policy and negotiations”.

Consumer advocates need to present their case in terms of trade advantages, highlighting the positive and negative impacts of certain policies in the life of consumers.

Consumer protection could also become a new aspect of trade negotiations, in particular the redress mechanisms for consumers, which would yield a great impact on the latter’s welfare.

In conclusion, participants highlighted the need for more reflection and research on the issue of consumer protection in order to be ready to tackle current and future challenges in this area.