Action taken to boost jobs and growth by harnessing the enormous potential of fisheries and aquaculture in least developed countries.

UNCTAD and the Nha Trang University of Viet Nam have agreed to open a new Regional Centre of Excellence in Viet Nam to serve as a hub for fisheries and aquaculture in least developed countries in Africa and Asia.

Although the fish sector is one of the world’s fastest growing industries and least developed countries are some of the biggest producers of fish, their share in global exports remains at a paltry 2%.

Despite the size and economic importance of fisheries in these countries, the sector remains largely informal, dominated by traditional or artisanal activities, with limited access to industrial food processing or transformation of fish into high-value added products.

The new centre will bring together experts and policymakers from least developed countries to exchange experiences, best practices and knowledge, with training as a central component of its work. 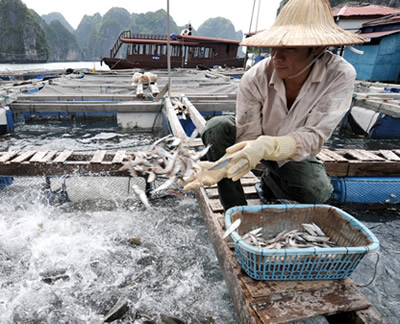 “The goal of the centre is to enable least developed countries to better harness the sustainable development potential of the fisheries and aquaculture sector and diversify and increase their exports.”

Mr. Akiwumi said that the planned training will “build on the successful experience of host country Viet Nam in developing their fisheries sector, as well as the extensive institutional and research capacities available in the country.”

Viet Nam is a good example of a developing country that has transformed its fishing sector and integrated its fish products into global markets.

The fishing sector employs more than 8 million Vietnamese and exports fish and fish products worth up to $15 billion a year. Exports have also managed to penetrate major foreign markets and supply chains.

Vietnamese fish and seafood, for example, is sold in supermarkets and restaurants in the European Union and the United States, economies with strict safety requirements for imported food products.

“This is a clear example of Viet Nam’s ability to excel in compliance with public and private standards,” Mussie Delelegn, a senior economic affairs officer at UNCTAD, said. “Other developing countries have a lot they could learn from Viet Nam’s experience.”

“Viet Nam has experienced great diversification in the seafood chain,” he said. “They were able to introduce processing and manufacturing of fish and fish products. Pangasius, known locally as ‘tiger fish’ is one such example.”

“Fish processing offers a great potential for women’s employment,” he added. “In Viet Nam many women are employed in sorting, preparing fillets, and other manufactured products from fish.”

The fisheries sector has the potential to generate employment and income across the value chain, including in transportation and logistics, services and research.

Better management of the fisheries sector supports better nutrition for large parts of the population and can lead to a more sustainable use of marine resources.

It is also a significant source of jobs and income for men and women in coastal and inland communities.

Nha Trang University (NTU) is one of the largest institutions of higher education in Viet Nam with a total student population of 15,000. Current students from Africa include students from Liberia, Nigeria, Namibia, while students from Asia hail from Cambodia, Myanmar, the Lao People's Democratic Republic, Mongolia and Sri Lanka. There are several exchange students from France, Norway and the United States of America, among others.