Maritime transport is the backbone of international trade and the global economy. According to UNCTAD, over 80 per cent of global trade by volume (metric tons) was carried by sea and handled by ports worldwide in 2015. In value terms, existing estimates indicate a share ranging between more than 50 per cent and two-thirds. These shares are even higher in the case of many developing countries.

There are more than 50,000 merchant ships trading internationally, transporting every kind of cargo.

The world fleet is registered in over 150 nations and manned by more than a million seafarers of virtually every nationality.

Estimates for 2015 indicate that, for the first time on UNCTAD's record, world seaborne trade volumes exceeded 10 billion tons. However, shipments expanded by a modest 2.1 per cent, a rate notably slower than the historical average. Developing countries accounted for the lion's share of both goods loaded (60%) and unloaded (62%) at seaports worldwide. 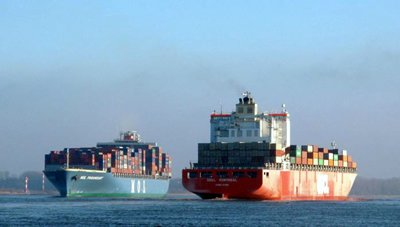 The World Fleet by Flag of Registration

The top 5 countries where the world shipping tonnage is registered are Panama, Liberia, Marshall Islands, Hong Kong China SAR and Singapore. UNCTAD fleet data also includes details by vessel type and shows how the share of container shipping tonnage has continued to increase between January 2015 and January 2016.

The largest ship building countries are China, the Republic of Korea, and Japan. Together, these three countries accounted for 91.4 per cent of gross tonnage constructed in 2015.

The ownership of the world fleet

The top 5 ship owning countries in January 2016 were Greece, Japan, China, Germany and Singapore. The Japanese owned tonnage, for example, is 65 per cent flying the flag of Panama, while Greek owned ships are more commonly registered in Greece, Marshall Islands and Liberia.

Most demolitions of old ships take place in Asia. Four countries - Bangladesh, India, Pakistan and China - accounted for approximately 95 per cent of ship scrapping in 2015.

The position of coastal countries within global container shipping networks is reflected through the LSCI (Liner Shipping Connectivity Index). In May 2016, the best connected countries in East Asia were China and the Republic of Korea; Singapore and Malaysia have the highest LSCI in South East Asia; Sri Lanka and India in South Asia; Morocco, Egypt and South Africa in Africa and Panama and Colombia in Latin America and the Caribbean.

Further statistics are available on bilateral liner shipping connectivity and port container traffic, which will be updated in coming months.

Note: The statistics are generated by UNCTAD based on data provided by Clarksons Research (the fleet, ship building and scrapping), Lloyds List Intelligence (liner shipping connectivity) and various national and specialized sources and websites.