Closures and other measures of Israeli occupation in the West Bank since 2000 exact $58 billion toll
The West Bank has suffered two decades of arrested development and poverty.

The cumulative economic cost of the tighter Israeli closure policy, restrictions and military operations in the West Bank since 2000 is estimated at $57.7 billion, according to the latest UNCTAD report to the UN General Assembly. The closure policy and restrictions were imposed by Israel after the outbreak of the second Palestinian Intifada (uprising) in September 2000.

The report, entitled “Economic costs of the Israeli occupation for the Palestinian people: Poverty in the West Bank 2000–2019”, estimates that the cost is equivalent to three and a half times the occupied Palestinian territory’s GDP in 2019.

It indicates that the minimum cost of eliminating poverty in the West Bank increased six times between 1998 and 2007; from $73 million (constant 2015 US$) to $428 million. Poverty and inequality rose dramatically in the aftermath of the second Intifada only to return to their pre-second Intifada level nearly two decades later.

The report points out that the immediate effect of the tighter Israeli restrictions imposed on the West Bank after the second Intifada was a drastic fall in living standards and that the poorer segments of the population were affected the most.

Two decades of jobless growth in the West Bank

The impact of the tighter Israeli restrictions and military operations in the West Bank was a contraction of one third of its size between 2000 and 2002. Furthermore, these restrictions had a negative long-lasting impact that affected all economic sectors for at least 20 years.

Although the regional economy in the West Bank grew by 6.2% annually since 2007, the growth was volatile, ranging from 13.1% in 2008 to 1.6% in 2019. This volatility is usually associated with a weak capacity for employment generation. Indeed, the West Bank unemployment rate was high, hovering around 18% between 2007 and 2019.

The incapacity of the constrained West Bank regional economy to generate jobs forces many Palestinians to seek employment in Israel and its settlements.

The figure below shows the strong negative correlation between the unemployment rate and the share of Palestinians working in Israel and the settlements, in total West Bank employment. This reflects the harmful dependence of the West Bank regional economy on Israel and its settlements for employment.

The West Bank: Unemployment rates, share of employment in Israel and settlements – Percentage 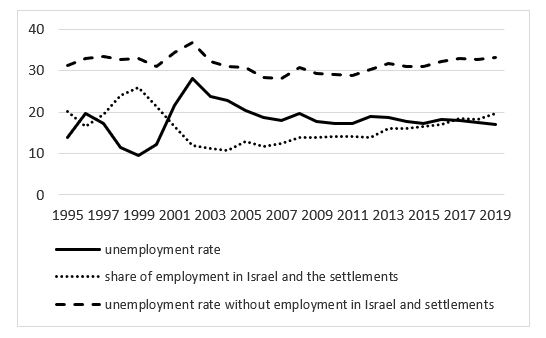 Without the jobs in Israel and its settlements, unemployment in the West Bank would have been much higher and would have almost reached the extremely high rates in the besieged Gaza Strip, which averaged 39.8% between 2007 and 2019.

Even with the employment in Israel, the West Bank regional economy has not been able to reduce or stabilize its unemployment rate since 1999. In other words, the West Bank has gone through two decades of jobless growth and arrested development.

The report calls for the lifting of all the mobility restrictions in the occupied Palestinian territory and for the re-establishment of the contiguity of the territory by reconnecting East Jerusalem, all the cities and villages in the West Bank and Gaza Strip with each other.

It also calls for the enabling of the Palestinian public and private sectors to establish and operate agricultural, industrial, commercial and mining businesses in Area C (more than 60% of the West Bank area). Until occupation is ended, these ramifications will continue to arrest Palestinian economic development while adding to the accumulated cost of the Israeli occupation for the Palestinian people.

The UN maintains its long-standing position that lasting and comprehensive peace can only be achieved through a negotiated two-state solution. It will continue to work towards the establishment of an sovereign, democratic, contiguous and viable Palestinian state, living side by side in peace with a secure Israel.