​Foreign direct investment (FDI) inflows to Africa as a whole remained stable at $54 billion in 2014, with decreases in North Africa being offset by rises in Sub-Saharan Africa, UNCTAD's World Investment Report 20151 has revealed.

North Africa saw its FDI flows decline by 15 per cent to $11.5 billion. FDI fell overall in the region because of tension and conflict in some countries, despite significant inflows to others. FDI into Egypt grew by 14 per cent to $4.8 billion, and flows into Morocco by 9 per cent to $3.6 billion.

In Sub-Saharan Africa, where investments from abroad rose by 5 per cent, there is variance by sub-region. FDI flows to West Africa declined by 10 per cent to $12.8 billion, as the Ebola outbreak, security issues and falling commodity prices negatively affected several countries.

East Africa saw its FDI flows increasing by 11 per cent to $6.8 billion. FDI rose in the gas sector in the United Republic of Tanzania, and Ethiopia is becoming a hub for multinational enterprises producing garments and textiles.

Central Africa received $12.1 billion of FDI in 2014, up 33 per cent from 2013. FDI inflows to the Republic of the Congo almost doubled, reaching $5.5 billion so that it became the second largest recipient country in Africa (Figure 1) with foreign investors undeterred despite falling commodity prices. The Democratic Republic of the Congo continued to attract notable flows.

Southern Africa received $10.8 billion of FDI in 2014, down 2.4 per cent from 2013. While South Africa remained the country that receives the most foreign investment in the region as well as on the continent ($5.7 billion, down 31 per cent from 2013), Mozambique – the recipient of the third largest amount of FDI in Africa – also played a significant role in attracting $4.9 billion. 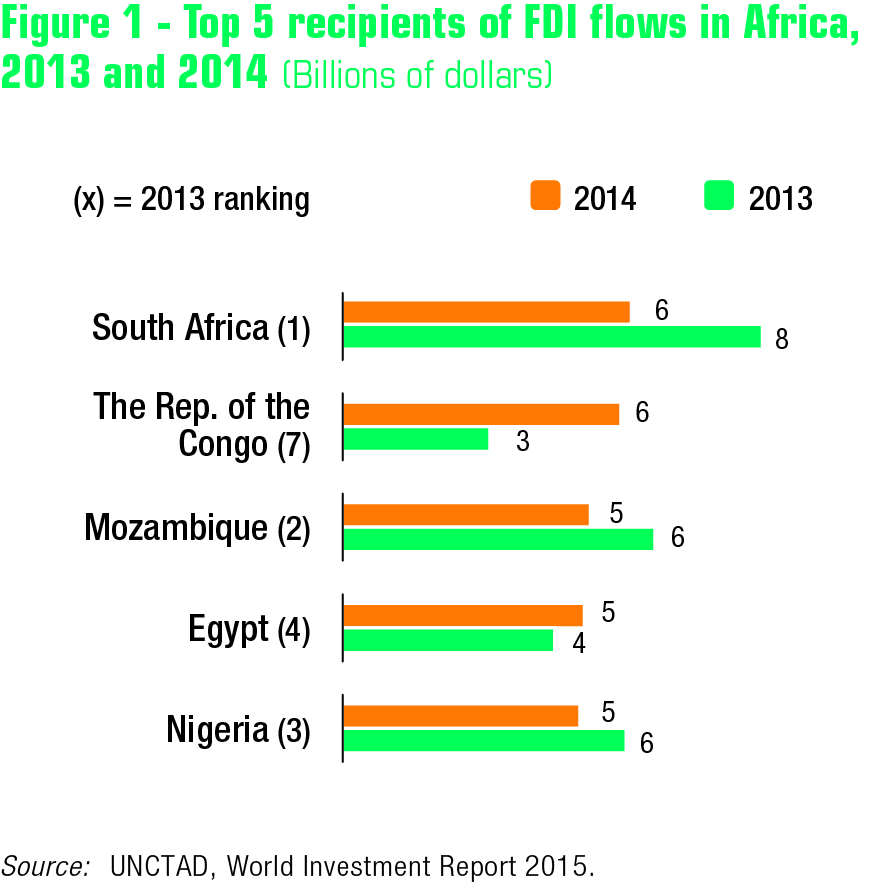 Foreign investment into Africa is increasingly being made by developing-country multinational enterprises, such as firms from China and India. Meanwhile, a number of firms from developed countries (in particular France, the United States and the United Kingdom) were large net divestors from Africa during 2014. Demand from developing-economy investors for these divested assets was significant. As a result, African mergers and acquisitions increased by 32 per cent from $3.8 billion in 2013 to $5.1 billion in 2014, especially in the finance and oil and gas sectors.

Services account for the largest portion of Africa’s stock of inward FDI, although the share is lower than in other regions, and concentrated in a relatively small number of countries, including Morocco, Nigeria and South Africa. Services FDI nonetheless accounted for 48 per cent of Africa’s total stock of FDI, more than twice the share of manufacturing (21 per cent) and significantly more than the primary sector (31 per cent) (Figure 2). 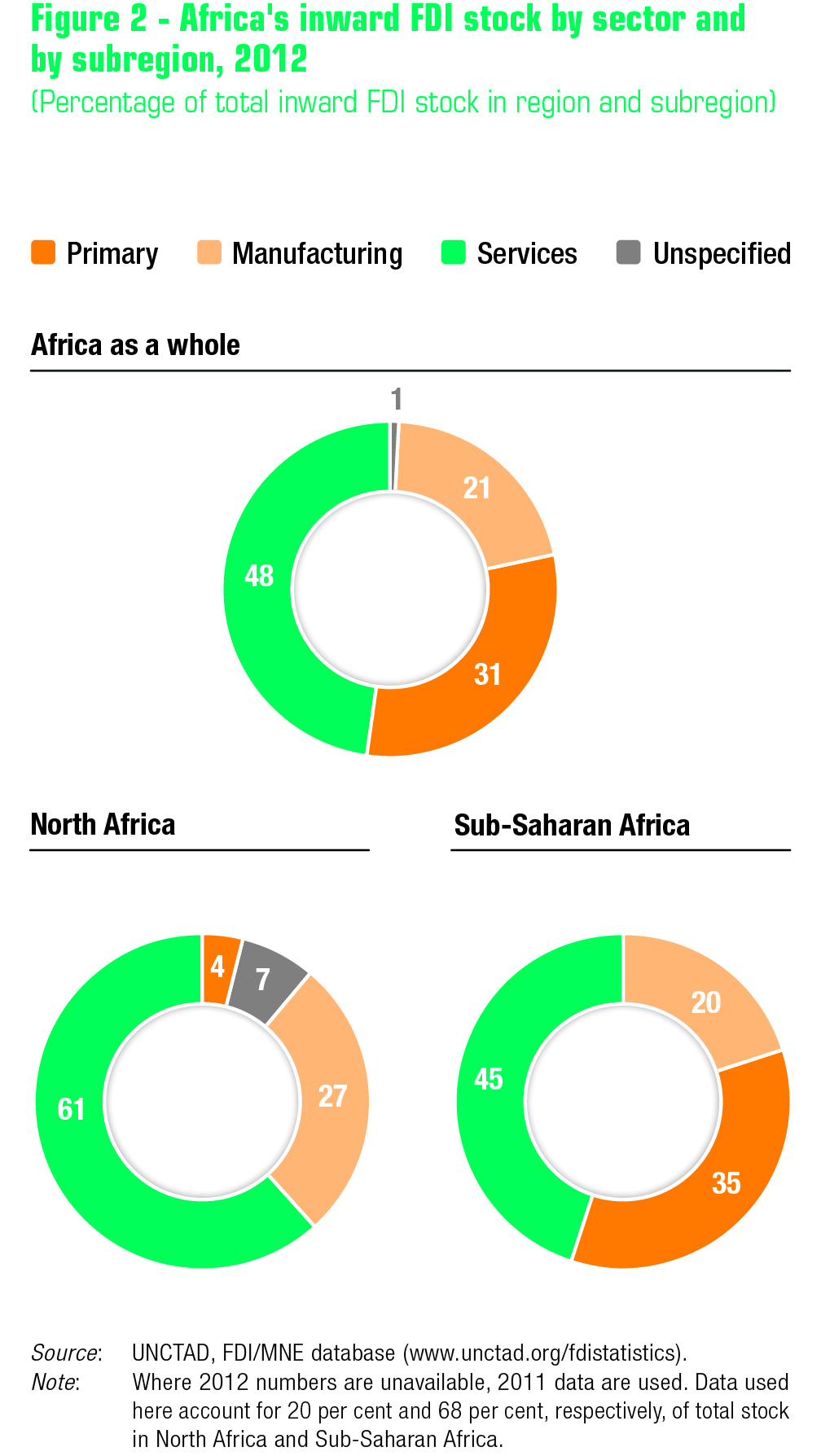 Finance accounts for the largest portion of Africa’s stock of services FDI; by 2012 more than half of Africa’s services FDI stock was held in finance (56 per cent), followed by transport, storage and communications (21 per cent) and business activities (9 per cent).

FDI into infrastructure and other services is becoming increasingly important. The stock of FDI into the transport, storage and communications industries grew more than four-fold between 2001 and 2012, from $8 billion to $34 billion. Although FDI accounts for a small portion of total infrastructure financing and development in Africa because of the wide use of non-equity modes of operation by multinational enterprises, FDI is increasingly visible in, for instance, the growing information and communications technology network as investors look to capture expanding consumer markets.

FDI in services is important in supporting the participation of African economies in global value chains, as an increasing part of value added in trade consists of services. It is also important in the context of financing progress towards the sustainable development goals.