Least developed countries lag behind in expected years of schooling 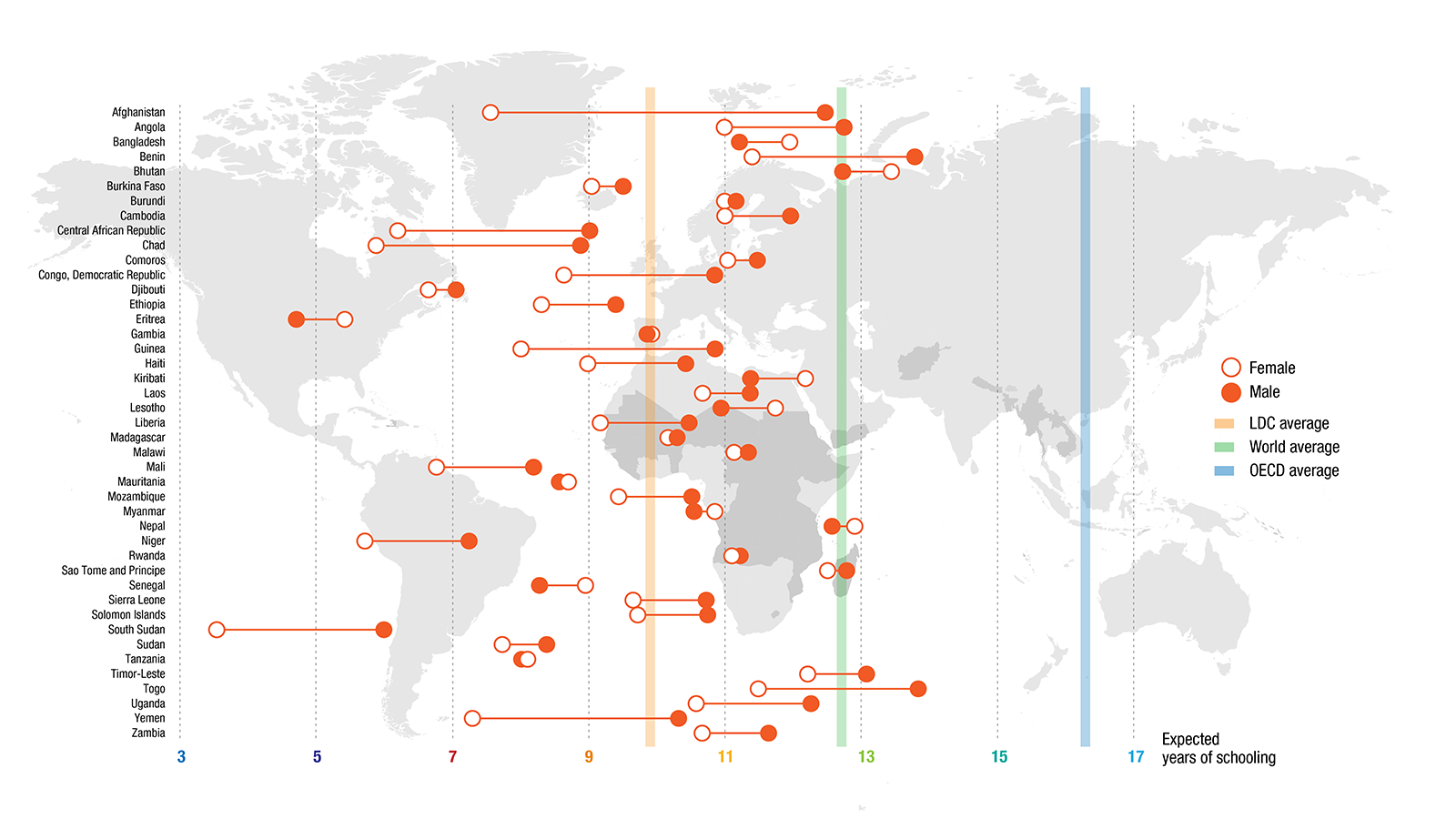 The Istanbul Programme of Action, which charts out the international community’s vision and strategy for the sustainable development of LDCs, prominently features education-related themes. So does the 2030 Agenda for Sustainable Development.

However, UNCTAD’s research has repeatedly highlighted how progress in human capital accumulation, which primarily hinges on education, has been somewhat lacklustre in many LDCs. This has been confirmed also by the performance of LDCs on the human capital component of UNCTAD’s Productive Capacities Index (PCI).

The above chart shows how LDCs trail other countries in expected years of schooling – the number of years of schooling that a child of school entrance age can expect to receive if prevailing patterns of age-specific enrolment rates persist throughout the child’s life.

The average child in LDCs is expected to attend 2.8 fewer years of school compared with the world average, with an even larger gap (6.4 years) vis-a-vis countries belonging to the Organization for Economic Co-operation and Development (OECD).

This is compounded by a related disparity in the quality of learning (albeit this dimension is more difficult to capture). In this regard, LDCs report lower results in harmonized test scores (those that are made comparable across countries) compared with other developing countries.

Furthermore, despite some progress towards greater gender equality over the last 20 years in expected years of schooling, gender gaps persist in most LDCs (more than 70%). This is particularly pronounced in countries affected by conflict and instability (especially in the Sahel region).

Such gender gaps might have far-reaching consequences and significant opportunity costs. This is because longer education for girls reduces the likelihood of early marriages and paves the way for women’s productive insertion in the labour market. Also, girls tend, on average, to have better learning outcomes than boys with a comparable expected years of schooling (in about one-third of LDCs).

These considerations assume even greater relevance currently, as COVID-19 has triggered enormous disruption to education systems across the globe. So has the subsequent heightened adoption of digital technologies.

While on average across all LDCs, government expenditure in education has hovered around 3% of GDP in the last decade, countries performing better in the above chart, such as Bhutan and Nepal, appear to spend relatively more on their education systems.

In addition, targeted, home-grown initiatives have proved successful in closing gender gaps, as in the case of Bangladesh’s support programmes for women in secondary education.

In this context, UNCTAD’s research has underscored how investments in human capital play a critical role for sustainable development in LDCs. In particular, better and more equitable education systems – including adequate vocational training programmes – support the emergence of more productive forms of entrepreneurship and pave the way for more conducive science, technology and innovation ecosystems.

Beyond formal education, UNCTAD has also highlighted the potential contribution of apprenticeships, on-the-job training, adult education and retraining programmes, whereby the upskilling process could be more directly linked to the needs of the local labour market.

The emergence of digitalization, the increasing servicification of the economy and new waves of technological innovation put a premium on specific skills, which require further training and human capital development.