For most of the world's most vulnerable countries, the promise of younger generations driving development and contributing to higher living standards will depend upon the right socioeconomic policy mix. 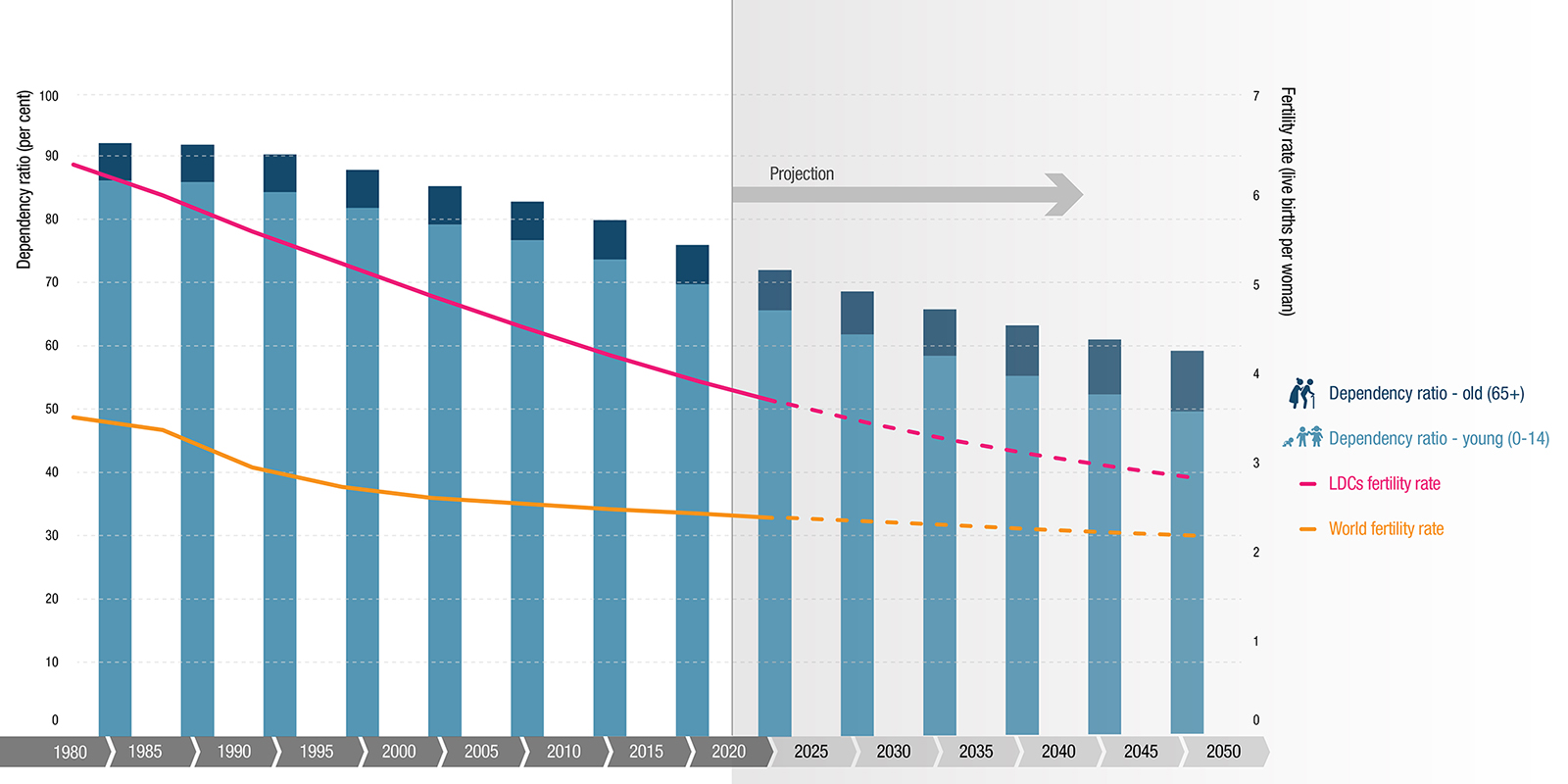 Despite the steady decline in the fertility rate in least developed countries (LDCs) since the 1980s, their populations remain among the fastest growing.

The above chart shows that between 2015 and 2020, the average fertility rate in LDCs was four children per woman, compared with a world average of 2.5. As a result of an increase in life expectancy and in the absence of a corresponding decrease in fertility rate, LDCs’ average population growth rate was estimated at 2.3%, about twice the world average (1.1 %).

These challenges are amplified by the COVID-19 pandemic, with long-term implications on the prospects for LDCs to harness the demographic dividend.

Specifically, LDCs remain at the early stages of a demographic transition (moving from a high-fertility, high-mortality regime to a low-fertility, low-mortality regime) progressing at a relatively slow pace compared to other developing countries, as well as advanced economies.

Meanwhile, LDCs will continue to experience strong growth in the working-age population (15-64), which is expected to double between 2020 and 2050, rising from 610 million to 1.2 billion.

In principle, a declining dependency ratio, together with an expansion of the working-age population, can create a window of opportunity for LDCs to realize large and sustained demographic dividends. But this is not automatic.

For most LDCs, the promise of younger generations driving development and contributing to higher living standards will depend upon the right socioeconomic policy mix.

A lower dependency ratio presents an opportunity for LDCs to increase investments in human capital by improving access to education and health, and enhancing gender equality and prospects for productive employment.

All of this, however, hinges on LDCs’ ability to generate sufficient productive employment to absorb new entrants in the labour market over the medium term.

Importantly, this goes well beyond a mere emphasis on self-employment and survivalist types of entrepreneurship. It rather warrants the strengthening of the whole entrepreneurial ecosystem, notably in terms of small and medium-sized enterprises and innovative types of firms.

The issue of how to respond to potential employment challenges and realize the demographic dividend despite the lingering impacts of COVID-19 and future shocks should be high on the agenda of policymakers.