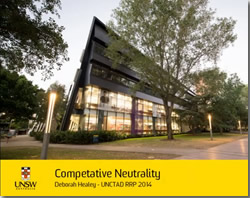 Competition law prevents overt anticompetitive conduct but does not ensure a level playing field for competition between state-owned enterprises (SOEs) and other government businesses and private enterprises.

Competitive neutrality is not appropriate in all cases where it hampers the achievement of important societal goals but where such claims are made they should be subject to objective determination.

Methods of ensuring that government bodies do not obtain an advantage over private enterprises include privatisation, effective governance, improving independence, accountability and disclosure. Ex post laws such as EU Art 86 can assist.

Ex ante, the implementation of a competitive neutrality framework is an effective means of addressing the issue. Australia introduced such a framework in the late 1990s and it has implemented significant reforms in the area.

The objectives of this project is to seek answers to the following questions by examining each of them for the jurisdictions of China, India, Malaysia and Vietnam; and come up with suggestions on how to ensure competitive neutrality:

Phase 1:Examination of each of the above-mentioned questions by jurisdictions of China, India, Malaysia and Vietnam.

Phase 2:Review of developments in other countries to assist with the development of suggested options.

Phase 3:Conclusions and recommendations: Formulation of recommendations on how and through which mechanisms to ensure competitive neutrality based on the observations on the selected jurisdictions and others reviewed within Phase 2.

The project has been completed.