Value chains that tap under-utilized sea species are the blue gold Barbados could use to jump-start an economic diversification strategy.

Barbados may be surrounded by the big blue, but its oceans economy remains under-used despite it being a big potential driver of both food security and export growth.

This may change as part of a United Nations effort to map and select turnkey oceans sectors for development – a move which will help it improve domestic and international trade.

Led by UNCTAD and the United Nations Division for Ocean Affairs and the Law of the Sea (DOALOS), the Oceans Economy and Trade Strategies (OETS) project recently hosted its first national stakeholder workshop on 26 and 27 February in Bridgetown, Barbados.

The workshop followed an initial field mission in June 2018 to gather sectoral economic and trade data and information on Barbados’ oceans economy and ocean governance framework. 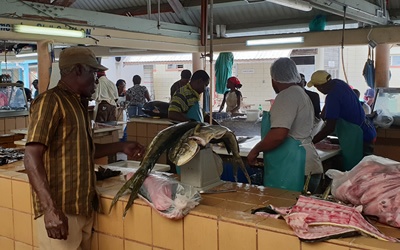 “Barbados’s ocean economy has major potential. This is evident in its land to exclusive economic zone, or EEZ, areas ratio of 1/434 – one of highest in the world,” Ms. Coke-Hamilton said.

An EEZ is a sea zone prescribed by the United Nations Convention on the Law of the Sea over which a state has special rights to explore and use of marine resources, including energy production from water and wind.

Barbados’s coastline is a competitive advantage it can use, the workshop heard, while discussing the findings of preliminary research on four ocean-based sectors: sustainable marine fisheries, seafood processing, sustainable aquaculture and coastal and marine environmental services.

A group of 30 experts from government, the private sector, academia and international organizations painted a broad picture of the linkages between Barbados and the multilateral trading system in the four key sectors.

Barbados can diversify its economy by boosting economic activities linked to sea assets and species that are under-exploited, the meeting heard.

Recent UNCTAD estimates indicate that the total local catch does not cover more than a fourth of domestic consumption. In 2017, the value of fish and fisheries products imports was 54 times that of exports.

Tuna is one example of an untapped species Barbados could leverage.

Currently, tuna landings stand below total allowable catch quotas set by the International Commission for the Conservation of Atlantic Tuna and downstream processing activities are at a nascent stage.

Stakeholders agreed that the tuna value chain offers the most potential and that a full assessment is needed.

“The current situation calls for a clear plan of action based on a reasoned balance between substitution of imports, promotion of exports and domestic value addition,” said UNCTAD economist Marco Fugazza.

Other related migratory high-value species, such as swordfish, may also be included in the assessment.

Spurred by tourism demand and better regulations, a domestic industry could flourish if demand and supply were properly matched.

“Appropriate regulations are needed not only to guarantee food security but also to promote exports. This project helps set the direction of such reforms,” said Barbados fisheries chief, Stephen Willoughby.

Barbados is also looking for ways to ‘export’ its coastal management model – but officials have recognized that a precise map of the domestic service economy is a necessary first step.

Indeed, UNCTAD research reveals that there is a limited understanding of underlying market forces. Economic evidence is also largely anecdotal, as in most countries, and no comprehensive assessments have been conducted to date.

“The rapid change of the sector’s boundaries, and the inability of product and statistical classifications to adapt to a fast-evolving reality, has generated a bias in negotiations and a lack of officially-reported statistics,” said UNCTAD economist Lorenzo Formenti.

Partnerships were also highlighted as crucial for Barbados. It is now exploring ways to unlock a strong environmental services sector with international agencies.

The workshop also teased out these opportunities and challenges and considered best practices from UN agencies working in country.

Experts from the Food and Agricultural Organization and the United Nations Environment Programme stressed the importance of trade as the key area in which to join forces on the blue economy.

Looking to the future, an inter-agency collaboration is being discussed.

National stakeholders concluded that the focus of the next OETS review phase should be the tuna sector and its value chain. A systematic assessment will be conducted over 2019 and national stakeholders will gather again in 2020 to discuss and validate findings. 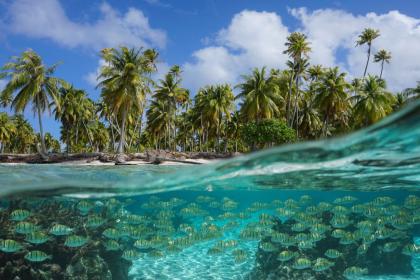