The world is doing far too little for small island states on the frontlines of the climate emergency. Now is the time to turn the corner.

Prime Minister of Barbados, Mia Amor Mottley, challenged the world to reinvent the international order and do better by small island states that are on the frontlines of the climate crisis, fighting for their survival in a war they did not start.

“An international order that is not inclusive, or strongly rooted in fairness and moral legitimacy will fail to halt and reverse climate change,” Ms. Mottley said while delivering the prestigious 16th Raúl Prebisch Lecture at the United Nations’ European headquarters in Geneva, Switzerland, on 10 September.

Ms. Mottley is the first woman to lead the island nation and the second woman to deliver the lecture established in 1982 to honour Argentine economist Raúl Prebisch, UNCTAD's founding Secretary-General.

The first woman to deliver the lecture was former Indian Prime Minister Indira Gandhi in 1983. Other past speakers include renowned scholars Jeffrey Sachs and Jagdish Bhagwati and Nobel Prize winners Joseph Stiglitz and Lawrence Klein, among others. 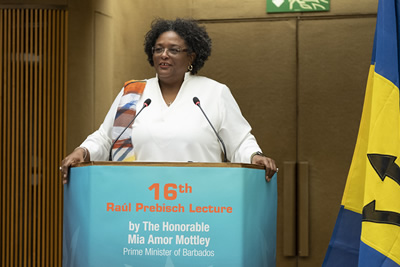 Speaking on the topic “Invisible Yet Indispensable”, Ms. Mottley drew attention to the daunting challenges facing small island states, saying “even if for many we are invisible, we are not dispensable.”

Ms. Mottley defended the rights of small islanders bearing the brunt of the climate emergency, saying she was committed to empowering them, giving them opportunity, a voice and a presence, even when others cannot or refuse to see them.

“Because it is the right thing to do - not just politically but morally,” Ms. Mottley said.

Prime Minister Mottley expressed disappointment at today’s political and social movements that are turning back the positive advances made in the past century.

“We are trespassing on ground that is best left in our history and not our future. And to this, we add the insidious threats of terrorism and, now, the existential threat of climate change,” she said.

In such times, only moral leadership can guarantee the rights of the voiceless and the invisible, she said.

“Just as we find it abhorrent today to contemplate, far less support, removing freedom and choice from other human beings, so must we also recognize that true freedom also requires changing the structural imbalances in power and wealth,” she urged.

Moral leadership is needed to address the power and wealth imbalance that persists in today’s world, crippling the development aspirations of many nations, Ms. Mottley underscored.

She cautioned that we must not be naïve in appreciating the head-start given to developed countries, which had the benefit of building their industrial base on the wealth taken from people thousands of miles away.

Ms. Mottley described independence without options for development as “a hollow experience that breeds cynicism and fosters marginalization.”

‘Too small to be seen or to matter to some’

Small island states fail to access markets on fair terms and fail to have correspondent banking services because they are simply too small to be seen or to matter to some, Ms. Mottley observed.

Since the global financial crisis of 2008, many global banks have decided to terminate or limit their correspondent banking services (also known as derisking) to different regions, including small island states, to avoid rather than manage risks.

Ms. Mottley described this practice as one “not rooted in moral legitimacy or leadership” as these banks “rely on their might and size as bullies do in a playground” and called on public officials to urge the reversal of this insensitive practice.

She called for a new international economic order to tackle deepening inequality within countries, for markets left to their own devices will favour the mighty and only occasionally, the lucky.

She extolled the moral leadership exemplified by greats like Mahatma Gandhi, Marcus Garvey, Martin Luther King Jr., Nelson Mandela and other public servants who championed fairness and equality of opportunity against great odds and won global support, albeit belatedly.

Time is running out

Ms. Mottley warned that time to harness global efforts to tackle problems such as the climate emergency – a problem too great for any one nation – was fast running out.

“What will it take for us to get the mighty of the world to protect us against the existential threat to our survival?” she posed.

It’s only a matter of time before those who bear the heaviest responsibility for causing climate change face its worst consequences, Ms. Mottley warned. “But we who are invisible do not have the luxury of time because we are busy trying to survive,” she said.

The climate crisis presents an opportunity to the current generation to assume leadership and establish its moral legitimacy, Ms. Mottley said. But climate change – like other global problems such as international terrorism and financial crime – can only be defeated through multilateralism, she said.

“If it matters enough, we can choose to end climate change. Our only limits are the limits to our imagination. We achieve what we put our resources behind.”

In waging the fight against climate change, Ms. Mottley said, the world must claim ground, secure it and move forward. “We need collective partnerships. We need new voices to inspire and to influence.”

She lauded the spirited efforts of the youth who are mobilizing and speaking up to demand more climate action from their leaders, saying these young people inspire hope for the future, and called on influencers to add their voices to the cause.

Ms. Mottley said the nations of the world could solve the climate crisis by single-mindedly deploying their technologies and resources to halting the problem. The nation that wins the technological race to beat climate change will become the most powerful, she argued.

She urged: “Let us choose to end climate change. We will achieve it. Human ingenuity will enable us to do so. But we cannot wait. Let us bring it forward.” 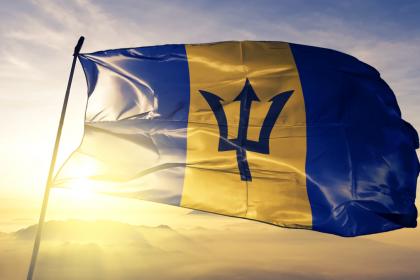 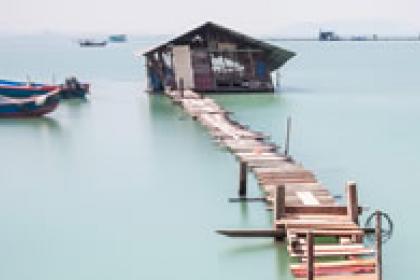 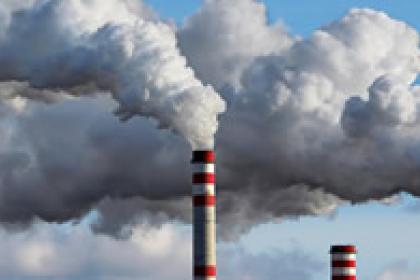