Small island nations are calling for global help to cope with the climate crisis unfolding in their backyard, as their ability to respond is curtailed by lack of finance.

His message: “Our extinction is imminent.”

“The climate crisis has taken away from us the ability to control our own destiny,” Mr. Chastanet told a gathering of the trade and international community.

“There are not many more storms that we can sustain and remain viable. Therefore, the urgency is now for us to be able to build resilience.”

He emphasized that the world needs to decide whether they want SIDS to exist and to offer an investment to match it. 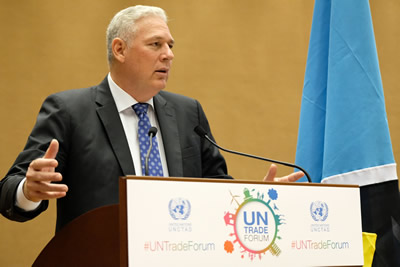 “What am I speaking about is drains, rivers, and bridges. These are civil engineering matters; it is not going to the moon. This (investment) is not, in relative terms, a huge amount of money, but relative to the size of our economies, for us it is a mountain too far. I speak to you as a human to say the SIDS need your help.”

“Climate change is not our responsibility. The SIDS represent less than 1% of global emissions. We can’t control our destiny through mitigation. The fact is, the only thing available to us is adaptation,” Mr. Chastanet said.

Adaptation costs money. Under the Paris Agreement on climate, countries have committed to jointly mobilizing US$100 billion per year by 2020 to address the needs of developing countries, including SIDS.

But this funding has not yet reached the SIDS, said Mr. Chastanet.

To mobilize the required billions to help SIDS survive the climate emergency, Mr. Chastanet called for both a revisioning of the classification of SIDS using a vulnerability index and a type of Marshall Plan.

He was joined by fellow island representatives from the Maldives and Jamaica, and the climate and trade community on the opening day of a weeklong forum.

Forum participants explored the linkages between trade, climate change, oceans economy and biodiversity. They exchanged innovative ideas and approaches on how global trade policies may support the implementation of the 2030 Agenda for Sustainable Development.

No man is an island

Traditionally, islands are emblazoned across tourism pamphlets, glorified as the epitome of natural beauty and portrayed as idyllic places of escape. But this image is far from the dark reality they face.

Changes in sea level, temperature, precipitation, a growing number of extreme storms and floods, visible vulnerability of critical infrastructure such as ports and airports, growing unpredictability, and the fact that there is nowhere to go, is a daily threat for the 65 million people living in 57 SIDS scattered throughout the world’s oceans.

Their climate emergency plight is an “existential crisis,” the UN Trade Forum heard. It is also a warning.

“What's happening today to small island developing states will happen tomorrow to all of us. No one is safe from the threat of climate change,” Commonwealth Secretary-General Patricia Scotland told the forum.

The situation is a matter of survival. “For a long time, we’ve been talking about climate change mitigation and resilience. We’re now at a point where we’re talking about survival,” UNCTAD Secretary-General, Mukhisa Kituyi, told the over 200 attendees gathered to discuss how trade can play a greater role as part of the climate solution.

Part of this solution is to introduce trade more prominently into the climate discussion. But the role of trade, which does not feature the Paris Agreement, is still not central despite its impacts on carbon emissions and mitigation.

“To face the climate crisis, we need all of us, all our tools and means. Trade cannot be a bystander,” said Pamela Coke-Hamilton, director of UNCTAD's division on international trade and commodities.

“The omnipresence of trade means that it cannot be left out of any climate policy. And it also means that sustainability cannot be an afterthought of trade policy but must be an inherent part of it,” she added.

Mr. Chastanet pushed aside his formal address to speak from the heart and humanize the tragedy as yet another devastating hurricane season hits the Caribbean.

He told of the devastation he had seen in Abaco and Grand Bahama following the category 5 Hurricane Dorian, and earlier destruction in Dominica and Haiti.

It brought home not only the need for climate mitigation and preparedness, but also “post-preparedness”, he said.

“We can respond to an emergency, but we have to go back to the drawing board to deal with what the post-preparedness is going to be.

“Is the Bahamas, for example, ready to migrate 50,000 people into Nassau? Is it ready to process those people by documenting them, putting them into new school systems, creating a subsidy system because they have lost their jobs and that part of the economy (tourism) is gone?” he asked.

“The requirement for normal primary surplus, is now dwarfed by the fact that we have to have sufficient resources to deal with the (extreme weather event) aftermath,” he said.

He was echoed by the Maldives’ minister of environment, Hussain Rasheed Hassan, who said the world must “find a way to improve our resilience to deal with the impending catastrophe and adapt”.

The SIDS will collectively present their solution, in the form of a SIDS Foundation, to the United Nations’ Climate Action Summit at the UN’s headquarters in New York on 23 September.

“Climate change is a clear and present danger to our existence,” said Daryl Vaz, Jamaica's minister without portfolio in the Ministry of Economic Growth and Job Creation.

“The climate change threat sends a signal to leaders to step up to the plate and face this challenge head-on,” he said.

The proposed foundation would act as a special purpose vehicle for post-disaster reconstruction and adaptation and would pull on sovereign funds for official development assistance for all SIDS to help them ready for a new normal.