Beijing International Forum on Creative Economy: A Dynamic Force for the Sustainable Development of Cities

​Organized under the 4th China International Fair on Trade in Services (Beijing), the Beijing International Forum on Creative Economy was opened by Vice-Mayor of Beijing Municipal Government, Madame Cheng Hong, who remarked that China is the second largest exporter and importer of services in the world with tourism, culture and recreational services in the growing trend.&#160;

Mr. Bruno Masier, President of the World Trade Point Federation, emphasized the need to discuss new issues and driving forces in the current landscape of the creative industries, creative entrepreneurship, cultural innovation, legal and policy frameworks and the perspectives for service, product and business development within the creative industries.

Mr. Dai Yudong, President of the Executive Committee of International Mayors Federation, highlighted that nowadays innovation and creation, knowledge production and talent resource are playing a strategic role in the creative economy.

Asia's rich cultural diversity, expanding networked economy and growing engagement and synergy within and beyond regional borders will highly influence the future of Asia's Creative Industries. China has been pushing towards creative economy at the center of its transition to an advanced innovation-driven, knowledge-based economy. It has surpassed the United States as lead exporter of cultural and creative goods since 2010. According to UNCTAD, the exports of cultural and creative goods from China accounted for US$151 billion in 2012. These industries account for 2.85% of the GDP in China in 2012 with the figures as high as almost 10% in some of the bigger Eastern seaboard cities. It has emerged as a growing importer and exporter in all cultural and creative domains, leading sectors include film industry, the news and publishing industry, broadcasting and TV industry, animation and games industries, online new media industry, advertising industry, fine art and performing arts industry according to the China Cultural and Creative Industries Report, 2013.

The second session discussed the creative economy and city transformation along the One Belt and One Road Initiative.

The representative from the city of Copenhagen highlighted that Copenhagen is home to world-class creatives, incubating innovative ideas and products in high demand. Creative industries make up 10% of Denmark's total exports, offering great opportunities for international businesses (Copenhagen Capacity). The Hon. Mayor of the City of Salzburg referred to the well-developed performing arts scene (Salzburg Festival) and how it has been important drivers of regional economic and social development. The Hon. Mayor of the City of Marathon (Greece) stressed the need of bringing ancient cities closer together through sports events, cultural exchanges, tourism and business. The representative from Dubai, presented the case of Dubai Creative City construction. The growth of creative industries in the Middle East and North Africa (Mena) region has been equally significant, with the design sector accounting for $100 billion in market value in 2014, according to the Mena Design Outlook report by the Dubai Fashion & Design.

Representatives from the cities of Baicheng, Liaoyuan, Panzhiua (China), Wojew o dztwo Kujawsko-Pomorskie (Poland) and other creative and innovative cities shared their experiences and discussed the possibility for further collaboration in the cultural and creative industries areas.

The One Belt one Road Initiative will stimulate greater cross-border cultural cooperation and will enhance mutual understanding between nations across the Silk Road. Digitalization, employment and the environment are at the center of the creative economy and are leading components of the innovation and transformation agenda for a more sustainable future.

The forum was organized by the Beijing Commission of Commerce, Beijing Center of World Trade Point Federation, Beijing International Economic and Trade Development Association, the International Mayor's Federation, and the Mengcheng Chamber of Commerce in collaboration with UNCTAD. The International Business Daily of MOFCOM was the media supporter. 600 representatives including experts and officials of international organizations, municipal governments, embassies in China, chambers of commerce and enterprises from over 50 foreign countries and 10 domestic cities attended the forum.

UNCTAD agreed to meet with Beijing authorities and international and local partners in September to discuss the possibility of organizing the Second International Forum on Creative Economy in 2017. 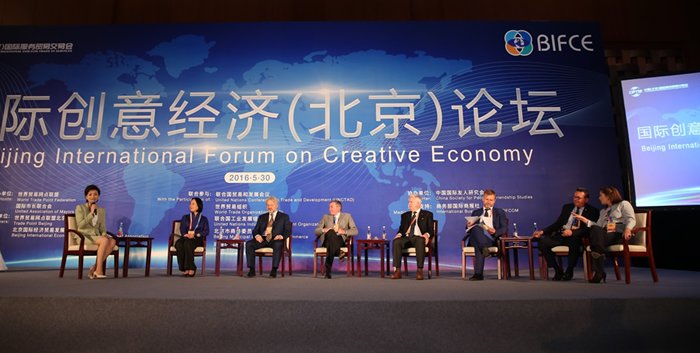