A workshop in Belize, supported UNCTAD and DOALOS, maps out new directions for the country's fish and seafood sectors.

Belize is looking to diversify its fish catch to include red snappers and groupers, and not just lobsters and conchs, after holding its First National Stakeholder Workshop on Ocean-based Sectors in Belize City on 28–29 November.

The central American country is tackling the challenge of guaranteeing food security and jobs in its essential seafood and fisheries sectors while maintaining the integrity of its marine environment.

The workshop, supported by UNCTAD and the United Nations Division of Oceans Affairs and the Law of the Sea (DOALOS) in cooperation with  the Commonwealth, gathered together about 25 stakeholders from state authorities, the private sector, and regional intergovernmental organizations to map out a strategy for two ocean-based sectors: 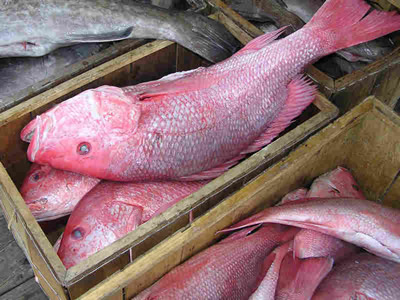 Production of lobsters and conchs in Belize, mainly destined for dinner plates in the United States, has remained stable for several years because the catch has probably reached the “maximum sustainable yield”.

“There is a clear need to diversify target species – with a focus on a range of pelagic finfish like red snappers and groupers – to scale up supply, strengthen food security, increase value addition and tap demand from locals and tourists alike,” UNCTAD legal officer David Vivas said.

UNCTAD economic officer Marco Fugazza added: “These species are currently underused and could be made into fish fillets and frozen fish parts, or used in sauces and canned products, for example.”

Production in both aquaculture and “mariculture” – the production of marine animals in an enclosed section of the ocean, or in tanks or ponds filled with seawater – must diversify from traditional shrimp farms after a 2015 outbreak of Early Mortality Syndrome (Hepatopancreatic Acute Necrosis Syndrome) which almost caused aquaculture production in Belize to collapse.

Demand for fish and seafood is rising from the tourism sector in Belize, which represents about 22% of GDP and more than $409 million in exports (2017). The industry also accounts for as much as 13% of all jobs in the country.

Opportunities are opening to build linkages between restaurants, tour operators and guide services, and the sustainable use of marine species.

“This could be on a ‘take’ basis, through fisheries, or a ‘not take’ basis, for example, ray and shark watching,” Mr. Vivas said.

“About 80% of the products and services bought by hotels and restaurants in Belize are bought nationally, and they have expressed an interest in purchasing from well-established national cooperatives to guarantee the quality, safety, sustainability and local content of fresh fish and seafood,” he added.

Rigoberto Quintana, a senior officer with the Belize fisheries department and Richard Reid, a senior officer at the trade directorate, welcomed the December workshop and thanked UNCTAD, DOALOS and the Commonwealth for joining forces to support Belize.

“For many years, the fish industry has not been considered a political priority in the country and this process was a unique opportunity to draw it to the attention of policymakers,” Mr. Vivas added.