India could save $624 billion a year by 2050 if it adopts circular economy principles rather than following a conventional but more wasteful development path, according to a new report on India produced by the Ellen MacArthur Foundation in association with UNCTAD.

The Ellen MacArthur Foundation, an economic research and innovation think tank, promotes the concept of a "circular economy", which is restorative and regenerative by design, and which aims to keep products, components and materials at their highest utility and value at all times.

"Today's linear ‘take, make, dispose’ economic model which relies on large quantities of cheap, easily accessible materials and energy, is increasingly challenged in the long term. A circular economy is an attractive and viable alternative that businesses are already exploring," the Ellen MacArthur Foundation said.

Pilot projects have already shown these practices contributing towards cost savings of hundreds of millions dollars per year.

Lessons from this work in India serve as an important example for other developing countries seeking to meet both the Sustainable Development Goals (SDGs) and commitments in the Paris Agreement. 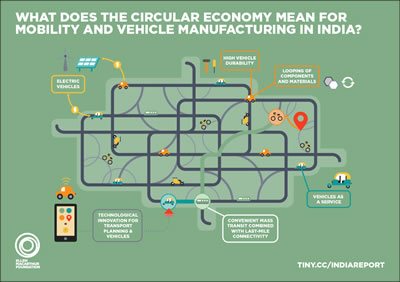 India's ambassador to the United Nations in Geneva, Ajit Kumar, said: "India is earnestly working towards finding ways to improve the living standards of its citizens, compatible with its resources. Sectors such as mobility, agriculture and construction will play a crucial role in the future growth of India. The suggestions contained in the report are therefore, noteworthy and timely."

Dame Ellen MacArthur, founder of the Ellen MacArthur Foundation, said: "This report builds on the Foundation’s previous analysis of the circular economy opportunity for Europe, by exploring for the first time the potential of applying the circular framework in a fast-growing market context. With its existing circular mindset and strong digital backbone, India can reap significant economic and societal benefits, embarking on a positive development path as it focuses on regenerative practices."

The report says that better product design and innovative business models could generate cost savings and increase profits for businesses, in parallel with the shift to digitally enabled platforms for asset sharing, such as Zipcar, in which procuring services replaces owning goods.

A shift from selling cars to providing vehicles as a service could create new revenue streams for India's car industry. Only about 2% of the Indian population currently owns a car, but the demand for mobility is increasing, the report says.

Using data from UNCTAD, the report estimates that India could save costs amounting 11% of its current GDP in 2030 and 30% of GDP in 2050 if proven circular approaches were adopted by the public and private sectors. Greenhouse gas emissions could be cut by 44%.

The report is the first conducted into a developing country by the Ellen MacArthur Foundation. The Foundation was set up by Ms. MacArthur, a world-famous British yachtswoman, in 2010.

The report was launched in New Delhi, India, on 5 December, and an international briefing will be held in Geneva, Switzerland, on 12 December.