Though unpopular, fossil fuels will remain necessary for decades, experts say at UNCTAD's Global Commodities Forum. The energy transition must therefore include the less dirty alternative of natural gas.

Fossil fuels are unfashionable but necessary, and the journey towards economies fueled by green energy begins with a switch from oil and coal to the cleaner option of natural gas, United Nations researchers and energy sector professionals said during the Global Commodities Forum​, meeting in Geneva from 23 to 24 April.

Regarding greenhouse gas emissions – the main culprit of global warming – natural gas is seen by most as a lesser evil than coal and oil. Per unit of energy produced, some estimates tally up to 40% less emissions for gas, positioning it well to serve as a “bridge” between hydrocarbons and renewables, speakers agreed.

“There are numerous energy outlooks and all project that renewable energy will be on the rise in terms of share. However, when we look at the short- to middle-term outlooks, and here I’m talking about 2040, in most cases fossil fuels will still be there,” said Xunpeng Shi with the Australia-China Relations Institute of the University of Technology Sydney.

“Yesterday we mentioned there is no future for coal. Yes, if you look at a century as a time framework, that’s correct. But if you look at a decade, the next two, three decades, that will not be the case, unfortunately,” Mr. Shi said.

What will make the biggest difference in emissions, he added, would be the switch from coal to natural gas. 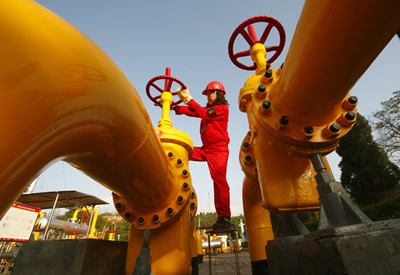 Using natural gas as a bridge is important since it will remain challenging to power a society or run an economy solely on renewables, such as solar and wind.

Shifting from fossil fuels is seen as a key way for countries to meet the climate targets to which they pledged under the 2015 Paris Agreement, including to limit temperature rise to less than 2 degrees Celsius above pre-industrial levels – the threshold after which global warming becomes dangerous.

“It’s important to remember that all our countries have committed to the Paris Agreement when it comes to reducing greenhouse gas emissions,” UNCTAD Deputy Secretary-General Isabelle Durant said.

Though renewables have become more affordable –  the price of solar panels dropped 60% between 2010 and 2017, according to Ms. Durant – they remain unreliable in many parts of the world.

“Gas is a partner of wind and solar,” Mr. De Buck said. “Maybe there’s not enough wind. Or there may be wind but not enough sun.”

“Covering peak demand with renewables on their own would be something very [expensive] and difficult to achieve,” he said.

Natural gas is a flexible source of energy and relatively inexpensive to store, and therefore could cover gaps left by renewables, helping keep down the cost of electricity and reduce Europe’s use of dirtier fossil fuels, he added.

Oil and coal together represents 50% of the primary energy mix in Europe, Mr. De Buck said. “Natural gas, today with the existing technology, can reduce the greenhouse gas effects, can reduce the local pollutants, if we act today,” he said, adding that gas is abundantly available in the long term.

The reliability of energy supplies is important not only to keep people from freezing in the winter, but also to keep industries up and running.

According to Rolf Traeger, a senior UNCTAD economist, three quarters of companies operating in the world’s 47 least developed countries (LDCs) suffer from power outages almost every two or three days, costing them about 7% of their income.

While renewable energy sources could help get electricity to the 62% of people living without power in LDCs, these nations must also focus on getting better power sources for their industries.

“Shortcomings in the energy sector in these countries represent a major obstacle to economic growth and development,” Mr. Traeger said.

“The energy supply which these countries should be looking for should be such that it meets the requirements of productive uses,” he said. “Think about the reliability which industry requires. Think about the scale of energy which is required for industrial use.”

Mr. Traeger said therefore that since the world’s poorest nations barely contribute to global greenhouse gas emissions they should be allowed to use their natural energy endowments to develop their economies, even if this means relying on fossil fuels for now.

But environmental experts are increasingly sceptical of the benefits of natural gas.

Though its main component, methane (CH4), has a significantly shorter lifetime in the atmosphere than carbon dioxide – around 12 years compared to more than 150 years – the global warming potential of CH4 is 28 times higher than that of CO2. Moreover, natural gas also produces CO2 when burned.

And according to the World Meteorological Organization, methane levels in the atmosphere reached a record high in 2016 at 1,853 parts per billion – about 257% above pre-industrial levels.

Fears of the effects that a push for natural gas could have on the environment have grown as the United States has embraced shale gas, UNCTAD economist Alexandra Laurent said.

The US produces 80% of the world’s shale gas supply, making it the top global producer of natural gas since 2009 and a net exporter since 2017. This is a dramatic turn of events for a country that had seen its net imports of natural gas steadily rise between 1987 and 2007.

But extracting shale gas requires fracking, the process of drilling into the earth and then injecting a high-pressure liquid into the rock to release the gas.

The extensive use of fracking in the US ­– it's expected to be used in 90% of the country’s gas production by 2025 – has prompted environmental concerns, mainly that the process wastes huge amounts of water and that potentially carcinogenic chemicals used may escape and contaminate water resources. There are also worries that fracking could provoke small, localized earthquakes.

For gas to gain acceptance as the “bridge” fuel it could be, Ms. Laurent said, the industry needs to gain favour with local communities.

“That is particularly significant as regards the methane emissions,” Ms. Laurent said. “I believe it is essential to improve transparency and follow up on the risks of methane leaks and leaks related to the extraction of shale gas.”

In May, UNCTAD plans to publish a report on the pros and cons of fracking.