Despite recovery efforts, a return to pre-pandemic levels of inward foreign direct investment is unlikely in the coming years. 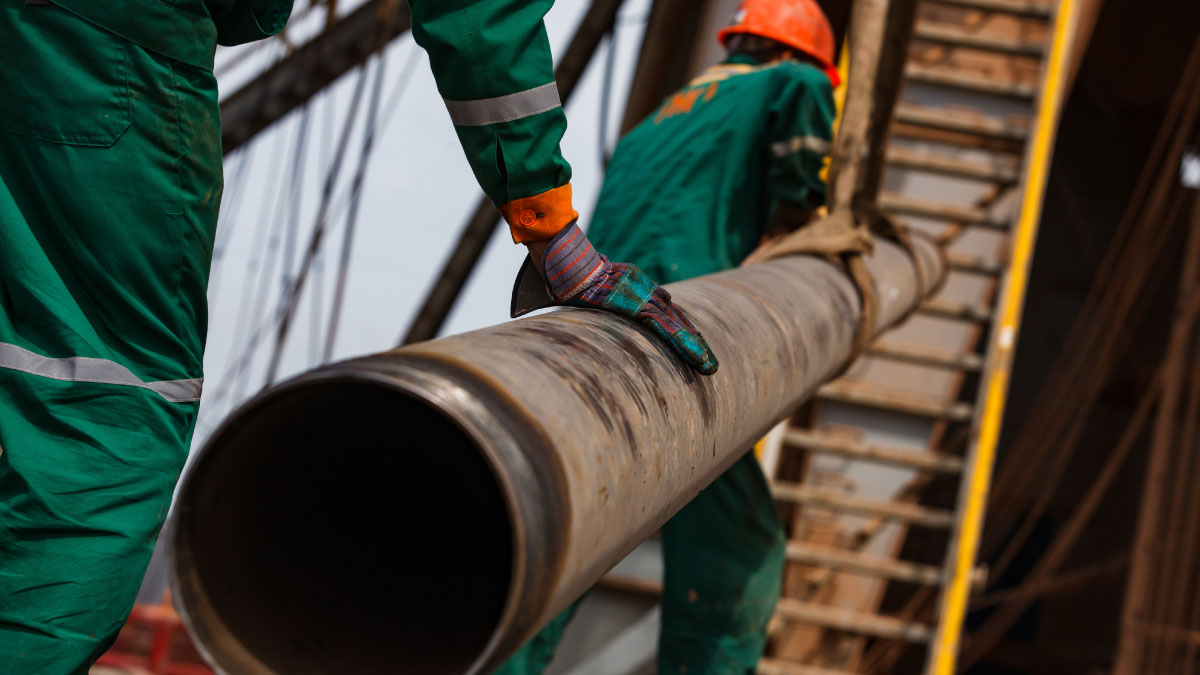 Workers at an oil deposit in Kazakhstan. © Alexey Rezvykh

Foreign direct investment (FDI) flows to the transition economies of South-East Europe, the Commonwealth of Independent States (CIS) and Georgia shrank by more than half in 2020, to $24 billion, their lowest level since 2003, according to UNCTAD’s World Investment Report 2021, published on 21 June.

“Despite recovery efforts, a return to pre-pandemic levels of inward FDI is unlikely in the coming years,” said UNCTAD’s director of investment and enterprise, James Zhan.

“The road to FDI recovery will be difficult, owing to slow economic growth affecting market-seeking FDI, the constraints of the pandemic limiting fast diversification, economic sanctions and geopolitical instability in parts of the region,” he cautioned.

The region’s share in global FDI inflows shrank to 2.4%. The contraction of inflows was far more severe in the CIS and Georgia (-64%) than in South-East Europe (-14%). Overall, only three countries in the region recorded higher FDI in 2020 than in 2019 – Belarus, Kazakhstan and Montenegro).

Pre-existing problems and economic vulnerabilities, such as significant reliance on natural resource-based investment (among some large CIS countries) or on global value chains (GVCs) (in South-East Europe), were exacerbated, amplifying the COVID-19-related contraction of FDI.

The largest recipients (the Russian Federation, Kazakhstan, Serbia, Uzbekistan and Belarus, in order of magnitude) accounted for 83% of the total inflows to the region.

The Russian Federation, which remained the largest recipient of FDI in the region, accounting for more than 40% of inflows, experienced a decline of 70% in inbound FDI, to $10 billion.

The fall resulted from both the pandemic and very low prices for raw materials, the latter exacerbated by the conflict between the Russian Federation and Saudi Arabia about oil prices in March and April 2020.

Prices have since recovered, as producer countries agreed to resolve the conflict and hold back production, but they remain far below their pre-crisis level. Severe lockdowns also weighed on production in the spring, resulting in a decrease of 3.1% in GDP.

One major exception to the overall decline of inflows to the region was Kazakhstan, the second largest recipient of FDI, where inflows grew by 35% to $3.9 billion.

Growing investment in mining, transport, financial services, telecommunication and energy compensated for declining inflows in construction, metallurgy and trade, which suffered particularly from the effects of the pandemic.

Most of the FDI in the country’s large hydrocarbons industry was related to the Tengiz megaproject with Chevron (United States), expected to be completed by 2022.

In Serbia, inflows declined by 19% to $3.4 billion. The COVID-19 crisis affected reinvested earnings in particular. The economic downturn also affected export-oriented activities, as problems in GVCs, of which Serbian firms had become an integral part, led to interruptions in production.

Manufacturing was the sector most affected by the FDI downturn, including the machinery and equipment, metallurgy and rubber and plastic industries. Despite the interruptions in trade and GVCs, the automotive industry still registered some expansions.

In Uzbekistan, inflows declined by 26% to $1.7 billion, despite the relatively good macroeconomic situation, with GDP expanding by 1.6% in 2020, and the country’s efforts to attract new FDI.

The law on special economic zones adopted in February 2020, for example, facilitated new investment projects in the energy sector, as well as in the telecommunication industry.

Inflows grew in Belarus (by 8%, to $1.4 billion), the fifth-largest recipient in 2020. The country adopted anti-pandemic restrictions later than most of the world and other countries of the transition region, and those measures were less restrictive than elsewhere.

Large inflows registered in the first quarter of the year were followed by three quarters of practically no net inward FDI.

The FDI outflows of the economies in transition, based largely on the activities of natural resources-based Russian MNEs, also suffered from the crisis and declined by three quarters, to $7.1 billion. The region’s MNEs saw their earnings drop, resulting in sluggish mergers and acquisitions (M&A) activities abroad.

Greenfield announcements by transition-economy MNEs remained limited in size compared with previous years and shifted their geographical focus towards transition and developing economies.

By value, outward FDI from the Russian Federation was directed mainly at Belarus, Germany, Switzerland and the United Kingdom in 2020. Russian MNEs also actively channelled their foreign investment through conduit locations, although the share of those locations has diminished somewhat in recent years.

In 2021, inflows to the region are forecast to start growing in 2022 only. While most of the region’s macroeconomic indicators are expected to improve by 2021 or 2022, GDP is expected to grow by 3.4% after a decline of the same magnitude in 2020.

Trade is forecast to rebound by a robust 6.5%, after a drop of 6.2% in 2019 – FDI is expected to recover to its pre-crisis trendline slower than these macroeconomic indicators.

The value of greenfield project announcements, the main indicator of investor intentions, also suggests a slow recovery in FDI. It fell by 58% to $20 billion in 2020, the lowest level ever recorded, and the number of announced cross-border project finance deals almost halved.

The decline was particularly steep in the region’s largest recipients of greenfield investment, such as Kazakhstan (-86%) and the Russian Federation (-67%), which will weigh heavily on levels of FDI to transition economies over 2021 and 2022.

The pandemic has also led the governments to revise their investment facilitation and promotion schemes, which might help bolster FDI over the next few years.

Although the focus is still on increasing the volume of new projects, considerations of diversification have been receiving more attention. At the same time, more attention is paid to intraregional connections, environmental issues and the green economy. 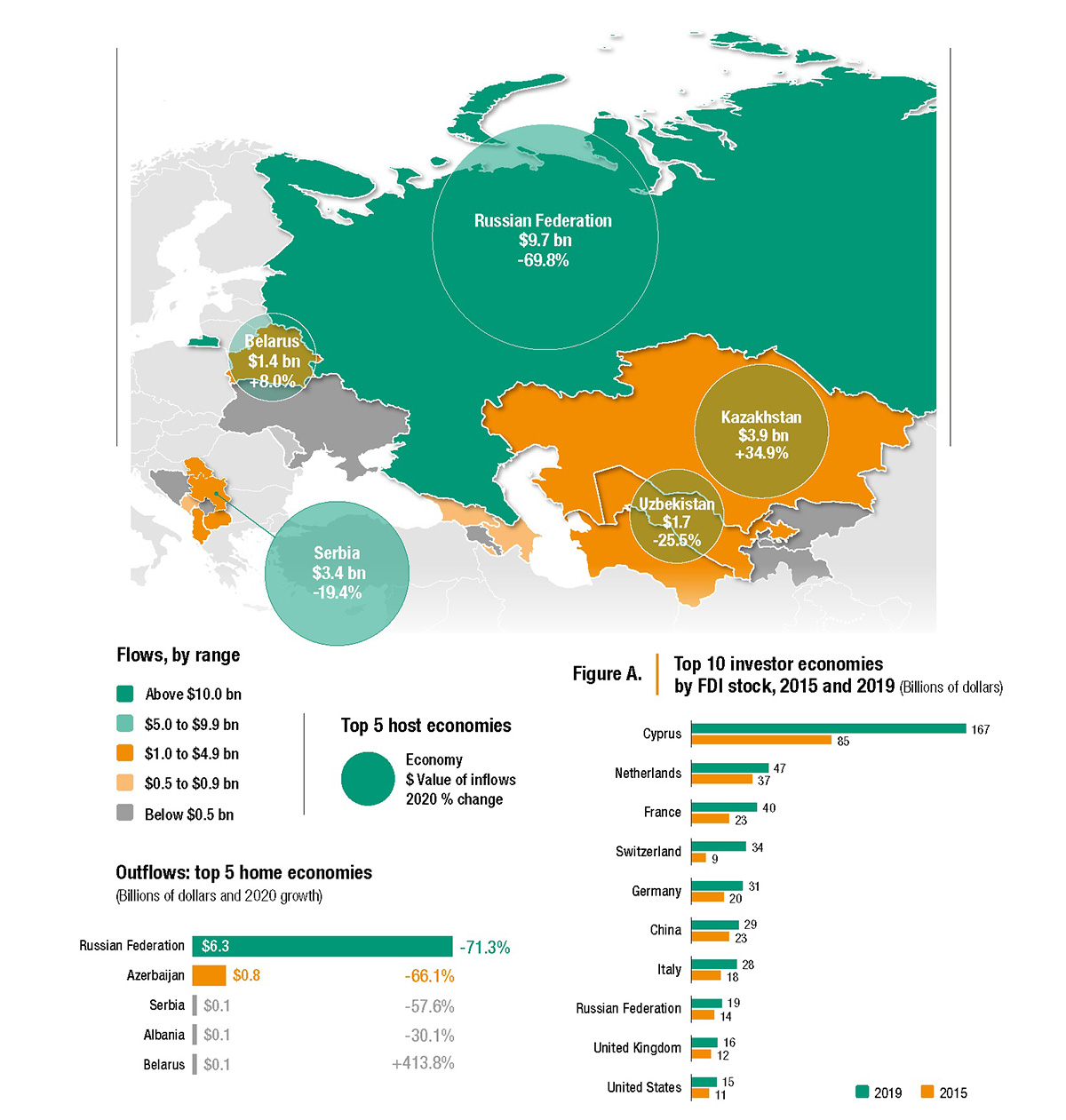