Fifty ministers and other government officials from African countries with significant mining sectors met in Addis Ababa, Ethiopia, on 20 December at an industrial development event at which UNCTAD presented its Commodities and Development Report 2017.

Kojo Busia, acting coordinator of the African Minerals Development Centre (AMDC), said that the message from the report, co-authored with the Food and Agriculture Organization of the United Nations, was clear: “Either we diversify our economies or we fail.”

Representatives from Ethiopia, Niger, Chad, and Madagascar, as well as from the United Nations Economic Commission for Africa (ECA), the African Union and others, received the report, titled Commodities Markets, Economic Growth and Development, from UNCTAD Africa office acting head Milasoa Cherel-Robson. 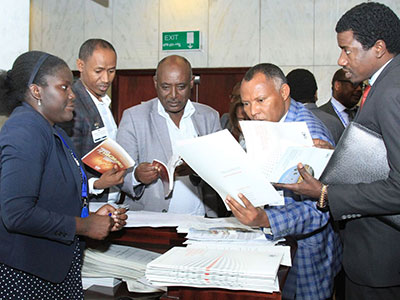 ECA Executive Secretary Vera Songwe said in keynote remarks that “in Africa, we are price takers. We have resources but at the same time we do not determine our prices.”

The report was presented during a session titled From Dependence on Raw Materials to Industrialization: Practical Steps for African Countries, part of a meeting on intersectoral linkages and capacity development.

Deliberations were informed by the report and a new Manual on Building Capabilities for Negotiating Contracts Aligned with the Africa Mining Vision. The manual has been produced by the AMDC, the African Union Commission and ECA.

Chad’s Minister of Mines, Geology and Quarries, Youssouf Abassalah said that African countries were adopting appropriate policies to diversify their economies thanks to assistance provided by UNCTAD.

Ambassador Alain Tehindrazanarivelo, Madagascar’s representative to the African Union and ECA, said he was grateful for their support for small-scale miners and research activities. He added that a new mining code was going through the Madagascan parliament and he was confident it would be adopted.

Kabine Komara, a former prime minister of Guinea who moderated the session, congratulated UNCTAD, the ECA, AMDC and the AU on their inter-institutional cooperation in organizing the event.

“What has begun must continue,” he said.