A greater synchronization of financial stress episodes among developing countries

While the financial crisis in Turkey was thought to have hit the bottom at the end of 2018, the vulnerability of the country is in the spotlight again.

A quick recovery from the crisis remains uncertain as a number of indicators are flashing red: foreign reserves have reached a critical level, domestic bond yields have rocketed and the ratio of nonperforming loans has sharply increased.

Many were quick to blame the fundamentals of the Turkish economy, mostly propped up by private consumption and investment fueled by foreign currency loans. 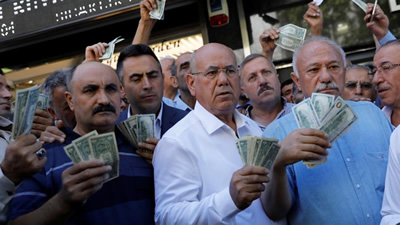 However, while domestic factors and political context remain relevant, the UNCTAD Publication “External Shocks and Financial Stress post the Global Financial Crisis” highlights that Turkey’s case is unfortunately not unique among developing countries. Rather it reflects flaws and structural imbalances in the international financial architecture.

The potential of these imbalances to destabilize financial conditions in developing countries materializes in the context of unexpected changes in monetary policy in advanced economies.

The analysis uses the UNCTAD financial conditions indicator (FCI). This is a composite index combining a large set of financial variables. It aims at measuring and tracking financial conditions in developing countries, and thereby, contributes to fill the gap between the growing complexity of the mechanisms underpinning financial instability and the scarcity of reliable measurement tools. By building on a dynamic factor model, the FCI has a number of advantages over other available international indices, which are mostly based on ex-ante weighted averages.

In the case of Turkey, the FCI had predicted a financial downturn as early as July 2017, one year ahead of the 2018 crisis. At a broader level, the FCI has performed well in signaling and capturing the effects of five external shocks on emerging markets.

Over and above the latest shock arising from appreciations of the dollar and global trade tensions, the indicators picked up the Fed taper tantrum (2013), commodity price shocks (2014), the renminbi shock (2015), and volatility relating to political uncertainty in the United States and the United Kingdom in 2016, with considerable precision, given substantial data limitations.

The paper shows that the six analyzed countries[1], including Turkey, have experienced a drastic surge in financial stress episodes from 2013, alongside greater synchronization of these episodes beyond regional boundaries.

Financial stress episodes invariably followed sharp declines in net capital flows to the six economies. The results emphasize the prominent role of external factors, such as exchange rate volatility, slumps in commodity prices and, to a lesser extent, yield gaps between US Government bonds and domestic long-term bonds. With little reason to assume that any of these external factors will stabilize soon, financial pressures, such as those affecting Turkey, are likely to persist or occur in other developing countries.

Three main policy lessons can be drawn from the findings of the paper.

Second, while efforts to implement macroprudential measures at the domestic level may reduce the degree of vulnerability to external financial shocks, the increased exposure to the global financial system, in general, and volatile capital flows in particular, diminishes their effectiveness.

Third, the complex interaction between global and domestic factors in the determination of financial conditions, as measured by the FCI, underlines the need for improved policy tools, such as capital controls, to increase the resilience of countries to global shocks. Greater and more inclusive global macroeconomic policy coordination is urgently required, if we are to prevent financial crises and re-instate a stable and development friendly financial landscape.

[1] In addition to Turkey, the six included countries are Argentina, Brazil, India, Indonesia and South Africa.