A better deal could bring benefits for producers of gum arabic, a natural and versatile ingredient used in food, drinks and chemical products.

Steeped in legend, gum arabic is not only an exotic commodity but also has the power to drive development in the African nations that produce it, which are among the poorest nations in the world.

A natural product derived from hardened acacia tree sap, harvested in the Sahel region of Africa, gum arabic is used primarily by the food industry.

UNCTAD is now spotlighting the huge potential of revenue growth that lies in transforming the commodity into processed export goods in a special gum arabic-themed issue of its Commodities at a Glance series.

The transformation of gum arabic production into more income-generating activities can not only promote economic development through higher incomes, but also to secure rural livelihoods, empower vulnerable groups, including women, and promote synergies with natural resource management and climate change mitigation.

“In a highly concentrated sector, UNCTAD proposes reforms from the micro to the national institution levels,” Mario Jales, an economist at UNCTAD’s commodities branch, said.

“The objectives are to ensure that all stakeholders get a fair share of the total value generated along the gum-arabic global value chain.”

The UNCTAD study says that the advantages of such an approach range from improving workers’ skills to increasing product differentiation and value addition, enhancing marketing and finance solutions and fostering political stability. 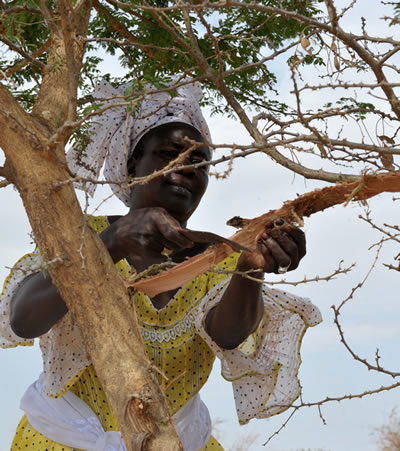 Given its many desirable properties, safety record and natural origin, gum arabic is the most commercially valuable of what are known as exudate gums – those secreted by plants.

It is used as a stabilizer, a binder, an emulsifier or a viscosity-increasing agent, not only in confectionery, soft drinks, wine, liquor, and dietary fibre, but also for non-food products such as pharmaceuticals, cosmetics, printing, ceramics, photosensitive chemicals, textiles, paper, ink, paints and adhesives.

In addition, exports of processed gum arabic more than tripled, from 17,000 tonnes to 53,000 tonnes in the same period.

The report shows that gum arabic is a promising commodity for producing countries due to its potential to generate foreign exchange, promote sustainable agriculture and forestry, ensure food security and combat desertification and climate change.

Virtually all internationally traded crude gum arabic is produced in the so-called gum belt: the vast arid wooded savannas that span sub-Saharan Africa, from Mauritania and Senegal, in the west, to Sudan, Eritrea, Somalia, Kenya and the United Republic of Tanzania, in the east. Crude gum arabic is also produced in smaller quantities in South Asia and the Arabian Peninsula.

Since the 2000s, however, Nigeria, Senegal and Sudan have produced high-grade gum arabic at local processing facilities.

During the same period, revenues from exports of processed gum arabic increased from $74.4 million to $192 million, 90% of which accrued to exporting countries in Europe.

Chad has made significant progress in recent decades both in terms of the quantities produced and quality.

Nigeria has been hindered by quality inconsistency, poor market organization and production disruptions due to the Boko Haram insurgency.

In Cameroon, Mali and Senegal, exports have started to rebound after decades of decline and stagnation.

In many other countries in the African gum belt, domestic gum resources remain underexploited, as in parts of Ethiopia, Kenya and South Sudan.

Notably, a single European manufacturer, France-based Nexira – which calls itself a “manufacturer of natural innovative ingredients for the food, nutrition and health industries” – is said to hold a 50% global market share in processed gum arabic products.