Improving the world's 48 poorest nations' productive capacities, thus enabling them to link effectively into the global economy, is vital for helping them to transcend the &quot;LDC&quot; category, experts told the Trade and Development Board.

A sessional committee of the Trade and Development Board (TDB) discussed on Friday morning the situation of the world's least developed countries (LDCs), focusing in particular on the Programme of Action for the Least Developed Countries for the Decade 2011-2020, which sets the target of having half the world's poorest nations on track to "graduate" from the category by the end of the decade. The Programme was the major outcome of the Fourth UN-LDC Conference held last year in Istanbul.

In the 40 years in which the LDC category has existed, only three countries have graduated - Botswana, Cape Verde, and the Maldives. One more - Samoa - is slated to exit in 2014. On the other hand, the recently born South Sudan is expected soon to receive official status as an LDC. 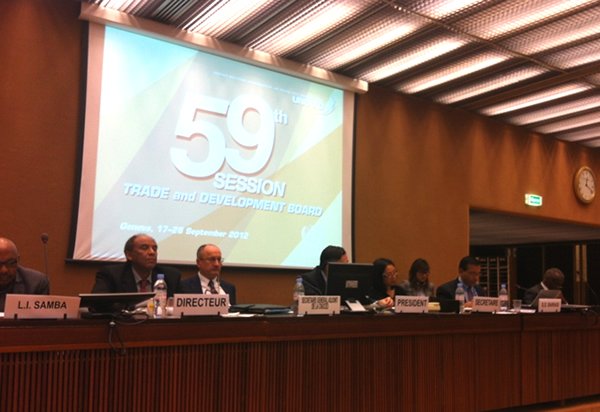 Trade and Development Board discuss UNCTAD’s contribution to the implementation of
the Istanbul Programme of Action for LDCs, 21 September 2012

Speakers said the key to spurring sufficient economic growth in such countries is to improve their productive capacities - that is, the abilities of their economies to produce goods of greater variety and greater sophistication both for domestic consumption and for export.

UNCTAD Deputy Secretary General Petko Draganov told the meeting that the Istanbul Programme of Action includes a comprehensive mandate for UNCTAD to carry out research and analysis, consensus building, and technical cooperation work related to LDCs. UNCTAD's principal objectives are to contribute to international consensus-building on trade and development issues of interest to LDCs, to draw the attention of policymakers to the development challenges confronting these countries, and enable them to build their institutional and human resources capacities in the areas of trade, finance, investment, trade logistics, and other areas.

Taffere Tesfachew, Director of UNCTAD's Division for Africa, Least Developed Countries, and Special Programmes, said that despite recent progress, LDCs' share of world trade is still less than 1% -- in fact only about half of 1% when oil is excluded. Also worrying is that LDC exports are not diversifying but instead becoming more concentrated on limited numbers of commodities. Foreign direct investment flows to LDCs, meanwhile, are a cause of concern because they "continue to concentrate in a few countries and in export-oriented primary production with low labour intensity," Mr. Tesfachew said. UNCTAD case studies on Zambia, Benin, and Cambodia reveal that the global financial and economic crisis has had serious impacts on LDCs, he said.

Leopold Ismael Samba, Permanent Representative of the Central African Republic to the United Nations Office at Geneva, said the proportion of the global population of extreme poor living in LDCs expanded from 18% in 1990 to 27% in 2000 to 36% in 2007. If these trends continue and nothing is done to reverse them, the objectives of the Programme of Action risk becoming nothing but a dream, he told the meeting. Expanding productive capacities in LDCs implies reinforcing investments in a number of critical areas - infrastructure and human, social, and environmental resources - and in sharing useful technologies and spurring successful innovation, he said. Although the task will not be easy, the emphasis placed on improving productive capacities is justified, Mr. Samba said.

Also contributing to the debate was a representative of the non-governmental organization LDC Watch, who told the meeting that it is fundamental that LDCs strengthen their domestic economies, especially in terms of "stronger productive capacities aimed primarily at meeting peoples' needs. This will lead to stable growth, employment generation, food security, and sustainable livelihoods. This will also bolster the target of graduation of at least half of the LDCs by 2020."