The world has 'lost the plot' over the link between jobs and socio-economic progress, and investors need to back pro-employment policies, experts told the World Investment Forum.

Investment agencies can guide international companies toward ventures that generate more and better local jobs in a way that respects human rights and creates winners all around, speakers said at the World Investment Forum on 26 October.

The session, organized by UNCTAD, the International Labour Organization (ILO), the Office of the United Nations High Commissioner for Human Rights (OHCHR) and the World Association of Investment Promotion Agencies (WAIPA) heard from investment promotion experts experienced in boosting links with local producers, overcoming labour and skills gaps and promoting the rights of workers, communities and consumers.

UNCTAD expert Anthony Miller said that the theme of the World Investment Forum – “Investment for Sustainable Development” – had at its heart the matter of creating jobs, while WAIPA Deputy Executive Director Ismail Ersahin said that this remained a priority of his members. 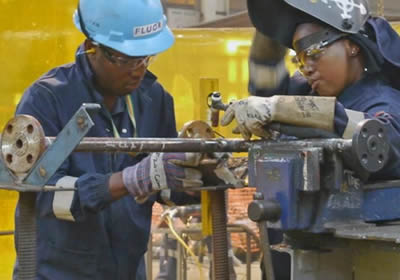 Moderator Vic van Vuuren, enterprise director at the ILO, said “the world has lost the plot” over the link between jobs and development.

More and better employment, especially for young people, was a precondition of attaining the Sustainable Development Goals, he said, and in some ways, the world was going backward with more than 100 million unemployed people today.

The ILO was also working on how people whose jobs will be taken by robots and artificial intelligence will be reemployed in climate mitigation sectors.

Adalberto Netto, chief executive officer of Brazil’s APD Parana, said there was a trade-off between the volume and quality of jobs, but government-backed incentives played a part in boosting quality.

“When you build a factory, why not build an R&D facility too?” he asked. The threat to jobs from automation will also apply pressure on governments to influence private sector behaviour in creating good quality jobs.

He said it was challenging to attract investment into sectors which require long-term planning like aerospace or pharmaceuticals, but investment promotion agencies needed to influence universities to train up high-skilled labour, as well as to anticipate the socio-economic risks and impacts of creating new industries. Collaboration between governments, investment promotion agencies and industry was critical, he said.

Alana Lansiquot-Brice of Invest Saint Lucia said that her focus was to attract investment into tourism, agro-processing and high-value services like architectural services.

For a small, vulnerable, island economy like Saint Lucia’s “the concept of linkages between investment promotion and job creation is critical,” she said.

Durban Investment Promotion Agency (DIPA) chief executive officer Russell Curtis – from the busiest port city in sub-Saharan Africa – said his organization had a mandate to “squeeze the lemon” of value chains on which the port sits to ensure that investment was directed into local jobs.

As a public sector spending body, DIPA ensured that 30% of its budget was dedicated to building innovation clusters and other projects for the creation of local jobs and boosting black-owned businesses.

Mr. Curtis said that investors needed to be reassured that their business could achieve the required scale to be profitable and was protected from uncompetitive practices.

Prerna Soni of Invest India said her country was set to become the world’s third-largest economy, and was already its youngest – with India’s young people due to become the workhorse of the entire world. To harness this, the government was providing entrepreneurship and vocational funding and training, as well as boosting the contribution of micro, small and medium-sized businesses to the economy.

“We want to train more than 100 million people by 2029,” she said, with a major focus on upskilling and reskilling.

"Walmart, the world's largest retailer, has committed to increase sourcing from women-owned businesses, and A.P. Moller-Maersk is contributing its expertise in cold-storage transport and facilities to improve Nigeria's tomato farming sector," he said.

Brooke Guven, a researcher from the Columbia Center on Sustainable Investment, said legal frameworks had a crucial role to play in “shaping the decisions that private sector firms make” when they invested.

Investment promotion agencies needed to look again at legal and governance frameworks to ensure that there were no gaps, Ms. Guven said, and that the “performance” of investment in creating jobs could be measured to improve policy to deepen “linkages”.

“There’s no one-size-fits-all answer,” she said, but more and more International Investment Agreements – often opaque instruments – had ever more detailed rules on “local content” which sometimes amounted to prohibitions.

Governments negotiating such agreements must be wary of these rules and make sure that they did not restrict them from acting in the interest of achieving the Sustainable Development Goals, Ms. Guven said.

Ricardo Pedroza, European Director of ProColombia, said that his country was now at peace after a 50-year civil war and investors were getting interested. Its recently adopted national action plan tried to ensure that investment resulted in good quality jobs and was directed to post-conflict regions.

Commending Colombia’s efforts to define a progressive pro-employment role for investment, Andrea Saldarriaga of the London School of Economics said the United Nations Guiding Principles on Business and Human Rights were directed at helping governments to balance the need to attract investment while promoting human rights.

Although the words “human rights” could scare some companies, Ms. Saldarriaga said, in fact, the best investors understood that respecting human rights made the most successful enterprises.

Andrea Shemberg, visiting fellow of the London School of Economics, said that business often liked to cherry-pick from among the Sustainable Development Goals when they touted their social corporate responsibility credentials.

“It’s a difficult conversation because each interest sees only part of the picture,” she said. “But in this session, we have been able to start to see more of the whole picture.”