Some 36 countries took a total 53 investment policy measures in the six-month period between May and October this year, most of them relating to the foreign investment and most of them were liberalizing in nature, according to UNCTAD's latest Investment Policy Monitor.

Boosting foreign investment is seen as an important means of reviving a stagnant global economy.

Among the most important policy measures are the adoption of new investment laws in Algeria, Myanmar, Namibia, and Tunisia.

Other important developments during the reporting period were the adoption of a comprehensive investment liberalization strategy in India, new procedures on the establishment of foreign enterprises in China, and policies to open up various industries in Bahrain, Indonesia, the Philippines, and Saudi Arabia. Brazil reversed its decision to allow full foreign ownership for domestic airlines. 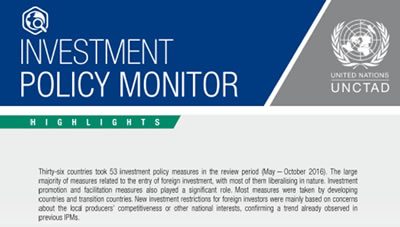