Global mining companies have made strides in cleaning up their act, but industry progress has yet to reach artisanal and small-scale mines, where the worst health, social and environmental ills continue to thrive, UNCTAD Deputy Secretary-General Isabelle Durant has said at an international mining forum.

Artisanal and small-scale mines, normally operating in the informal economy, produce a big chunk of the minerals we use every day -- about a fifth of the world’s gold produced each year, for example. The 25 million or so people working in these mines usually lack access to modern equipment and must use simple tools and highly toxic substances such as mercury and cyanide to extract and separate the minerals.

"In many mineral-producing countries, improving the health, social and environmental conditions in which those millions of people live will therefore be the difference between meeting the Sustainable Development Goals or not," Ms. Durant said in reference to the new global development package adopted by the international community in 2015.

Improving how artisanal and small-scale mines operate often requires easing the process to join the formal economy, so that new industry laws and norms can take hold. 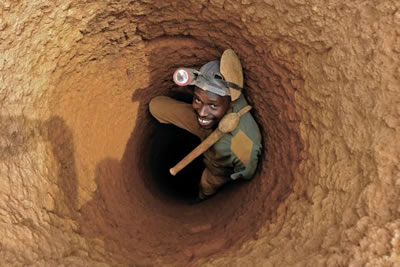 But for the formalization process to be sustainable, Ms. Durant said, policymakers should anticipate the constraints these newly formed small- and medium-enterprises (SMEs) will face as they leave informality, such as their lack of access to finance and technology, without which they will continue to rely on labour-intensive production models.

And governments must ensure that women are not pushed out as the mines formalize, she added.

"Generally speaking, women comprise some 30 per cent of artisanal miners. That is a lot. But as soon as you transition from the informal to the formal sector, the SME sector, well, to say it bluntly, there are no more women. Women disappear," Ms. Durant said.

"And the formalization of the sector therefore should not necessarily exclude women and should take into account from the outset equal access to skills and training for women who have come from or been working in this informal sector," she said, adding that UNCTAD recently created a trade and gender toolbox to help governments measure the likely impact that new policies could have on women's livelihoods.

Developed with the support of the Swedish government, the toolbox was recently used to assess how the possible trade deal between the European Union and the East African Community could affect female employment in manufacturing and agriculture in Kenya.

Ms. Durant was speaking at this year's general meeting of the Intergovernmental Forum on Mining, Minerals, Metals and Sustainable Development, convening in Geneva from Monday to Friday.

UNCTAD is a partner of the forum and hosts its annual general meeting.