Fifty years of occupation has driven the Palestinian economy into de-development and poverty, delegates at UNCTAD talks heard today, as the key messages of the organization's new report on its assistance to the Palestinian people were underscored.

Delegates at the Trade and Development Board - a two-week intergovernmental meeting on a broad range of issues related to international commerce - were urged to do more to support the Palestinian people and to ensure the implementation with Israel of a two-state solution in order to build sustainable peace in the region.

Addressing the repercussions of Israeli occupation since 1967, The Palestinian Minister of National Economy Abeer Odeh told the session that UNCTAD analysis showed that five decades of occupation has created cumulative consequences, with particularly negative costs for industry, employment and the agricultural sector.

"The consequences of occupation are more serious than we thought," Ms. Odeh said. "Israeli occupation has become essentially an act of colonisation...The occupying state must bear the costs of this occupation."

Occupation has hollowed out the agricultural and industrial sectors, the UNCTAD report says, and has weakened the ability of the economy of the Occupied Palestinian Territory to compete at home and abroad. With only one in every five hectares of cultivable land being utilized and more than 9 out of 10 hectares lacking irrigation, agricultural output shrank by 11%, and the sector's share in GDP fell from 3.4 to 2.9%, between 2015 and 2016.

The report reveals that the Palestinian economy has suffered yet another negative shock in the form of a 38% drop in donor support between 2014 and 2016, due in part to the occupation preventing previous aid flows from translating into tangible development gains. 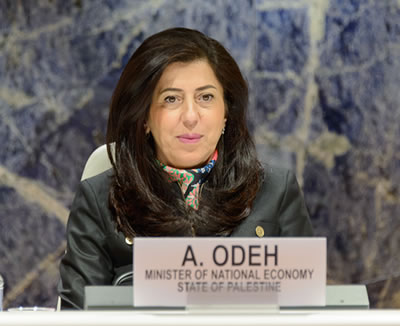 Pointing out a vicious cycle of tightening occupation, falling aid, economic collapse, leading to political discontent and further tightening, Mahmoud Elkhafif, the lead author of the report and coordinator of the Assistance to the Palestinian People Unit at UNCTAD, told the session that humanitarian aid has been used to plug major gaps.

"Most of the donor support has been used for damage control," Mr. Elkhafif said. "Falling donor support is a major shock to Palestinian economy and the international community should assume responsibility to support the Palestine people."

The G77 and China group were first to respond to the panelists, noting the significance of the substance of the report given that "future of Palestine people is as stake."

Expansionist policies of Israel, which intensified the expansion of settlements in 2017, were noted during the statement from the G77 and China group, who said they were "alarmed by continuing loss of Palestinian land and resources through settlement building."

Israeli settlements, which are a major obstacle to Palestinian economic development and the viability of the two-state solution, were also discussed in the statement delivered by Egypt on behalf of the Arab Group.

"The Arab group expresses deep concern over Israel's expansionist activities on Palestinian Territories," the statement said, highlighting how settlements remain the "main stumbling block" in search for peace in the region.

A statement from the European Union called for Palestinian institutions to become "stronger and more democratic" while also urging collective action from the international community.

"Affirmative steps are badly needed," the statement read. "We expect statements of intent to be followed with action on the ground."