Managers get training from UNCTAD to run well-functioning ports that spread benefits to local economies as well as ease international trade.

"As much as 80% of the volume of goods in the world are transported by ship," Ms. Durant said at the opening of the session, taking place in Geneva, 9–11 April.

"In addition to managing the goods they receive on time, ports – which are essential links in the global value chains – must prepare for the effects of climate change, rising temperatures, rising waters and of the emergence of extreme weather phenomena." 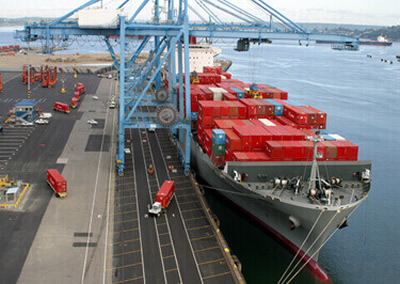 Other hazards include economic and financial instability and threats linked to cybercrime, Ms. Durant added.

It takes a village

With a well-organized port sector, trade volumes increase as transport costs decrease, economic competitiveness is boosted, and jobs are created – but modern port management requires that this is done while respecting social equity, preserving resources and respecting the environment. And as regulations evolve, the complexity of managing ports increases.

"The TrainForTrade programme brings together ports from all over the world in a single ‘village’ where information becomes power and a tool for the development and modernization of our ports," Tanzania Port Authority Operations Manager Ebel Mwasenga said.

For instance, Togo port manager Koessanh Komlan Amatchoutchoui improved crew well-being and efficiency by building a footbridge in the port of Lomé which helps sailors to disembark while their boats are docking.

In another case, TrainForTrade graduates installed an electronic system for tracking outages on the Intranet network of the port of Dakar, Senegal – more than 21 kilometers of cables and optical fibers. This made it possible to reduce the time it took to identify frequent outages from one day to one hour, increasing port productivity.

In Benin, a new system for assigning dockworkers has proved highly profitable thanks to an optical reading of fingerprints at the entrance to the Port of Cotonou. This resulted in the better filtering of accredited employees, and a more judicious distribution of dockworkers at loading and unloading docks.

"In Haiti, there is no training in port management," Haiti’s TrainForTrade manager Oswald Rousseau said.

The UNCTAD programme focuses on the development of human resources and fills this training gap.

UNCTAD also ensures that the impact of its programme is multiplied through the training of trainers, guaranteeing that its effect is felt not just in the same port, but also in port facilities of other developing countries.

In addition, with information and communication technologies, training can be provided at a distance, allowing a larger number of people to take part at low cost. UNCTAD issues an internationally recognized high-level "port certificate".

UNCTAD has been offering the TrainForTrade training programme to developing countries wishing to upgrade their port infrastructure for greater efficiency and performance for more than 20 years.

The meeting of the francophone network took place as part of Port Management Week in Geneva. More than 60 participants from 20 countries, are taking part in the event, which is supported by Irish Aid, Dublin Port Company, Port of Cork Company, and Belfast Harbour Commissioners.

TrainForTrade is supported by the ports of Nantes and Marseille in France, Dublin and Cork in Ireland, Belfast in the United Kingdom of Great Britain and Northern Ireland, and Gijon and Valencia in Spain.